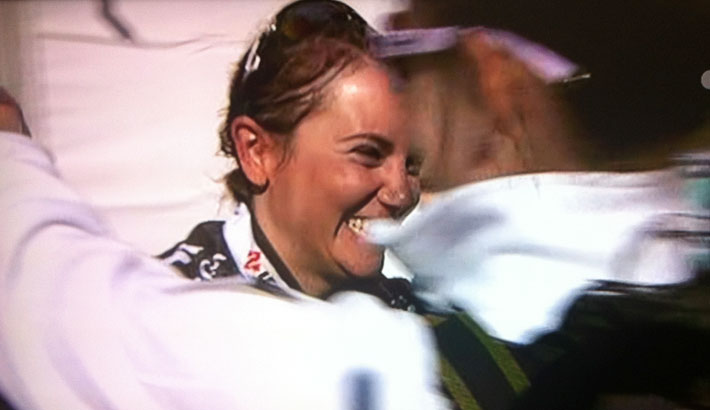 With previous Cycle Tour wins in 2008 and 2011, Stander won her third winner’s trophy after taking an early lead, and continuing to controll the race from the start.

Seven-time winner Anriette Schoeman was always lurking, and remained close until the closing stages despite losing some ground on the climbs approaching the finish, but the class of Stander allowed her a comfortable win of the women’s race.

Great race by @taylorchick1 to take the win. Close call avoiding a crash in the final straight. #CycleTour2014 http://t.co/yF50qxVYSG

The world’s largest individually timed cycle race, this year’s thirty-sixth annual 109 kilometre circular route from Cape Town round the Cape Peninsula and back kicked off just after 6am this morning. Early results suggested that veteran rider, and seven-times winner Dee Joubert, had finished in third position.

Stander has endured great suffering in recent times, first with the untimely death of her husband, world-renown pro mountainbike rider Burry Stander soon after their wedding, and more recently, with the passing of her grandmother.

Stander survives mountain biker Burry Stander, who was run-over by a taxi while on a training ride at Shelly Beach in KwaZulu-Natal last year.

“My gran was the anchor in my cycling career. She supported me since I was nine years old,” Stander said. “Over Suikerbossie (hill) I just kept thinking about her and Burry, and how much I wanted this win for both of them.”

“I’m extremely happy, they were the motivation that got me over the line.”