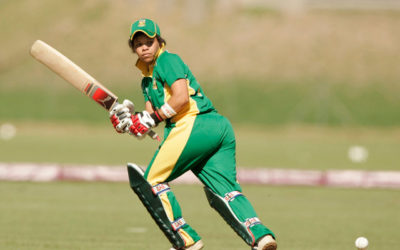 The experienced and versatile Claire Terblanche has been appointed Western Province Women’s cricket coach, and intends to continue the proud legacy left by her predecessor, the late Cobus Roodt.

South Africa Women won their Twenty20 match against Ireland Women at Crowthorne, Berkshire by the narrow margin of eight runs. The winners showed their inexperience in this form of cricket by allowing the Irish bowlers too many dot balls – 57 of the 121 balls bowled.

South Africa Women’s Cricket squad got down to business in Cape Town on Thursday morning in preparation for the ICC Women’s World Cup qualifier which starts on Monday, in the Western Cape.

Nathanael Christiaans gives the ball plenty of flight during her 100th first-class match for Boland during the weekend, taking two wickets in her team’s demolition of Free State in Kraaifontein. Picture courtesy Liam McAvoy Boland made sure to confirm their top-of-the-log position in the second round of the premier Super Sixes competition against the Free […]