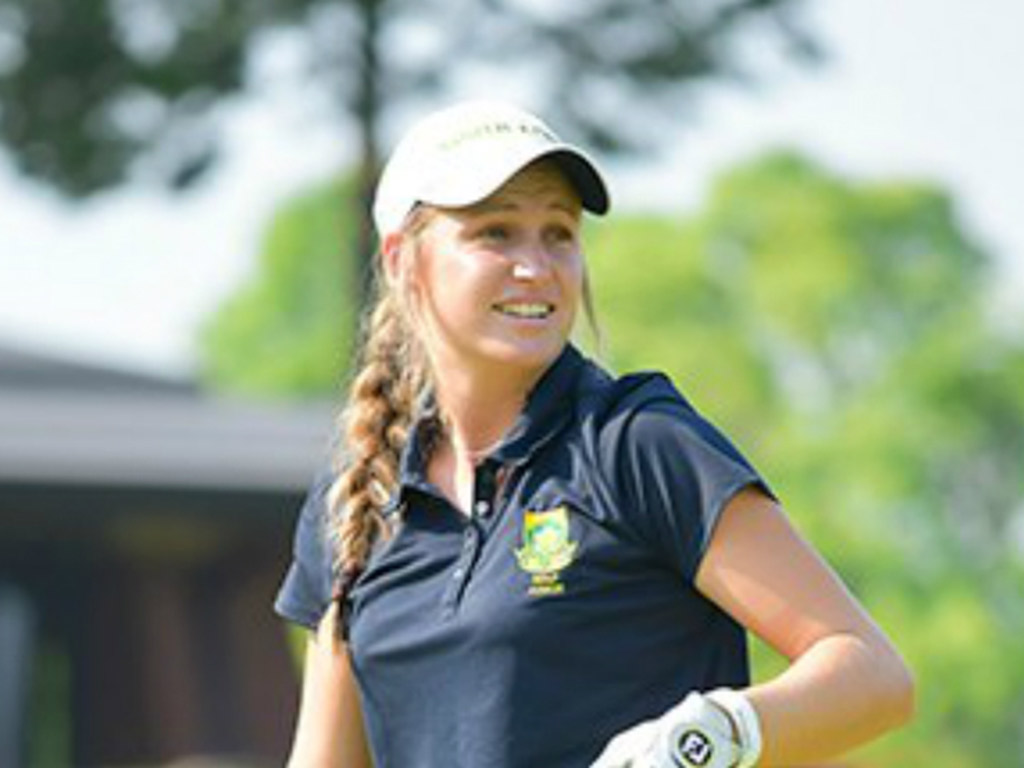 The South African trio will compete against more than 50 teams from across the globe at the O’Meara and Montgomerie Courses at Carton House in Maynooth from 29 August to 1 September.

Ashleigh Buhai, Stacy-Lee Bregman and Kelli Shean secured South Africa’s only victory in the history of the World Amateur Team Championships when they triumphed in Stellenbosch in 2006.

Telfer enjoyed great success as a junior and senior and held the number one spot in both the Open and Junior WGSA Rankings. A past Sanlam SA Stroke Play champion, she represented South Africa in the Youth Olympic Games in 2014 and the World Amateur Team Championship in Mexico two years ago.

The former GolfRSA Elite Squad player was a member of the victorious team that won the first girls competition at the All-Africa Junior Golf Challenge last year, and she represented South Africa at two successive Toyota Junior Golf World Cups in Japan in 2016 and 2017.

“Kaleigh has excelled since she took up a golf scholarship at Auburn University in 2017,” said WGSA President Sally Greasley.

“All her tournament rounds have counted towards the Auburn Tigers’ team score, and in May she was named to the Freshman Team in the Southeastern Conference (SEC), which honours the top performers of the season from the 14 institutions that form the conference. This after she became only the sixth first-year student to earn a top 10 finish in the SEC Championship in April.”

Former Sanlam SA Women’s Amateur champion Mistry and Macnab are both members of the current GolfRSA Elite Squad and rank first and second respectively in the WGSA Performance Rankings.

“Kajal has enjoyed a number of victories and consistently performed well to maintain the number one spot in the Open Rankings for nearly two years,” Greasley said. “She is in matric and playing a limited schedule, however, her runaway victory in the Nomads SA Girls Rose Bowl Championship in March, a runner-up finish in the Sanlam SA Women’s Stroke Play in April and fourth in the Individual Competition at the recent SA Women’s 72-Hole Teams Championship certainly shows she has lost none of her touch.

“Caitlyn broke through for her first provincial victory in the Ekurhuleni Women’s Open last year. She has performed extremely well this season and risen to third in the Open Rankings. A joint first in the Individual Competition in the team event at Waterkloof Golf Club last month once again underlined her blossoming form.

“Thanks to Mr Johann Rupert’s sponsorship of the GolfRSA National Squad, we are taking Kajal and Caitlyn to compete in the Girls British Amateur Championship ahead of the World Amateur Team Championship. I will accompany them, and Kaleigh and our Elite Squad national coach Val Holland and physiotherapist Sandra Winter will join us at a later date.

“We are extremely excited at the depth and experience of our three selected players. They have all earned their spots with consistently strong performances and excellent results this season and we are confident in their ability to compete at the highest level in Ireland.”

The competition is rotated among three geographic zones: Asia-Pacific, Americas and Europe-Africa.

The women compete in the Espirito Santo Trophy first, and the men follow in Eisenhower Trophy. In each round, the total of the two lowest scores from each team constitutes the team score for the round. The four-day (72-hole) total is the team’s score for the championship.

All the teams will be accommodated in the Athlete’s Village at the Maynooth University, which is just a 10-minute journey to Carton House.

Photo 1 caption: Auburn University standout Kaleigh Telfer has been selected in a team of three to contest the Espirito Santo Trophy for South Africa, in the 2018 World Amateur Team Championships in Ireland at the end of August. Photo: GolfRSA

Photo 2 caption: Leading amateur Kajal Mistry has enjoyed a number of victories, performing consistently to maintain the number one spot in the Open Rankings for nearly two years. Photo: GolfRSA

Photo 3 caption: Caitlyn Macnab broke through for her first provincial victory in the Ekurhuleni Women’s Open in 2017, and has performed extremely well this season to rise to third in the Open Rankings. Photo: GolfRSA