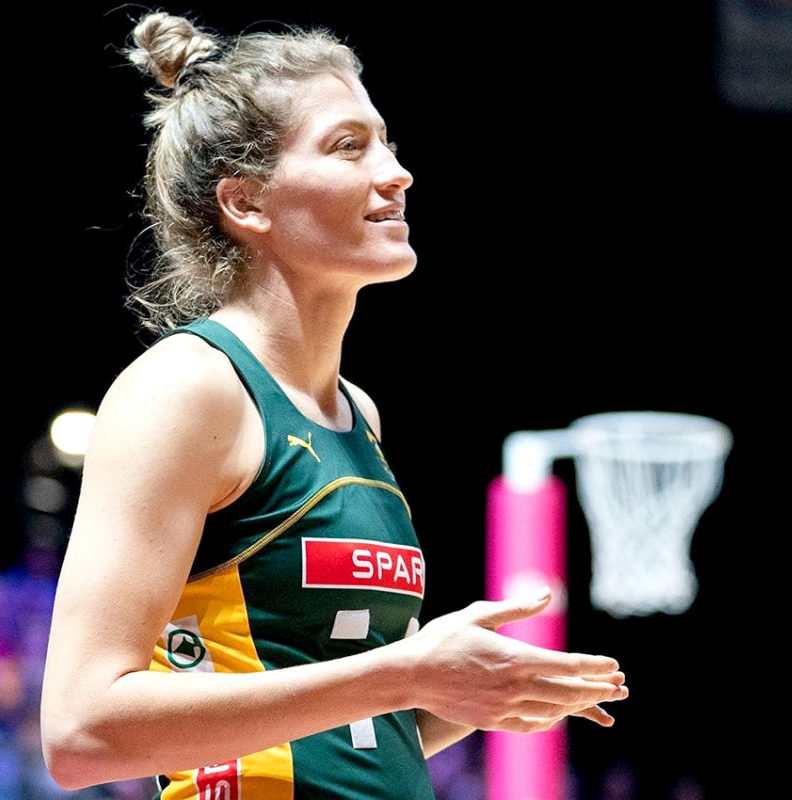 The SPAR Proteas Netball team may have been knocked out of the Vitality Netball World Cup two weeks ago, but that didn’t stop the SPAR Proteas from stealing the shine at the world’s prestigious tournament.

Not only did the pride of South African Netball make an unforgettable statement in Liverpool by putting up one of the best performances ever seen, the Spar Proteas shocked the world when they defeated the world’s second-best country, Jamaica in the group stages of the competition.

The fifth ranked side bowed out of the tournament finishing fourth, after they fell short of the third place following their 58-42 loss to England on 21 July, 2019.

ON TOP OF THE WORLD!!!Our very own Karla Pretorius wins the Vitality Netball World Cup Player of the Tournament ??? #NWC2019 We are #ProudlySouthAfrican ?????? #FlyTheFlag

Upon their return on Tuesday, 23 July, the ladies received a deservedly robust welcome, with hundreds of supporters gathering at the OR Tambo International Airport to welcome the heroines of South Africa. The warm welcome was topped off by a special dinner, hosted by the Minister of Sports, Arts and Culture, Nathi Mthethwa.

Karla Pretorius stole the headlines in almost every media house worldwide, following her superb performance for the Proteas.

The experienced Goal Defence and Wing Defence playmaker made an impact for her team, and had been a pioneer from the opening game until the very last encounter.

The 29-year-old’s sublime performance saw her finish the competition as the Player of the Tournament. It came as no surprise that the East London-born player was in the receiving end of such an amazing honour, following what was one of the finest displays of netball skills and talent ever witnessed.

Even with the 2019 Vitality Netball World Cup edition having come to an end, Karla remains the talk of the town on the lips of every fervent netball supporter, after she set England alight with her sterling talent.

The spotlight continues to shine upon Karla and understandably so. It’s not every day one gets to sweep the world by storm, especially considering the calibre of the competition.

gsport caught up with Karla, who shared her incredible experience:

How was the overall experience in Liverpool?

Memorable one for the team and myself! Any time you represent your country it is special, but big events (biggest netball event) like a World Cup is always that little bit more special!

What was your highlight of the tournament and why?

The win against Jamaica – we worked a long time towards this specific game and getting the win was great because we knew it will make the road going forward in the World Cup a bit easier.And, getting the Player of the Tournament Award!

What does that accolade mean to you?

Honoured, grateful and very proud! Knowing that this was not just an award for myself by for South Africa. I’m not just representing myself, but my family, my team, South Africa and my story.

How have your teammates reacted to this amazing gesture?

They were very happy for me, and I was very thankful towards them. We celebrated the team’s performance during the World Cup, and this award because it wouldn’t been possible without the “team”!

How does it feel to be centre of the world’s attention? Looking at the recent reports from across the world about you.

Grateful, but keeping my feet on the ground.

What is your message to South Africans that were supportive of the team during the World Cup?

The support we got from home was wonderful. We were in awe of all the support and the messages we got! It really places that extra “fire in our belly” to make the country proud. We can never say thank you enough!

Photo 2 Caption: The SPAR Proteas wing defence is presented with the prestigious Player of the Tournament award at the trophy ceremony of the Vitality Netball World Cup. Photo: Reg Caldecott

Photo 5 Caption: Pretorius waves in appreciation for the crowds’ support after receiving her Player of the Tournament honours at the M&S Bank Arena. Photo: Reg Caldecott/Gallo Images