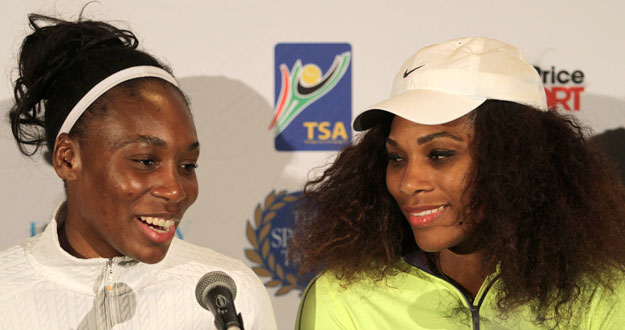 International tennis superstars Venus and Serena Williams have given South African tennis the thumbs up on a whirlwind stop over in South Africa, as part of the Breaking the Mould campaign.

“There are some good SA players that are on tour. Africa as a continent has a lot of potential and talent and with the right support, the players can reach the top,” Venus told a packed press conference after the dynamic sister duo jetted into SA from Lagos, Nigeria on Saturday.

Breaking the Mould is a development initiative by Octagon SA aimed specifically at acknowledging and recognizing women of all ages, who have broken the mould whether at home, play, at work or in their communities. These are women who have risen above their own set of challenges and hardships to succeed and inspire.

After speaking to an enraptured media contingent, the Williams sisters held a coaching clinic at the Arthur Ashe tennis stadium in Soweto, where many of their young adoring fans were excited to see them. “We had a wonderful time in Nigeria and we are looking forward to everything we’re going do in South Africa,” Serena said.

“It’s a great honour to be here. It’s my first time in South Africa and it’s been a wonderful experience so far. The Breaking the Mould campaign is such a good idea. If we can inspire even one person, that would be great,” Venus added.

Tennis South Africa President Bongani Zondi watched as Venus and Serena played some games with the youngsters gathered at the Arthur Ashe stadium, saying this is a dream come true for him and the children of Soweto.

“This visit is long overdue. We’ve wanted to bring them to South Africa for a long time now,” Zondi says.

“We have seven hubs of development in the country and there are more girls playing in those hubs than boys. I am so excited about this visit; I believe it’s really going to inspire our girls. There are over 2 million people in Soweto and there’s no reason why we shouldn’t have champions coming from this area. “

According to Tennis South Africa CEO Ian Smith the support is there but they could do so much more ifthey had more funding. “The state of women’s tennis in South Africa is good but it can get better.

“There’s a lot more we have to do but it takes a lot of money,” said Smith. “We don’t have sufficient funding. Our junior players don’t have enough tournaments to play in South Africa where they can get ranking points which is why it’s so important that we have a tournament like the Soweto Open.”

“Currently we only have one female player in the top 100 in Chanelle Scheepers. Chanelle had to do a lot of her own funding when she started playing overseas, and most players can’t afford to do that and end up giving up tennis. It’s really tough without money. We need more funding. The players need to have permanent coaches,” Smith says.

“You need good developmental programmes to groom good players. That support starts at home. Parents should support their kids. The way we were brought up played a big role in our career. Our religious background has kept us grounded,” said her sister Serena.

Venus has some very simple advice for the aspiring female players in South Africa. “They should pick a role model and let themselves be inspired by that person. It’s important to surround yourself with good people who inspire you.”

The young players at the Arthur Ashe stadium have certainly chosen their role model well. “Venus and Serena have showed me that it takes a lot of dedication and commitment to succeed. I admire them a lot and it was both nerve racking and exciting to meet them and play with them today,” 16-year-old Phumelele Kubeka says.

“I was extra scared going on court today. I have been playing tennis for about 10 months now and this was a really great experience,” 12-year-old Tumi Sehere says.

Venus and Serena’s next task on their visit will be an exhibition match, which will be played at the Ellis Park Indoor Arena on Sunday November 4. Don’t expect the sisters to go easy on each other just because it’s an exhibition match though. They have always been very competitive with each other on court and Serena will be looking to avenge her 6-4 7-5 loss to her sister in Lagos.