The 2007 Ladies European Tour (LET) season begins this week with the US$1.2 million Women’s World Cup of Golf at the Gary Player Country Club, Sun City, South Africa, from 19-21 January.

A total of 22 two-player teams are representing their respective countries in the unique tournament, which is co-sanctioned by the LET and the Ladies Professional Golf Association (LPGA).

Team Sweden is the defending champion after world no.1 Annika Sorenstam and Liselotte Neumann won the tournament at the same venue last year with a total of seven-under-par 281.

Sorenstam and Neumann will not be defending their title, (Sorenstam citing exhaustion as the reason for stepping down), but the Swedes have a strong team in Carin Koch and Helen Alfredsson, The 2007 European Solheim Cup Captain, who is making her debut in the tournament.

Scotland, which was represented by Janice Moodie and Catriona Matthew in 2005 and 2006, finished three shots back in second last year while the Welsh duo of Becky Brewerton and Becky Morgan finished four strokes further back in third.

The two Becky’s are making their third consecutive appearance in the tournament and hoping that they can continue to improve on their previous successes. They finished sixth in the inaugural Women’s World Cup of Golf at Fancourt Golf & Country Club in 2005.

Moodie, who finished joint fourth with Matthew in 2005, will compete again for Scotland but will partner with Mhairi McKay this week. The pair earned a place in this year’s field at the last minute following the withdrawal of the Philippines’ team on Friday.

Moodie will make her first appearance on the links since she gave birth to son, Craig McLean, at the beginning of September.  Moodie has not competed in an event since the ShopRite LPGA Classic in early June 2006.

Any one of the 22 teams is capable of winning the prestigious Women’s World Cup, but particularly strong teams have been fielded by Sweden, Scotland, England, France and the USA.

The experienced duo of Laura Davies and Trish Johnson combine with 84 tournament victories to represent England. Davies won most recently: at the SAS Masters in Norway in August and she comes off a terrific 2006 season in Europe in which she won the official New Star Money List.

France’s Gwladys Nocera and Stephanie Arricau won a combined total of five LET events in 2006 and could pose a significant threat for the title.

The team from the United States is expected to perform well as LPGA Tour and World Golf Halls of Fame member Juli Inkster will tee it up with partner Pat Hurst.

Experience should be key for the U.S. team as Inkster and Hurst, who are both coming off victories during the 2006 LPGA Tour season, combine for 36 career wins and more than $16 million in career earnings.

Australia’s rising star Nikki Garrett, who was last year’s Ryder Cup Wales Rookie of the Year in Europe, will make her debut in the tournament, as will her playing partner, 27-year-old Lindsey Wright.

Garrett had nine top 20 finishes in 2006 and finished third in the Wales Ladies Championship of Europe and the SAS Masters in Norway. Despite being her debut in the competition, it is not her first time to South Africa as she competed on the Nedbank Women’s Golf Tour earlier in the year.

This year, the tournament organisers have decided to change the routing of the course so that the contest ends on the course’s par-five ninth hole. With its island green, the signature ninth (which plays as the 18th  for the event) is a dramatic hole which will offer an eagle opportunity.

Another interesting change to the tournament is the order of play. The singles matches will now take place on the first day, (Friday), with foursomes on day two (Saturday) and betterball on the third and final day (Sunday). 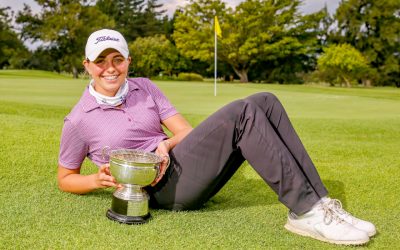