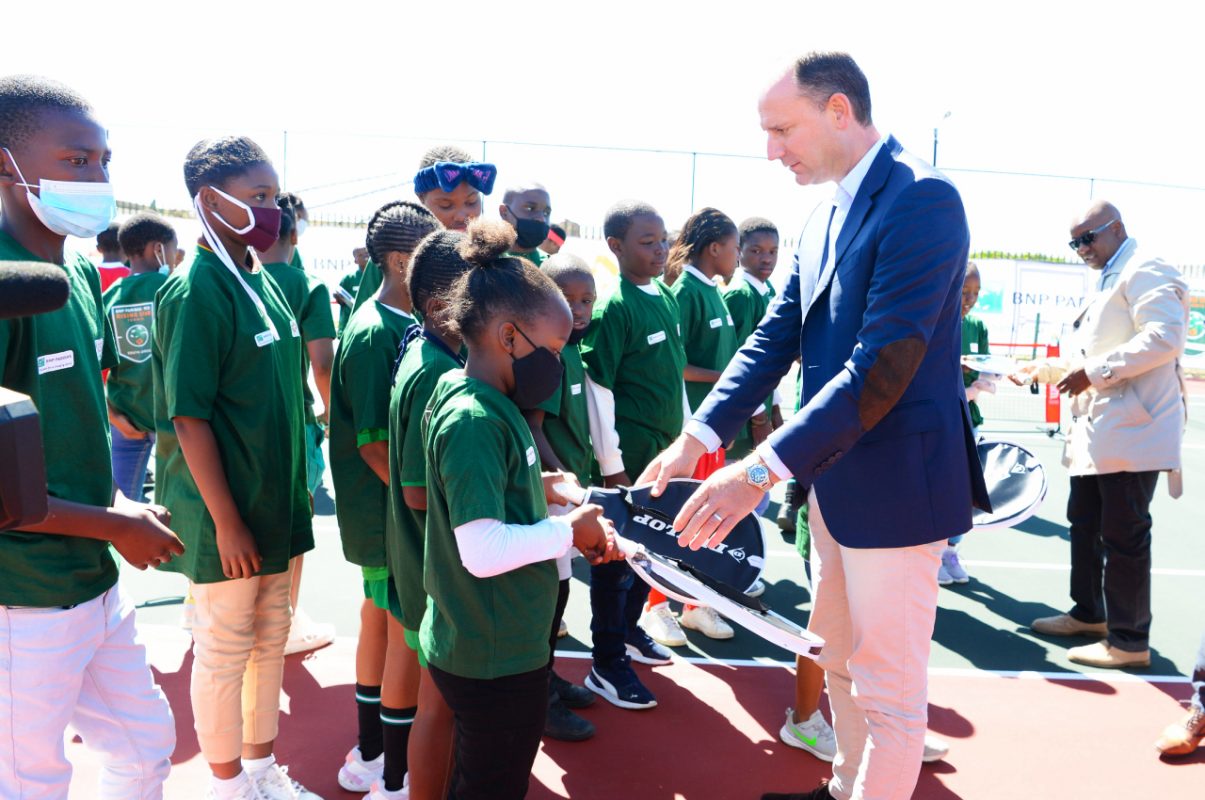 BNP Paribas RCS Rising Star Tennis will be expanded even further this season, after such a successful series last year.  This will extend the reach to more children and schools to make a bigger difference through social development initiatives as the programme returns for a highly anticipated third edition in 2022.

The news comes as BNP Paribas, and their wholly owned consumer finance subsidiary RCS, announced their continued commitment on Wednesday to the partnership with Tennis South Africa (TSA) and a third edition of the programme to grow the game across the country.

Launched in 2019, the Tennis SA development project involved over 2 000 children and nearly 400 primary schools. After a break in 2020 due to the COVID-19 lockdown, the series returned with a bang last year, reaching over 3 000 children from nearly 800 schools in 40 districts around SA after the campaign was expanded to include high school and wheelchair tennis divisions.

Again, catering for primary school, high school and wheelchair tennis players this year, the BNP Paribas RCS Rising Star Tennis series will target 1 200 schools as it continues to grow the sport of tennis through grassroots development, taking the game to the youth around the country, including disadvantaged communities.

2022 – an increased focus on community infrastructure and impact

More than just a development competition, the BNP Paribas RCS Rising Star Tennis will again reach out beyond the court to grow the game holistically – from talent to infrastructure.

This year’s focus will address the shortage of equipment and playing surfaces by including multiple tennis activations, with a focus on Namakwa (Northern Cape), Mafikeng (North-West). Ehlanzeni (Mpumalanga) and Central Karoo (Western Cape) where tennis equipment will be donated to schools in these communities to help them prepare for the series.

This year’s campaign will support 24 schools around the country, including Baikagetse Primary School in Daveyton, with the sponsors having committed to providing equipment to create more opportunities for the youth in these communities. In addition, Baikagetse Primary School’s tennis court facility was upgraded. Tennis was introduced at the school in 2019, with their team finishing sixth at the Benoni leg of the inaugural BNP Paribas RCS Rising Star Tennis competition. Since then they have struggled to grow the sport due to a lack of proper facilities and resources. In response to this, Tennis SA has ensured the court at the school has been revamped and that the pupils have received all the tools they need to develop their talent and compete at their best.

CEO of BNP Paribas Corporate and Investment Banking (CIB) South Africa, Kieran Fahy, commented: We are delighted that the Rising Star Tennis Initiative will be continuing for a third year.  It has already achieved so much success in terms of growing grass roots tennis in South Africa.  Tennis is part of BNP Paribas’ DNA, and the Group supports many tennis initiatives across the world.  Not only is this part of our tradition to support the sport, but this programme also reflects BNP Paribas’ Environmental, Social and Governance values – creating an impact that extends beyond a tennis court, into the communities and economies in which we operate. This impact is also reinforced by BNP Paribas’ Coaching Mentorship Programme, which trains and develops tennis coaches in disadvantaged communities to make tennis accessible to everyone. We believe that there is immense potential for these two initiatives to support the growth of the sport in South Africa.”

CEO of RCS Group, Regan Adams commented: “At RCS we believe that sport is one of the most crucial forms of social upliftment and mobility. We only need to look at the history of our country to understand the potential that sport holds to unite and uplift us. The Rising Star Initiative therefore perfectly aligns to our Social Responsibility focus of uplifting youths through sport. Since 2019, we have been encouraged by the impact that the series has had on the lives of countless youth from around the country. With the focus on tennis infrastructure development this year, we hope to create even more impact by supporting Tennis South Africa in the renovation of sport facilities and sponsoring of equipment within these communities.

Tennis SA CEO Andre Homan thanked BNP Paribas and RCS for their continued support to grassroots tennis in South Africa, “We are very fortunate to have the support of BNP Paribas and RCS Group who continue to invest in grassroots tennis and helping to make our sport more accessible to all communities in South Africa. The additional support this year towards facility upliftment and provision of equipment is a true game-changer in addressing challenges of playing surfaces and equipment.

Entries for the 2022 BNP Paribas RCS Rising Star Tennis series will open on 13 April and close on 31 May. This year’s district and provincial events will be held across South Africa between June and October, and the Finals will be played between 4-6 November in Gauteng.