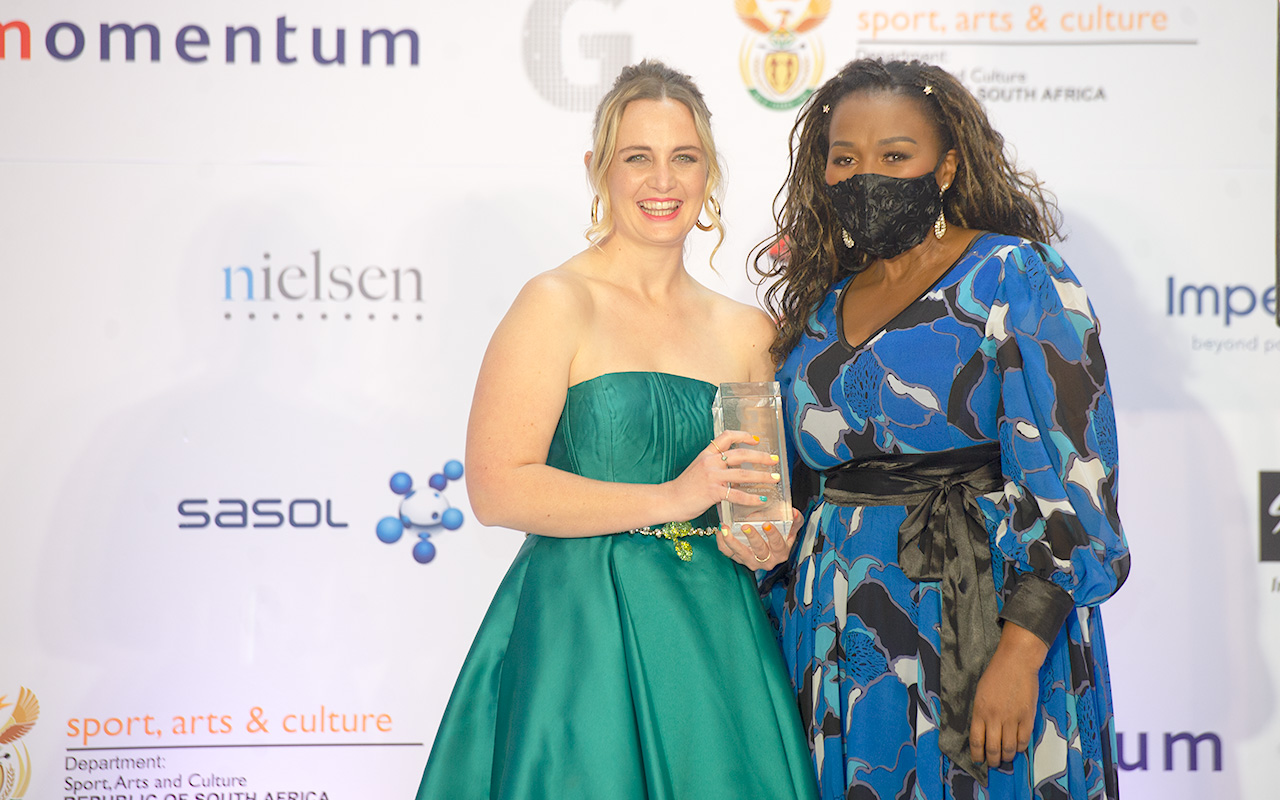 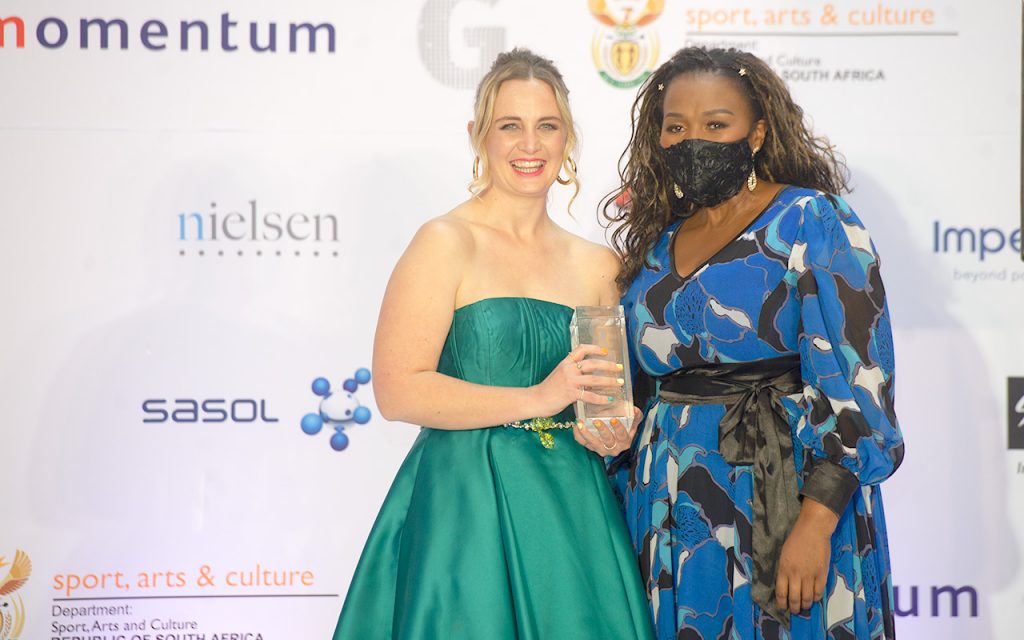 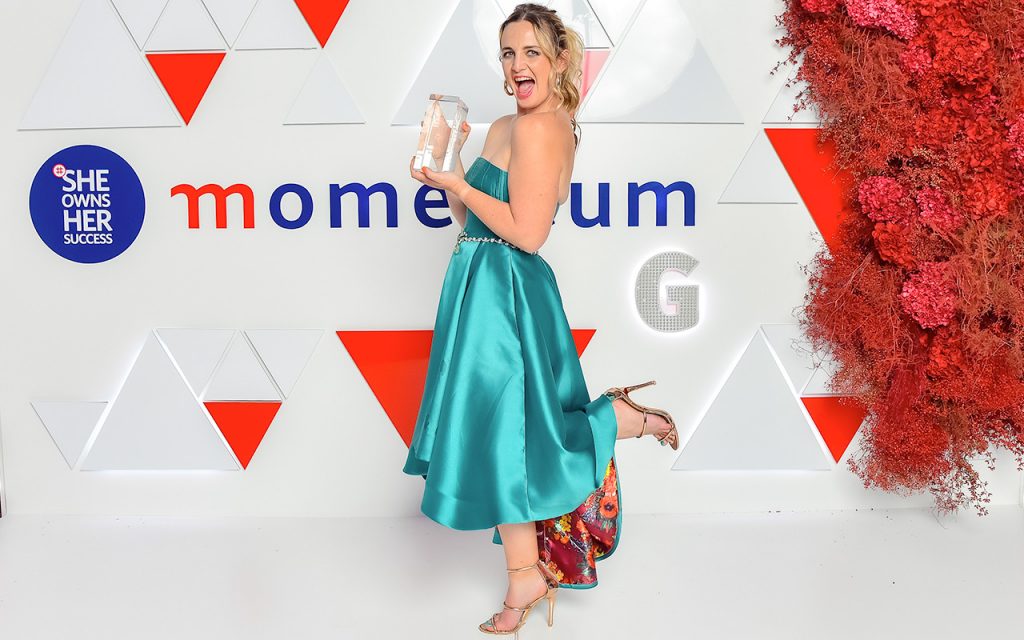 2021 Momentum gsport Woman in Radio recipient, Cato Louw, is defying stereotypes in the sport broadcasting industry as she aims to support and guide the next generation of broadcasters.

Winning on the #gsport16 awards stage has fuelled Louw’s passion to showcase sportswomen both on and off the field.

She says receiving the nod from fellow women in the industry has inspired her to give back to young girls who aspire to be in sport.

Hailing from Eastern Cape, Louw has risen from community radio and now finds herself on EWN Sport as the afternoon sports anchor on KFM and CAPETALK radio stations.

She is also fortunate to be a Rugby Anchor for SuperSport, covering tournaments like Currie Cup, Varsity Cup and United Rugby Championships.

Speaking with Selina Munsamy, Louw reveals her career aspirations and women in sport who she draws inspiration from.

Cato, thank you for taking the time to chat with us. In 2021 you picked up the Woman in Radio award at the Momentum gsport Awards – what was that moment like for you?

Oh, it was so awesome!! I’ve been following the work that gsport have been doing since my campus radio days and to be in the mix was just such an honour!

Especially, after the challenging year that everyone had and sport had as well – it was really great to be recognized.

How has winning on the gsport stage inspired you?

It’s definitely fuelled the fire! I am a passionate person in general and getting the nod from fellow women in sport just makes me want to do more and make sure we continue building and showcasing these sportswomen and teams whether on the field or off it.

Also, being able to interact and be part of the community certainly helps me to see what’s going on and what needs to be done.

Please describe what your experience at the event was like.

I was flown up and at the airport, there was a lady with a sign with my name on it and then we were ushered to get fitted for some beautiful dresses for the event.

The next day – breakfast and make-up and bubbly all around! It was so cool to see some heavyweights in the industry and also be one of them for the night.

Walking across that stage and hearing your name is incredibly special, knowing what you put in daily in an industry that might look ‘easy’ or ‘straightforward’ to outsiders. It really was unforgettable!

Let us get to know you a bit more – please tell us about yourself.

I’ve been a sports anchor on radio and TV for the last 6+ years. I work for EWN Sport as the afternoon sports anchor on KFM and CAPETALK radio stations. I’m also in the fortunate position to work for SuperSport as a Rugby Anchor, covering tournaments like Currie Cup, Varsity Cup, United Rugby Championship, and more.

After school, I studied Sports Science in Stellenbosch – with my big dream of being part of the Springbok team. At that time radio was always on my mind and I joined campus station called, MFM 92.6 as a volunteer to gain some experience in the industry.

I was there for 6 years where I started from the bottom, the 3am morning slot – from there I moved through the ranks hosting music-specific shows then the Drive show, and then eventually the Breakfast Show which we won “Best Campus/Community Breakfast” show at the 2016 National Radio Awards.

All that unlocked the idea of actually combining my love for sport and broadcasting as a job! And so, the journey began.

How did you get into sport reporting / broadcasting?

After starting at campus radio in Stellies, I still wanted to be involved in sport as I was still studying Sports Science at ETA and probably had to let go of being a member of the Springbok backroom staff. There were surely other ways to promote and be a part of sport, right?

Through the station, I could get involved from the inside with games and also conduct relevant sport interviews for the station. At the station, they encourage you to learn and to explore areas of the industry you enjoy and pour yourself into it – that’s exactly what I did.

What has been the most memorable event that you have worked on?

My first major international event was the Cape Town Sevens, for me that was memorable because being a fan and always wanting to attend (and just the event as a whole) – it was quite amazing to be able to be part of the media contingent to cover the event. It continues to be one of my favourites!

Another one was the Match in Africa which saw Roger Federer play a charity match against Rafael Nadal in front of a record-breaking crowd. A very special and memorable event as well! I am a huuuugge Federer fan, so I was also quite starstruck!

What are you hoping to achieve as a woman in the sport industry?

Over the last couple of years, I have received so much support and guidance from the other women in the industry and I would like to continue that for the next generation. And, make sure that we don’t have to keep the door open because there will be no door and these opportunities will be available for all women as much as it is for men.

I just want it to be equal.

What are the biggest challenges women face in the sport space?

Several things, but I would say one of them is not being taken seriously – people are still surprised when you say you work in rugby and actually know what you are talking about.

So, that mindset filters into the rest of the industry and how/where they appoint women and of course how they see them.

They expect a much higher standard from you as a woman, because you need to consistently ‘prove yourself’ and that is tough because failing isn’t an option in their (public) eyes.

Who is your role model and why?

Definitely my parents, the way they support and encourage me and how they approach life really inspires me.

In the industry, Motshidisi Mohono, Julia Stuart and Kass Naidoo to name a few. They were some of the first female voices and faces I’ve seen in the South African sport scene and have been encouraging throughout my journey, while they continue to grow and set the bar.

Where do see yourself and women’s sport in the next few years?

I honestly believe that women’s sport is the ‘next big thing’ if one can put it like that, overseas you can see the investment and growth in the women’s game from football, rugby and especially cricket. And, I think that if you are not actively investing in it now, you are going to miss out.

So, I see women’s sport growing immensely and that SA will have more women who can call themselves ‘professional cricketers/netballers etc, due to them earning an actual salary and being able to compete in tournaments and games regularly. I also hope we have more home games to grow the fanbase of our teams.

I of course want to be involved in all of that! I would like to still travel internationally for my job and cover more international events and maybe even host a podcast or TV show.

What advice would you give to a young girl wanting to pursue a career in sport?

Don’t be discouraged. Keep working and asking questions and inserting yourself where people want to close the door. Keep knocking.