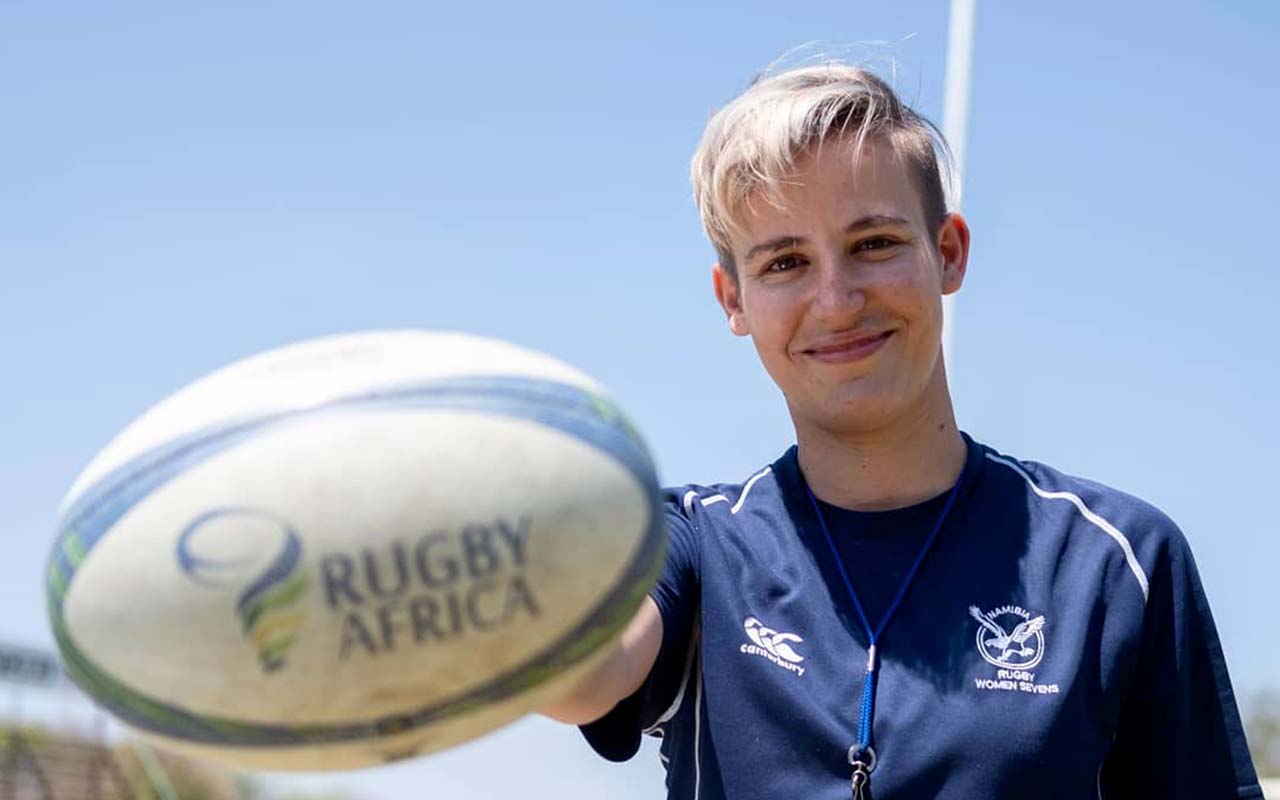 Former Namibian national women’s rugby team Vice-Captain, Christel Kotze, is on a mission to put her country on the map after her announcement as coach of the 15s and 7s teams.

The 28-year-old, who hails from Windhoek, represented the women’s national team from 2014-2016, and formed part of the first national women’s sevens team in 2014, which she regards as her career highlight.

Now as coach, her career goals are to obtain her level 3 Certificate in 15s rugby coaching and to get the Namibian ladies’ team to become rightful competitors on the African continent.

Christel, thank you for chatting to us. Please tell us more about yourself.

I’m Christel Kotze born and raised in Windhoek, Namibia. I schooled at Delta Secondary School and studying at New Media at the College of the Arts. I played Netball at primary school level, football in high school, and joined rugby only after school in 2013 and played as flyhalf and wing.

I grew up in a house where both my parents loved sport, my father in particular played rugby – both club and national level when I was growing up so the love for rugby came from him.

You have represented the national team from 2014-2016. Please tell us about that experience and being the Vice-Captain.

There is no greater honour than representing your country. At the time, we were a new team on the block and didn’t have it easy but with each passing game, we grew. Traveling to different countries and making lifelong friendships on and off the field was amazing. I am still in contact with a lot of them. Being Vice-Captain of the team was a highlight in my career.

You hold a World Rugby level 2 sevens coaching certificate. Why is it important to get knowledge of coaching?

Apart from having experience on the field as a player, acquiring the knowledge on how to coach is important to be able to coach the game to the players, to develop each player to their full potential. For coaches to be effective they must understand and be able to explain the rules of the game. The better the coach can explain the technical aspects of the game and how players can keep within the rules, the better.

You were recently appointed as the new senior women’s national coach and women’s 7’s coach. Please tell us about the appointment.

It’s been an absolute dream come true, ever since I started coaching the idea of one day being a national coach lingered in the back of my mind, but it was only in the last year where it really started to feel within reach.

What are your plans for the teams going forward?

The short-term goal for the team is to keep sharpening the skill level of the ladies and help them continue growing in confidence within the game.

And long-term, is for the teams to get to the point of being competitive in Africa. I believe and know the talent in Namibia is tremendous and the ladies just need an opportunity to show the world what they can do.

Since Rugby Africa has introduced a new competition for the women’s game in Africa (15’s rugby), like the men’s composition, called the Rugby Africa Women’s Cup, where countries from across Africa compete for the title. This would be the biggest target to get Namibia to be a part of such a tournament, as it would be their first.

Lastly on the sevens, the aim is to get the team back onto the African circuit.

What are other highlights of your career in the sport?

One highlight is forming part of the first National women’s sevens team in 2014. Another one is in 2015, I was the first player to put points on the board for Namibia scoring a try and converting it at the Women’s CAR 7’s Tournament that was hosted in SA.

Having the honour of rebuilding and coaching the Windhoek High School and Wanderers Women’s rugby. It was such an amazing experience to see the women’s game grow on all levels. The biggest one is becoming the first female to coach the national women’s team in Namibia.

As a coach, I admire Desiree Ellis, we both are former players trying to be the difference we want to see in the sport we love so much. I have absolute respect for the work she has put in with the Banyana Banyana team and I hope to further grow as a coach and lead the Namibian team to new heights as she has done and continues to do with the SA women’s soccer team.

Serena Williams is up there. Showing that you can do anything you put your mind to no matter what society says or thinks.

One of the biggest rugby players I admire is Portia Woodman from New Zealand’s Black Ferns. Just her style of play and her pure tenacity to not let any setback stop her from coming back stronger.

Apart from sports, what else are you doing?

Apart from being physically active in sport, I also work at the National broadcaster, NBC, in the sport department producing a local rugby magazine show called Absolute Rugby. I also from time to time produce news stories for the daily news bulletin.

Ultimately the objective is to get my level 3 certificate in 15’s rugby. And to get the Namibian ladies to become rightful competitors on the African continent.

What do you think of gsport and its impact on the growth of women’s sports?

I think media, in general, should keep pushing the voice of the women’s game in all sport codes. Make it headline news, steering the general conversation into the women’s direction, just as with the men.

Photo 1 Caption: Former national vice-captain Christel Kotze is on a mission to put Namibia on the women’s rugby map following her announcement as the first female coach of the country’s 15s and 7s teams. Photo: Christel Kotze (Instagram)