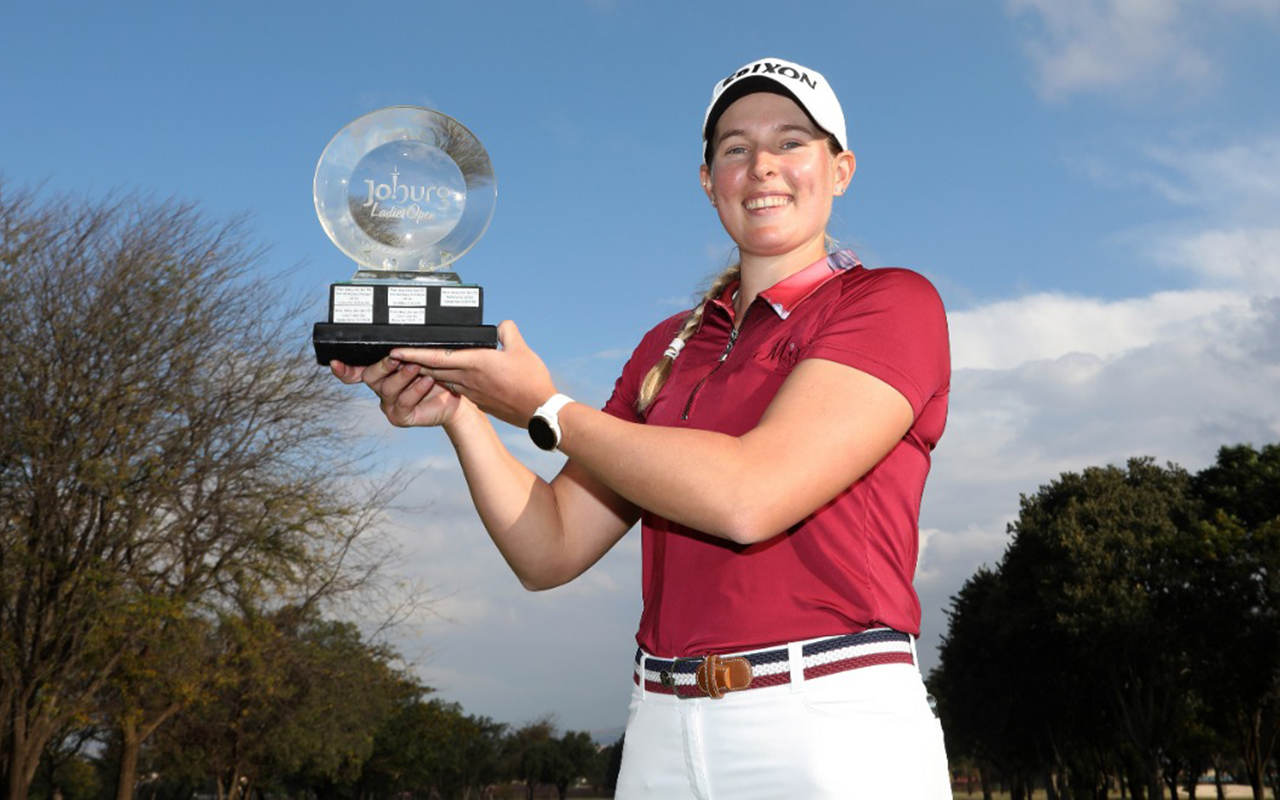 Casandra Hall sealed a hard-fought for Sunshine Ladies Tour victory when she prevailed in an epic tussle with Lee-Anne Pace, to win the Joburg Ladies Open by one shot at Soweto Country Club on Friday, 30 April 2021.

“I am absolutely delighted,” said the smiling 21-year-old. “I won twice on the Vodacom Origins of Golf Series and the Investec Royal Swazi Ladies Open at Sun City, but all of those were against a handful of players. This feels like a maiden win; beating a full field is an incredible feeling.”

The Glendower golfer was paired with the Tour’s most prolific winner Pace, who held a two-shot overnight lead and was targeting a 14th title on Africa’s premier women’s professional circuit.

“We arrived in the rain to find a water-logged course and we didn’t think we’d play. Hats off the green staff and the Sunshine Ladies Tour officials, who worked so hard to make it happen. Play was delayed by two and a halfhours, but finally we got going,” explained the 2021 champion.

“The course played a lot different to the first two days. The fairways were softer and not running as much and the greens were sitting. I actually got frustrated because now that you could target the pins, I wasn’t hittingfairways and didn’t have shots into the greens.

“We both had a couple of dropped shots, but I just kept pushing on and tried my best to stay patient.”

Hall dropped on the first hole, Pace on the second. When Pace bogeyed the fourth, Hall’s brace of birdies on the third and fourth holes handed her the lead for the first time, but she lost the advantage when she incurred apenalty at the par four fifth.

“I was in bunker and I hit out. I thought I was in the fairway, so I marked and picked up the ball, but my playing partner Maiken (Bing Paulsen) came over and she didn’t think it was in the fairway. We called a rules officialand unfortunately I got a one-shot penalty. I was already making bogey already, and ended up with a double.”

The gap shrunk again when Pace dropped on the sixth, but Hall bogeyed the eighth. “When we walked past the leaderboard, I realised I was only one shot behind,” Hall said. “I knew I’d have to knuckle down and chase hard.”

“That putt on 18 was nerve-wracking, but I made it to come away with a W.” – Joburg Ladies Open winner, Casandra Hall

“Lee-Anne made five straight pars, but I birdied the par-5 (13th) to draw level. I dropped again on 14, but then she dropped on the next hole and we were level again. The last four holes were tense. That putt on 18 wasnerve-wracking, but I made it to come away with a W.”

Hall got into the Saudi Ladies International on the Ladies European Tour late last year, where she holed the winning putt for the International Team in the Team Competition. She came home inspired and more determined to make this season of the Sunshine Ladies Tour count.

“I worked really hard on my game, with my mental coach and in the gym. You can’t put all that effort in without reward, so I stayed positive and patient,” said Hall. “It’s a great feeling to get this win with the Dimension Data Ladies Challenge and the Investec SA Women’s Open still coming up. It’s given me a lot of confidence, knowing I can beat a full field, as well.”

Hall’s R70 000 pay-day also came with a healthy dose of ranking points. She moved to second in the Investec Order of Merit, while Pace’s runner-up finish pushed her to summit. She leads with 950 points and is 140 points ahead of Hall.

Paulsen placed sixth in her first start at the Gary Player Country Club last week and secured a third place finish on three-over with a closing 74 at Soweto Country Club. The Norwegian moved into the eighth spot in the rankings.

SuperSport Ladies Challenge winner Michaela Fletcher is fourth in the points standings after carding a solid 73 in the final round to take fourth place on four-over.

The Sunshine Ladies Tour next travels to the picturesque Garden Route and the eighth playing of the popular Dimension Data Ladies Challenge in George from 6-8 May. All three rounds will be contested on the Outeniqua Course at Fancourt. Prize money is R600 000, while the leading 10 pro-am teams will also contest for a R100 000 bonus prize.