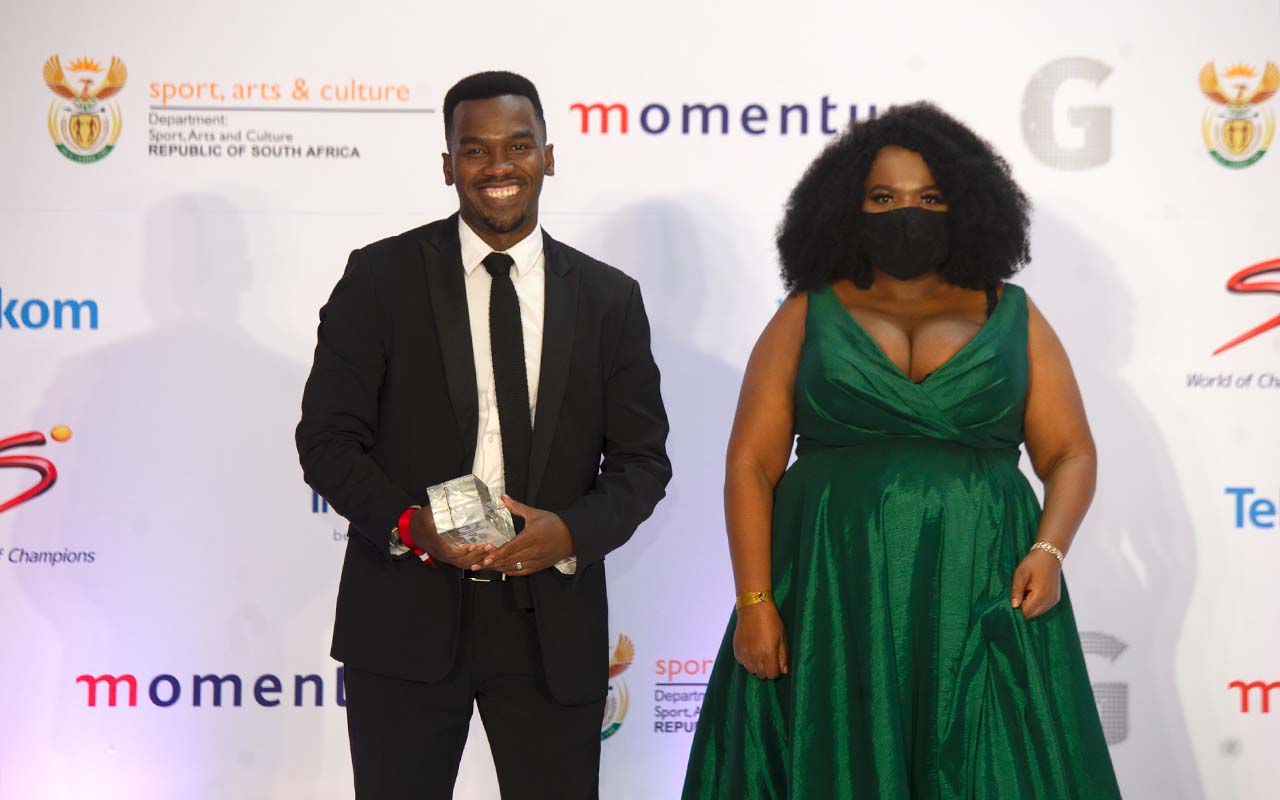 Winning the 2021 Momentum gsport Awards Volunteer of the Year accolade has opened doors for Sandile Lukhele as he plans to use his new opportunities to assist young girls further their cricket careers.

Since his recognition on the 31st of August, Lukhele has been fortunate to receive media attention, where he has used these platforms to campaign for his girls cricket team.

There has been positive reception as interest has risen to donate towards Lukhele’s team and it has also boosted his CV in the sporting fraternity.

With a Diploma in Sports, Post Graduate Certificate in Education, BEd Honours Degree, CSA Level l, CoachED Cricket Certificate (Gary Kirsten Foundation) and currently working on completing his CSA Level ll, Lukhele is looking forward to the future as he believes there is more to come.

Speaking with Nonto Nothana, Lukhele reminisces about walking the #gsport16 Red Carpet and reveals his admiration for the gsport platform.

Sandile, please tell us about winning the 2021 Momentum gsport Awards Volunteer of the Year accolade and how much this recognition means to you.

I feel very special, blessed and privileged, words cannot express the joy I have for winning this award. I still wake up at night and check on it, to see if it’s still there (laughs).

When you heard the news that you are one of the finalists, who was the first person you shared the news with and why?

My wife, Thandeka Nhlabathi-Lukhele. She has been part of my cricket journey for some time and she constantly supports me in everything. She has sacrificed a lot for me to follow my cricket dream, she constantly makes donations to some of the needy girls, and earlier this year, she made a prayer list of things she would like to see God doing in our lives before the end of this year. One of those items was quoted as, “God, I pray for a cricket breakthrough for my husband this year,” so when I got the news, she had to be the first one to know, and we were grateful to God for bringing gsport in our lives.

How will your win on the 2021 Momentum gsport Awards stage to boost your career in cricket?

I think my cricket career has just taken off. Firstly, the parents of our kids now believe that their kids are indeed talented, and they did a lot of ground work campaigning for me to get votes. Secondly, I have been doing a lot of radio interviews after winning the award and many people are interested in donating to our work. I think winning this award gives my CV a huge boost, and people are starting to notice us, I hope I score a cricket development job somewhere in the sporting fraternity since I also possess a Diploma in Sports (UJ), Post Graduate Certificate in Education (UNISA), BEd Honours Degree (UNISA), CSA Level l, CoachED Cricket Certificate (Gary Kirsten Foundation) and currently finishing my CSA Level ll, so better days are yet to come and I am really excited!

Please tell us what the experience was like for you, coming up to Johannesburg, being dressed in designer clothes to owning your success on the red carpet?

It has been an awesome experience I must say, fulfilling, you know. I enjoyed the attention I was getting from the gsport team, they constantly checked on me, ensured that I was comfortable and updated on everything. I had a lot of suits to choose from, I was spoiled for choice, receiving the best suit from one of the best designer in town was an honour and I am really grateful to Momentum and gsport for the love and for affording me such an opportunity to grace the red carpet with greats in the SA sports arena.

When did your love for cricket began, especially women’s cricket?

My love for cricket began in 2009, when I got employed as an educator at Esinqeni Primary School in Ntumbane (Pongola). Before that I had worked at a fitness company in Sandton and got retrenched, so I had to adjust from working in Sandton to being a teacher in a typical rural area. It was hard for me, I cried every day until I asked to put together a cricket team at school. From there I would spend much of my time training learners, but mostly just to occupy my mind and escape the boredom. Later on, I fell in love with it, and boy, it was fulfilling to see those young kids hitting big sixes and taking wickets when we had games!

I had only one girl that was playing in my boys team by then, she was a big hitter and most girls that saw her play got inspired to join the cricket team. Around 2015, I started a girls team and we worked hard, did provincial trials without any luck, we got our breakthrough in 2018 where a number of our players made the provincial side, by then I was already a full time girls coach.

What is your take on the current stage of women’s sport in your area?

I’d say it is taking off nicely, although we still have a lot to do to promote women in sports, a lot of gender stereotyping and lack of sports facilities hamper the development of sports in rural and township areas, but in the past few years we have seen a lot of ladies soccer, netball and women’s cricket tournaments growing immensely, so against all odds women’s sport in our rural areas is strongly making a bold statement that says, “We are here to stay.”

What role has gsport played in raising the profile of rural sport?

gsport has invaded the rural sports arena by storm! Remember, rural areas are neglected most of the time, less good news are reported from those areas, if you see a rural area making headlines or front pages, it is mostly for either gender-based violence, rape, poverty portraits or crime. gsport has discovered the most ignored side of the rural areas which is women’s sport and for a change in the news arena, you know that when gsport is covering a rural area, it is about women in sports upliftment and finding ways to showcase and develop talent for the betterment of women.

What are the challenges you still face as someone who’s more passionate with developing sport in rural areas?

Lack of facilities, gender stereotyping, poverty and lack of financial support are the major obstacles we face on daily basis. These cause us to be hundred steps behind those who are in the cities and our kids will always lack the competitive edge when they compete in provincial tournaments.

How has Covid affected your work?

It has negatively affected my work, most of our kids are unfit and do pick up body weight during these lockdown periods, which requires us to work extra hard every time the lockdown restrictions are lifted.

What advice do you have for young girl cricketers?

I would like to encourage them to hold on, even though the odds are against them. I believe the light at the end of the tunnel is starting to shine on women’s sport in general, so it is indeed time for them to rise up the cricket ladder, and OWN THEIR SUCCESS!

Photo 1 Caption: Sandile Lukhele still wakes up night just to check on wether his trophy is still there or not, he speaks boldly on how he’s going to use this recognition to boost his cricket career, and shares an advice to you girls’ cricketers. Photo: Momentum / gsport