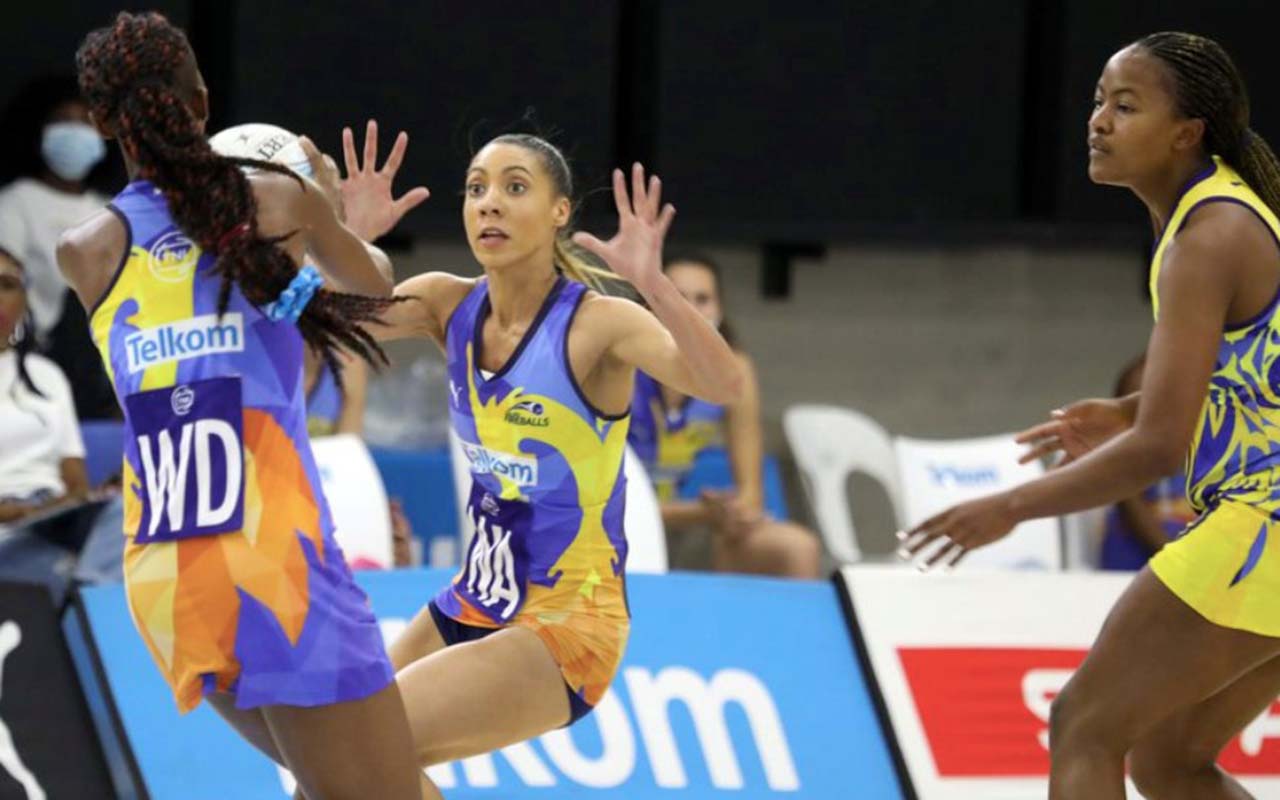 The Gauteng Jaguars are well on their way to defending their title after beating the Golden Fireballs 54-39 in the Gauteng derby on Tuesday, 7 September 2021.

The Fireballs struggled to keep up with a fast-paced Jaguars side as the shooters failed to penetrate the Jaguars defense. Even though the goal percentage was on eighty-one for both sides, the Fireballs kept losing the ball in the goal third, increasing their high error rate. Both coaches opted to stick with their starting seven in the first two quarters, but the four-time champions’ prowess carried them through, right until the end to win by fifteen goals.

This was the Fireballs’ second defeat but coach, Rozanne Matthyse believes there is still a lot to play for: “We still have a chance because nothing is impossible in this tournament. For us, we are growing as opposed to the other teams because their core group stays the same every year. You start the tournament with finding your combinations, we don’t have the luxury of just coming back from a varsity cup and having our team play for a whole week. We came out of training and having our first competition on Sunday, but it will just get better from here.”

Southern Stings went on to secure a 49-39 against Kingdom Stars. Stars settled in smoothly in the first quarter leading 11-9 but Stings coach, Annelie Lucas made two changes in the second quarter, bringing in Danelle Lochner to Goal Attack and moving Nicole Taljaard to Goal Shooter. These changes saw more movement in the Stings’ shooting circle resulting in a 24-18 lead. The Western Cape team were unstoppable in the last two quarters, making use of their center passes and making it hard for the Stars to play catch up.

The Limpopo Baobabs team beat Eastern Cape Aloes 43-40 in a nail-biting encounter. Only one goal separated the two sides in the first quarter but the Baobabs’ defensive unit of Nthabiseng Mothutsi, Theoner Mthombeni and Nanique Stevens restricted the Aloes to trail behind by five and two goals in the second and third quarter respectively. Aloes applied the same fighting spirit they had in their first game earlier today in the last quarter but still fell short by three goals.

Eastern Cape Aloes and Western Cape Tornados were head-to-head in the first three scintillating quarters refusing to back down, but it was the Aloes who finally broke away and won the game 42-36.

Aloes Goal Keeper, Bongise Wete and Goal Defence, Noluthando Maliehe discomposed the Tornados shooting combination of Anne Diedericks and Melanie Von Gunten in the final quarter, forcing them to create those errors and give away the ball. Sameshia Esau’s team are yet to taste defeat in the competition so far and will be up against the Limpopo Baobabs in the final game later this afternoon.

This was the Tornados first defeat after three matches and coach Danlee Matthews conceded that her players lacked tactic: “We were a bit inconsistent at the end and I think the girls were intimidated by the physicality. There were some newbies on court today, they haven’t had the opportunity to play but it was a bomb shock for some of them. When you play at this level you need to adapt quicker’.”

Meanwhile, the Crinums’ shooting partnership between Claudia van der Berg and Xandri Fourie earned the Free State side a 54-38 win against the Flames. Van der Berg boasted a 100% shooting average at half time and walked away with the player of the match accolade.

“It’s one of the most important things for a coach if shooters can step up. It’s all about the ball going in the ring and we are very blessed to have five brilliant shooters in the team,” Crinums coach, Burta de Kock added after the game.

Mpumalanga Sunbirds finally found that elusive win in a hard-fought battle against the Eastern Cape Comets after beating them 42-37. This was the Comets first defeat in the competition having won their opening game against the Kingdom Queens yesterday.

Sunbirds coach, Thembisile Ngwenya was delighted because her players listened to her instructions: “I am relieved and happy at the same time because the players stuck to the game plan. We actually made a bet that we going to make less errors and more turnovers going into this game.”

Photo 1 Caption: The Gauteng Jaguars are well on their way to defending their title after beating the Golden Fireballs 54-39 in the Gauteng derby on Tuesday, 7 September 2021. Photo: Supplied