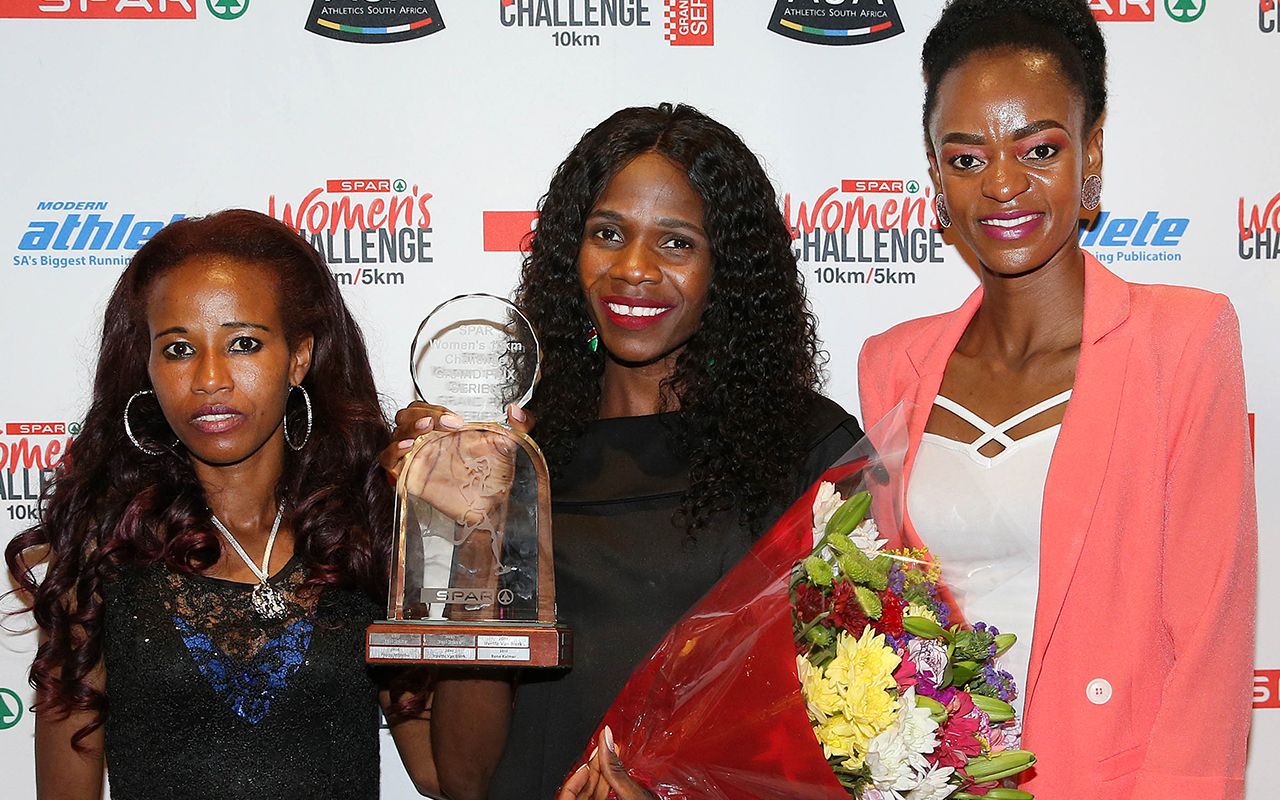 The most successful athlete in the history of the SPAR Women’s 10km Challenge Grand Prix awards, Helalia Johannes (Nedbank), pocketed a cheque for R185 000 at the SPAR Grand Prix Awards ceremony at Emperor’s Palace in Ekurhuleni on Monday.

Not only did Johannes, the 39-year-old Namibian star, win all six races in the SPAR Women’s 10km Challenge series, she did so in record time. She is the first runner to claim maximum points in the SPAR Grand Prix, finishing with a total of 180 points.

“I learnt to love the SPAR races, I was very happy to do so well in the Challenge races.” – Helalia Johannes SPAR Women’s 10km Challenge Grand Prix

Johannes also smashed her own Namibian 10km national record several times and shortly before the final race in Johannesburg, she won a bronze medal at the World Athletics championships in Doha, Qatar, finishing third in the women’s marathon.

Nare also wrapped up the junior category in stunning fashion, earning the maximum 40 points from the four races that counted for the SPAR Grand Prix.

Molotsane’s third place was proof of the value of consistency in the SPAR Grand prix. She always finished in the top eight, and earned bonus points from three of the races.

Three times SPAR Grand Prix winner, Irvette van Zyl (Nedbank), was fourth, with 120 points, despite having to miss the Tshwane race after undergoing surgery. She earned bonus points in four of the five races she ran.

SPAR Grand Prix coordinator Ian Laxton said the performance by Johannes and Nare has been outstanding.”

“What is even more important is that other runners have dramatically improved their times as they strive to keep up with Johannes. Opening the SPAR Grand Prix to international athletes has been good for the event, but it has also been brilliant for road running in South Africa. I expect even more athletes from elsewhere in Africa to start taking part and that will be good for the competition, but also very good for road running in South Africa,” said Laxton.

Johannes said she was honoured to have won the SPAR Grand Prix title.

“When I ran my first SPAR Challenge race, I was just trying to improve my speed for marathons, but I learnt to love the SPAR races. Although my focus was on marathons, I was very happy to do so well in the Challenge races,” said Johannes.

“We are very proud of what the runners have achieved.” – SPAR Marketing Director Mike Prentice

“This year, a record number of elite athletes earned bonus points for beating last year’s winning time and that can only be good for road running in South Africa.

“But what is more important is that thousands of women have taken to the streets right across South Africa. We are committed to our SPAR family and we believe that helping so many thousands of women to live an active life is good for the country as a whole.”

With four of the top ten SPAR Grand prix finishers coming from the Nedbank stable, Nedbank cleaned up in the team event, finishing with 762 points, well ahead of their nearest rival, Murray & Roberts, who finished with 288 – 17 points ahead of Boxer, who finished third.

The Grande Dame of South African road running, Sonya Laxton, achieved a major milestone at the Joburg race last month when she completed her 100th SPAR Women’s race and SPAR marked her achievement at the awards ceremony when they presented her designated charity, the Goldilocks Foundation, with a cheque for R50 000 on her behalf.

The Goldilocks Foundation is a non-profit organisation which helps children with Attention Deficit/Hyperactivity Disorder (ADHD) and other mental disabilities. It is a cause close to Sonya’s heart. Her daughter Kim Walker is a psychiatrist who is well aware of the shortage of help for children with mental illnesses.

“I am so happy to be able to contribute something to the Goldilocks Foundation,” said Sonya. “It does invaluable work with needy children.”