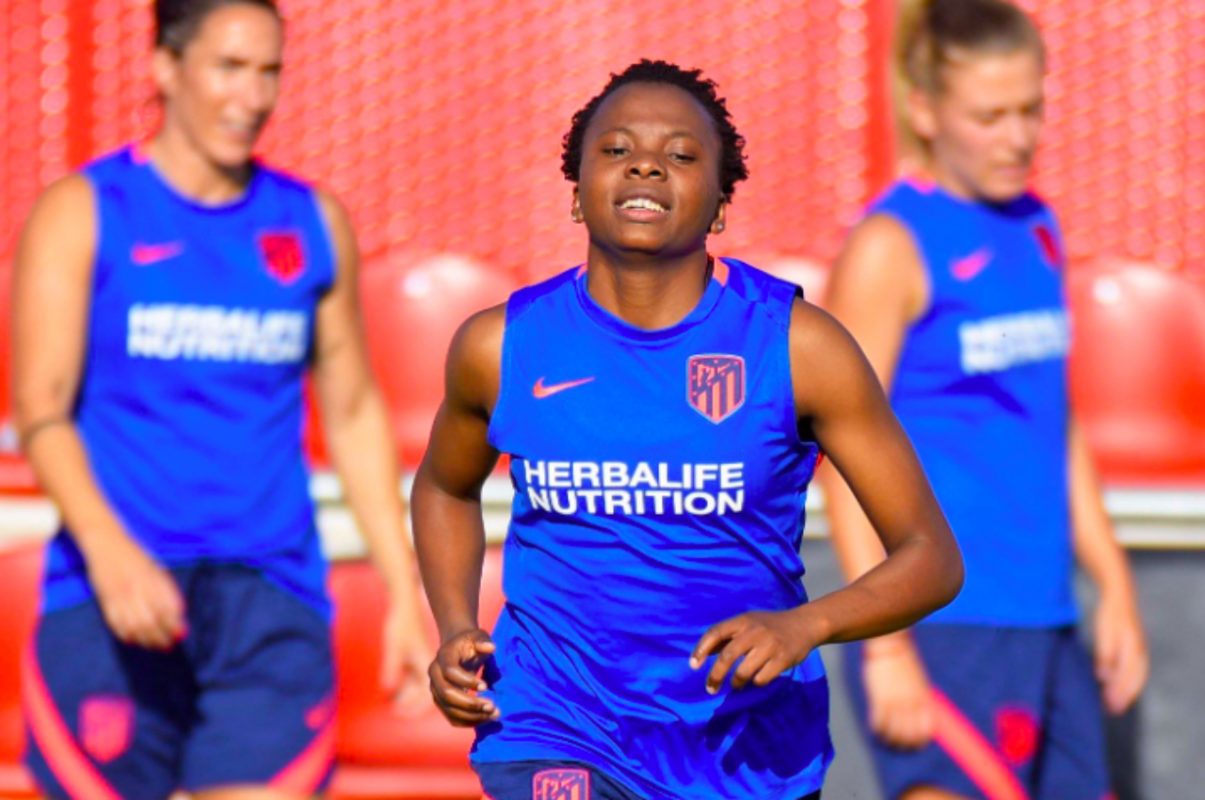 A trio of South African global stars will battle it out for the Sasol Global Woman in Sport award as they vie for top honours at the 2021 Momentum gsport Awards.

Banyana Banyana and Atletico Madrid star, Thembi Kgatlana, Wimbledon history maker, Kgothatso Montjane and Olympian and eSports World Champion, Ashleigh Moolman-Pasio, have made the shortlist after shattering barriers in the past year.

Kgatlana, one of South Africa’s most accomplished female footballers, and a former Momentum Athlete of the Year winner, continues to shine as she rises on the global stage. In 2020, she moved from Lisbon based S.L Benfica to SD Eibar where she scored 10 goals in 20 appearances. One of her biggest and proudest career milestones came in July this year when she concluded a two-year deal with Atletico Madrid.

“The news of me being a finalist for the Sasol Global Woman in Sport award came at such a perfect time. There are so many great things happening in my career right now and this is certainly a cherry on top. Being celebrated by gsport means I am being celebrated by women in sport who admire my work and talent, there is no bigger accolade than that.

“It feels so good for my work to be recognized by fellow women in sport and this keeps me so motivated to do my best every single day, both as an individual and an athlete. I have signed with one of the biggest clubs in the whole world, my book “Strike a Rock” is published and to be honest with you, I am living a dream,” said the ever so humble Kgatlana.

Kgatlana also applauded Sasol and the Momentum gsport Awards for their commendable work: “Sasol has always supported female athletes, especially footballers. We have really done our best in the field knowing that brands like Sasol will always have us covered with the rest of the off field support we need. They know and understand how important it is to empower and support women because it brings results and growth.

Double finalist at the 16th annual Momentum gsport awards, Kgothatso Montjane, who is also a finalist in the Brand SA Para Sport Star category, wrote her name in wheelchair tennis history when she became the first black South African female to reach a singles and doubles final at Wimbledon. The Limpopo-born earned runners-up medals in both categories at the prestigious tournament in London.

This is what she had to say about being a double #gsport16 finalist: “I am really honored to not only be a finalist in one category but two, I don’t even know how to best express myself, I am too excited. These are the best awards for sportswomen in the country and to be nominated again means everything to me. Winning at the Momentum gsport Awards has really helped me elevate my game, it has inspired me to do better and be an inspiration.

“I am so proud that I am able to represent my country at international events like Wimbledon and the Paralympics. The past year has been so challenging with Covid-19 and many sporting tournaments being cancelled but I am happy to have had a chance this year to play at the biggest courts and raise the South African flag high.”

Three-time Olympian and eSports World Champion, Ashleigh Moolman-Pasio rounds up the finalists for the Sasol Global Woman in Sport award. Moolman-Pasio is one of the proudest advocates for women in sport. As a Top 10 Olympian, African Road Cycling Champion & South African Road Cycling Champion, she always finds time to prioritize her advocacy work to ensure inclusion for women in sport. In December 2020, she won the first edition of the UCI Cycling eSports World Championships, organized on the online cycling platform, Zwift. Amongst many wins that she recorded this year. She also won the queen stage at the Giro Donne.

We spoke to Moolman-Pasio and this is what she had to say: “A big thank you for the nomination for the Global Woman in Sport award, I am a purpose driven athlete and to receive this kind of recognition really speaks to my heart. My motivation to keep pushing harder and to keep doing what I’m doing is to have a positive influence in the world. This kind of recognition is way more meaningful to me than any trophy or medal that I have ever received. A big thank you to Sasol for getting behind this award, as a chemical engineering graduate myself its really amazing to see a chemical company of that magnitude get behind women in sport, especially with their type of influence.

“I really do believe that having big companies like Sasol and other sponsors with their influence and credibility really bring a lot of value to women sport and help to push it forward. I would like to send a huge shout out to The Momentum gsport awards, Kass and her team for the work they have done over the years and to help elevate women in sport in this way and to Momentum whom I have a very fond relationship with, they got behind me from the beginning of my career and I wouldn’t be where I am without their support.”

The Sasol Global Woman in Sport award was introduced last year to to honour a woman, who is impacting sport globally, and going the extra mile to put women‘s sport on the map internationally. This award was won by global netball star, Karla Pretorius in 2020 following her breathtaking performances at the 2019 Netball World Cup where she emerged as the Player of the Tournament.

← The Battle is on for Imperial African Woman in Sport Finalists! How You Could Win the Public Choice Award! →