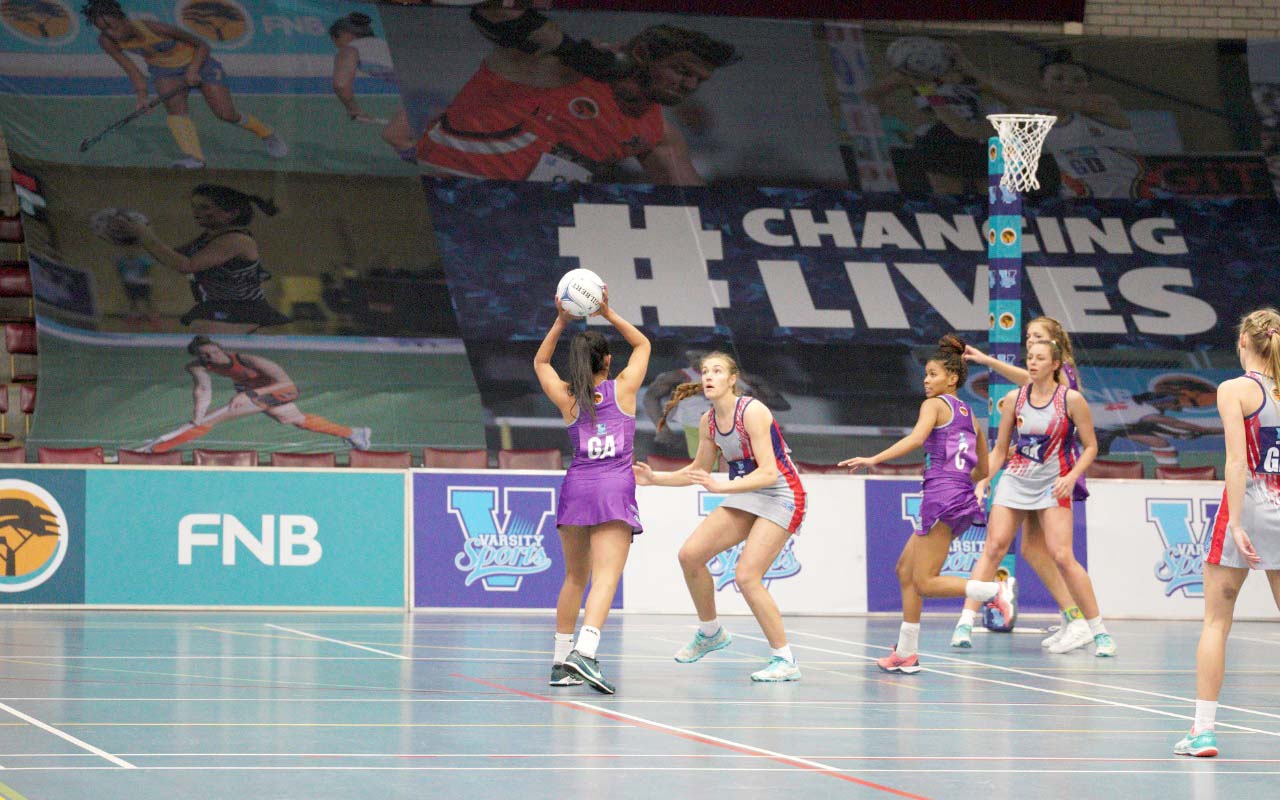 Kovsies beat North West University (NWU) 76-52, while Maties remain undefeated after their 71-49 victory over University of Pretoria (Tuks), who finished Round 6 in fifth place on the log.

However, the defending champions are expected to beat University of the Western Cape (UWC) in their final round-robin match on Saturday, with fourth-placed University of Johannesburg (UJ) having to beat Maties to reach the semi-finals.

On what was the coldest day of the week, with the mountains around Stellenbosch dusted with snow, Kovsies finally got going against NWU after a slow start to the tournament. They had a narrow three-point lead after the first quarter (18-15) but stretched it to 38-28 at half-time and 57-41 after the third quarter.

It was a much more clinical performance from Kovsies, especially in their play on the edge of the goal circle and feeding to the team’s shooters. At the other end of the court, defenders Jana Scholtz and Ané Retief made NWU pay for their long overhead passes with countless intercepts. For her stellar performance, Retief was named as the FNB Player of the Match.

Kovsies’ experience and mental toughness came through when it mattered the most. Burta de Kock’s charges once again showed it doesn’t matter how you start, it is how you finish.

For NWU, it is back to the drawing board after their surprise victory over Tuks on day one. The attacking unit needs to work on securing good ball for shooter Elmeré van der Berg, who had to contend with high looping passes on Friday.

Maties went into their match against Tuks as slight favourites, despite having lost to their rivals in the 2019 final and only beaten them once since the inception of Varsity Netball in 2013. The Stellenbosch team has also never been crowned champions, while Tuks have two titles.

The tournament hosts played to their strengths, with captain Sian Moore rallying her troops and leading from the front and within the goal circle. The team’s attacking play was superb as the ball was driven through with patience, while wing attack Nerine Koopman also stamped her authority on defence. She was named FNB Player of the Match for an outstanding all-round performance.

Tuks didn’t put enough pressure on Maties’ goal circle and their own attackers didn’t seem to play into the right spaces. They also committed way too many unforced errors with poor ball placement to blame. In the end, it prevented them from getting to the 50-goal mark and a crucial bonus point.

UJ continued to surprise at this year’s tournament with a 59-46 victory over the Nelson Mandela University (Madibaz).

They have the most bonus points (seven) of all the teams and remain queens of the Power Play, with eight points collected from four goals in Friday’s two two-minute periods. The Johannesburg team was in front at the end of each quarter – 18-10 (first), 32-22 (second) and 43-31.

Muhluri Hlatshwayo’s height in the UJ goal circle continues to be a challenge for defenders. Considering this is her first year of netball, coach Bongi Msomi has done a remarkable job of moulding her into a star for the future. With captain Liza Kruger beside her on goal attack, Hlatshwayo had a great game and deservedly received the FNB Player of the Match award.

The last match of the day may have been between the two winless teams at the bottom of the log, but it produced plenty of excitement, with Tshwane University of Technology (TUT) claiming a narrow 50-49 victory.

The score was 14-14 after the first quarter and while TUT managed to sneak ahead 27-24 at half-time, UWC got it back to 37-37 after the third quarter.

Throughout the week, TUT have brought great vibes to the court, singing and dancing, and enjoying themselves. On Friday they showed they can hold their own against more fancied opponents and thoroughly deserved the win. As an added accolade, Phindile Sithole was named FNB Player of the Match.

Round 7 Fixtures on Saturday, 28 August:

Copy and photo by Asem/Engage, with editing by gsport