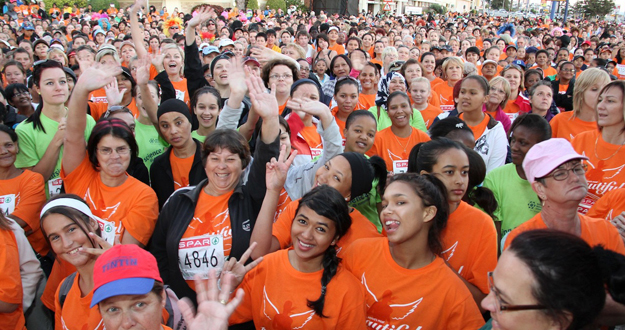 The 20th running of the SPAR Women’s Challenge in Port Elizabeth on 4 May features a new venue, Little Ladies’ race and bigger prizes, organisers announced at the launch yesterday.

Although SPAR Eastern Cape marketing manager Abri Swart remained tight-lipped about some of the details, he said the 2013 edition was shaping up to be the best yet.

“Attracting runners from across the province, it has grown exponentially over the past two decades and we always put in a 110% effort to improve and innovate year on year. We are proud to be associated with a sport that promotes healthy living, which is the focus of our brand.”

The women-only event, which was held at Kings Beach until last year, has been organised by the Walmer Athletics Club since its inception in 1993. It has grown from 287 inaugural participants to more than 12 000 last year, making it the biggest road race in the Eastern Cape.

“We’ve outgrown the existing venue and will be moving to Pollok Beach,” said Swart. He said further details on the new venue could be expected shortly.

Aside from the 5km and 10km distances, he said this year’s event would see the introduction of the 2km Little Ladies’ Race. Aimed at girls under the age of nine, it takes place on the first day of official registration on May 1.

Swart said the retailer’s recipe for success was to provide a quality event for both amateur and professional athletes. “The first 12 000 entrants will get t-shirts and goodie bags and all finishers receive commemorative medals.”

He said live entertainment and lucky draw prizes would again form an integral part of the supermarket chain’s wholesome race-day offering. Swart said the race would also benefit the wider community as all proceeds would go to a reputable charity. “We also sponsor development teams’ participation.”

The PE event is part of a five-race national Grand Prix series in which the country’s top female athletes compete for points, prize money and overall honours.

Last year, Olympic marathon runner René Kalmer won the local race en route to her third series title, which ultimately saw her drive away in the grand prize of a Nissan Micra.

Enter at www.spar.co.za or collect a form from any SUPERSPAR, SPAR or KWIKSPAR.