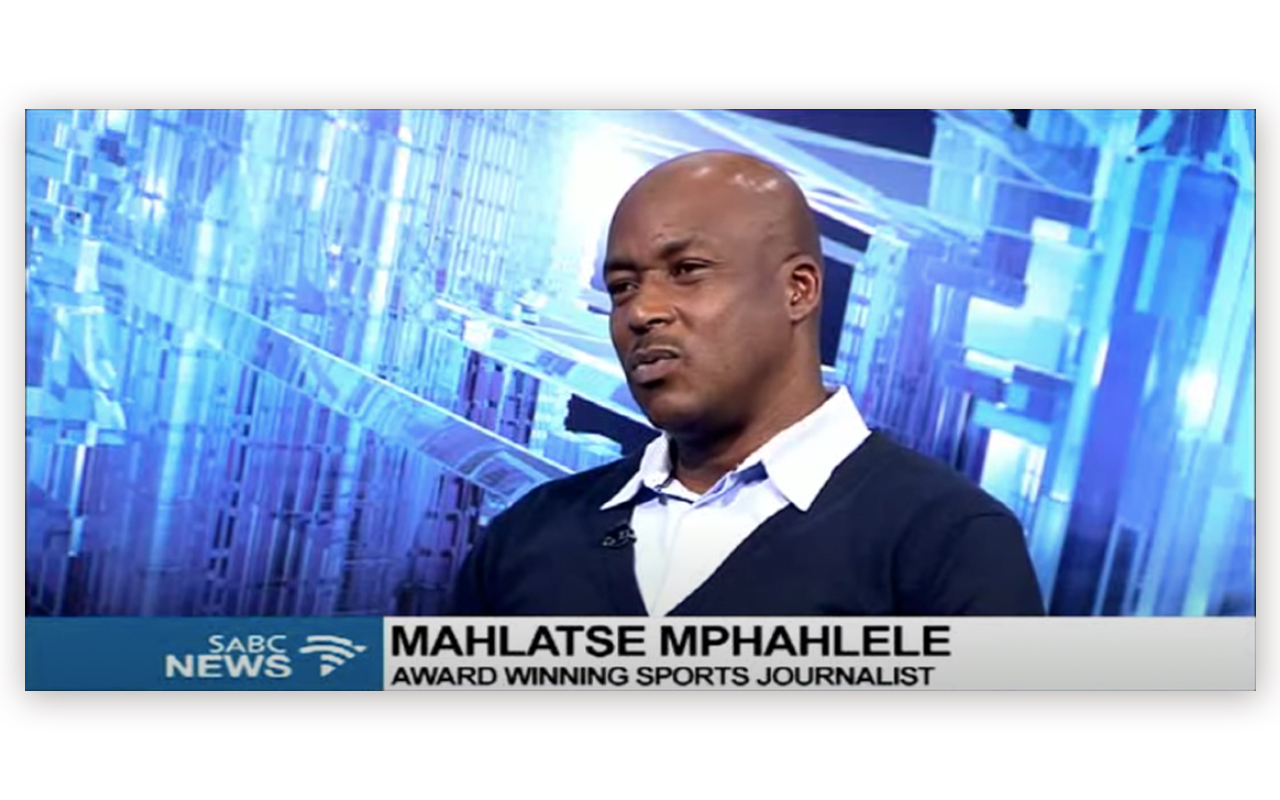 Journalism runs in the blood of award-winning Sports Reporter, Mahlatse Mphahlele, who is committed to using his extensive knowledge and experience to shine the spotlight on deserving South African sportswomen.

In 2000, when Mphahlele walked through the doors of Pretoria News as intern, he knew instantly that he wanted to dig deep and reveal the gems that were hidden in communities.

His first appointment as the newsroom’s school sport journalist allowed him to engage with the country’s future stars while learning from senior reporters who took him under their wings.

In 2007, Mphahlele took a turn and shifted his focus as he was appointed the now renamed DSTV Premiership’s Mamelodi Sundowns’ Media and Communications Manager.

He then had significant communications stints as Media Officer for the 2009 FIFA Confederation Cup, 2010 FIFA World Cup, and 2013 CAF Africa Cup of Nations.

Despite his success as Media Officer, Mphahlele’s passion for writing lured him back into the journalism field where he currently reports for TimesLive.

Speaking with Celine Abrahams, Mphahlele chats about leading the way to champion women’s sport and reveals highlights of his career so far.

Mahlatse, thank you for chatting to gsport! As you are aware that gsport is an all-women’s sport initiative, how do you feel about us recognizing the men who are playing a vital part in the development of the women’s side of the game?

It is heartwarming, but I think as men we can do much more to promote women’s sport. Over the years in my career, I have always covered women’s sports activities like netball, cricket, rugby and hockey, because I believe that they have potential.

Netball is the biggest women’s sport in the world, but it is not on the same level as men’s football for example. As men we have to do more to promote sports like netball, cricket, rugby and hockey that are played and enjoyed by women.

Where does your passion for sport and journalism stem from?

I grew up loving sport. I remember when I was still in primary school, I used to listen to football commentary on the radio because we did not have a TV at home, and I also used to read newspapers that my uncle brought home from work.

“Obviously in those days in the villages we were not really exposed to sports like cricket and rugby, so my interests were mainly on football, boxing and athletics.” – Award-winning Sports Journalist, Mahlatse Mphahlele

Obviously in those days in the villages we were not really exposed to sports like cricket and rugby, so my interests were mainly on football, boxing and athletics.

Growing up, was it your plan to get involved in sports journalism at a later stage?

Because of lack of proper career guidance at high school, I didn’t really know that you can make a career and a living out of being a sports journalist. It was only when I was in Matric when one of my English teachers encouraged me to consider it, because I was reasonably good in narration and writing essays. I started asking questions, and I went on to study Media Studies.

What is it about sport that captivates you?

In any sport, it is not over until it’s over but millions of people keep on going back for more because it is exhilarating and highly entertaining. Before I started working as a journalist, I was a fan and I used to go out to stadiums with friends to support the teams that I liked, and the disappointment of losing was unbearable. Now I have to be impartial, because of the nature of my job which requires me to be balanced, but it is difficult when it comes to national teams.

Please tell us about your journey and where it all began for you.

Well, I started at Pretoria News as an intern in 2000 where I covered school sport and I did that job for a long time without being paid. I enjoyed being in the newsroom to interact and learn from senior journalists, like the late Edgar Dassie, Brendon Nel, Timothy Sibanda and my first editor, the late Lester Mills.

I went through all the stages of development as a journalist, and I have also worked for the Sunday Times.

“I returned to journalism in 2014 and now I am a sports reporter at TimesLive (Arena Holdings).” – Mphahlele speaks on leaving journalism in 2007 to focus on Media and Communications and returning to writing in 2014.

I left journalism in 2007 to become Media and Communications Manager at Mamelodi Sundowns and I left in 2009 to become a Media Officer for the 2009 Fifa Confederation Cup, 2010 Fifa World Cup, and 2013 Caf Cup of Nations. I returned to journalism in 2014 and now I am a sports reporter at TimesLive (Arena Holdings).

When you started in the sport industry, what was the state of women’s sport coverage like?

To be honest, it was almost non-existent. At school sport level, there were girls who were involved in netball, hockey and athletics, but not much involved in the so-called major sports like football, rugby and cricket. At senior level, there was nothing much happening in terms of laying the platform and giving women fair opportunities to pursue careers as sportswomen.

How has it changed over the years?

It is actually embarrassing that after all these years there are no professional netball, rugby, football, cricket and hockey leagues in South Africa. So, to answer your question, nothing much has changed, and that is a bad indictment on sport leadership in this country.

The last FIFA Women’s World Cup in France proved beyond reasonable doubt that there is huge appetite for women’s football, but here in South Africa we are lagging behind.

In less than three years we are hosting the Netball World Cup, but we don’t have a professional league, surely that can’t be correct.

How are you playing your part to encourage more mainstream media coverage on women’s sport?

Over the past few years I have closely followed netball, and in November I was covering the National Netball Championships in Bela-Bela. I also follow women’s football, cricket and rugby, but meaningful change will come the day all the media organisations start seeing value in sending reporters on assignments to cover women’s sport, no matter how small or big the event is.

Why is it that in this modern era there is still this battle for women in sport to get the recognition that they deserve?

Media organisations don’t see much value in covering most women sport activities. You will find that journalists want to go to events, but companies are not interested because those activities don’t pull numbers. The question is how will some of these women sports activities pull numbers and even sponsors, if mainstream media doesn’t want to cover them.

What would you say to encourage more media houses to cover women’s sport?

“We simply need a mindset change because women sport is here to stay and it is growing.” – Mphahlele reveals women’s sport is on the rise.

We simply need a mindset change because women sport is here to stay and it is growing. If women sports events are covered properly, women will definitely be interested to read about their sports and men will ultimately take interest.

What are your highlights of your career so far?

I don’t put too much emphasis on those things. What I can say is that I thoroughly enjoyed my days as a school sport reporter, because those were experiences that taught me a lot about the mastering the basics.

At that level, not many people were watching my work but I gave every story my very best because of the passion that had for the job. At school sports level I also learned other sports like cricket and rugby, which I was never exposed to from a young age, because of being disadvantaged.

Who are some of your favourite women in sport stars and why?

There are many but I’ll go with Caster Semenya because of her brilliance and resilience on the face of the challenges that she has encountered in her professional life.

I also have a lot of respect for Portia Modise who has achieved so much in women’s football, but she doesn’t have much to show for it because South African football doesn’t want to reward women footballers like their male counterparts.

What keeps you motivated and inspired?

Journalism is about going out there and gathering news, and that’s what I wanted to do from day one when I walked into the Pretoria News building at Vermeulen Street, all those years ago.

Sometimes we come across stories that powerful people don’t want to see them published, but we have a responsibility to inform the public.

Our industry has evolved with technological advancements over time and I had to reinvent myself along the way to stay relevant. I guess that is the other exciting part of it now with challenges that have been brought about by social media which means that news is instant. When I started, newspapers were KING but that has changed significantly because stories can’t wait for tomorrow morning.

Everybody journalist is reporting live these days, and that is very exciting.