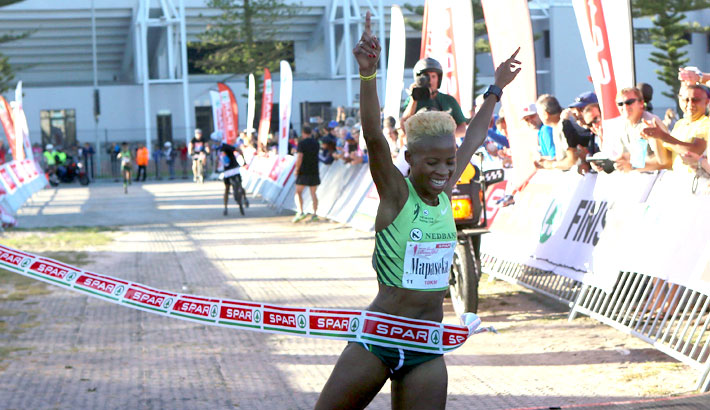 A beaming Mapaseka Makhanya danced across the finish line to win the SPAR Women’s 10 km Challenge in of 32.54 minutes at Greenpoint in Cape Town on Sunday.

Her Nedbank teammate, Rutendo Nyahora was second, in 33.03, and Lebogang Phalula, (Transnet) finished third in 33.20. Makhanya and Nyahora both broke the course record of 33.06.

The Kalmer sisters, Rene and Christine, came in fourth and fifth.

It was Makhanya’s first win in Cape Town, and her first Challenge win since Pretoria in 2013, and the victory gives her a head start in the SPAR Grand Prix.

It was a fast, competitive race from the start. Nyahora took the early lead, with Phalula, Makhanya and Rene Kalmer running in a bunch close behind her.

The lead changed hands several times, as the elite runners surged and then fell back.
“Rutendo started in the front, and I decided to run with her,” said Makhanya.

“I knew it was going to be a hard race, but it was a good, flat course. I didn’t consciously decide to go for it, it just happened. I’m very happy to have won again – it has been too long since I won a Challenge race.”

Nyahora said she had decided to go hard from the start. “However, I lost focus at four kilometres and fell back a bit, but then at six kilometres I decided I had to go hard again.”

Phalula said she found it difficult to run without her twin sister Diana-Lebo, who was doing national duty at the world cross-country championships in China.

“We usually run together and encourage each other. It was strange without her. But well done to the other girls – I’ll see you in Port Elizabeth.”

Makhanya said the run had been good preparation for the Two Oceans 21km, in a week’s time. “And after that, I will be running my first international marathon, in Hanover.

“I was thinking about that marathon before the race, but Rutendo told me to put it out of my mind and concentrate on the 10km today. So I did that, and it’s thanks to her that I won.”

She said it always felt special to win a women’s race. “When you cross the finish line, you’re the first, and you’re not surrounded by men.

Rene Kalmer, who has won more Challenge races than any other runner, and has won the Grand Prix three times, said she was happy with her run and her time.

“I’m running the Vienna marathon in two weeks time, and this was excellent preparation for that.”

Van Zyl is expecting a baby in September. She said she intended to run as long as possible.

More than Twenty-three thousand runners took part in the race, which kicked off the SPAR Challenge series. The next race is in Port Elizabeth on 9 May.