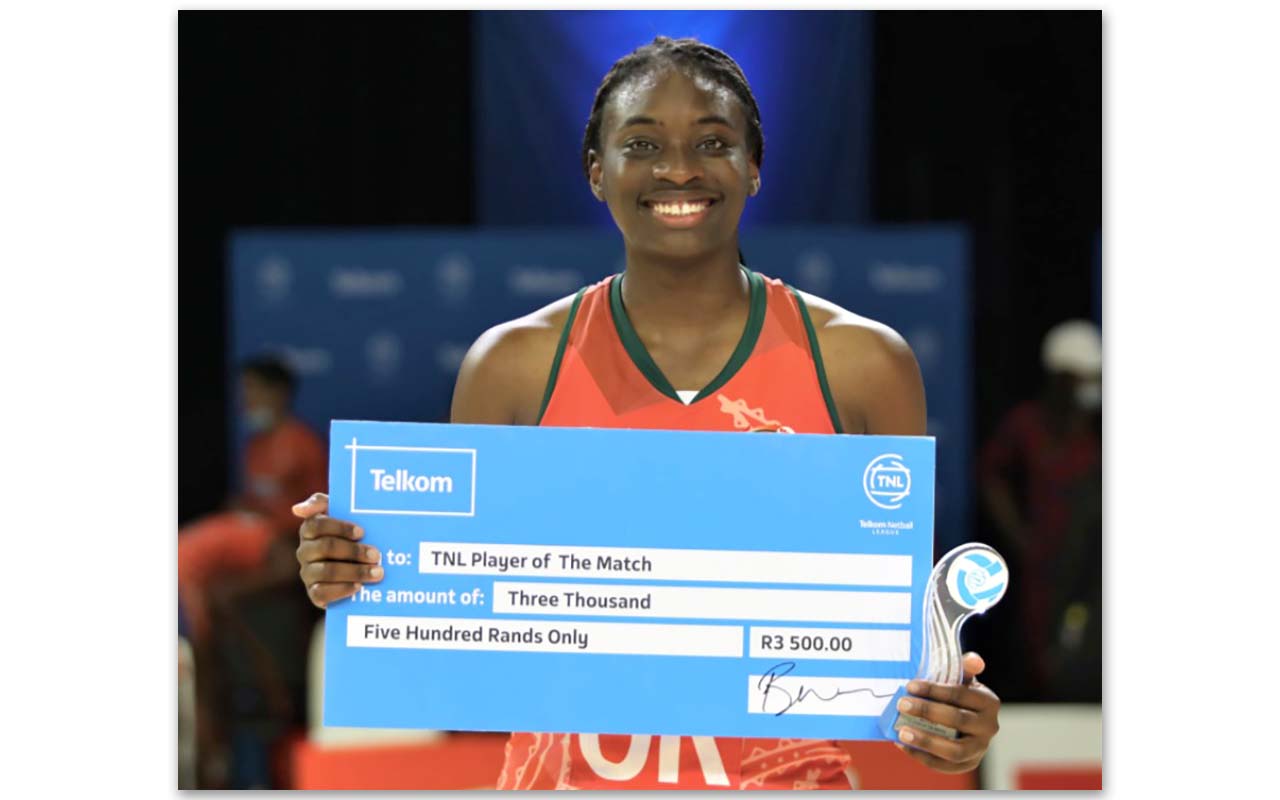 Eastern Cape Aloes and Spar Proteas goalkeeper, Pamela Chukwu, believes she is on the right track towards achieving her goal of becoming the best version of herself on the netball scene.

Chukwu was crowned Player of the Match in their final fixture of the Telkom Netball League Division Two Championships, when they beat Western Cape Tornados 42-33 and successfully defended their title, on Saturday, 16 October 2021, in Rustenburg.

However, the EC side missed out on promotion to Division One after losing 40-49 to North West Flames, in the promotion/ relegation game, on Sunday.

Despite the setback, Chukwu hailed her teammates for their efforts, but most importantly praised the almighty for giving them strength.

“We give all grace to God honestly,” Chukwu said.

“We did face some challenges in the league, we had a few games that we had lost, players were getting tired, bodies were getting sore, but we knew what we wanted at the end and we were able to accomplish it.” – Pamela Chukwu, Player of the Match in the Telkom Netball League Division Two Championships final.

Speaking about her Player of the Match accolade, she said: “I am really grateful to God, I could not have done it without his strength.

“It’s a God given talent, it’s really by his strength that I am able to be who I am and be where I am.

“I went there trusting in God, and he just saw me through.”

When asked if the team was disappointed about missing out on gaining promotion to Division One, Chukwu said her teammates gave their best performance on the day.

“I mean look, we did our best.

“In the end we knew it wasn’t going to be easy but, we were obviously happy that we had won. We wanted to give the best of us but then bodies were tired.

“We probably didn’t prepare as well as we should have for the game but, we fought hard so I am proud of my team.”

In 2020 Chukwu was part of the Spar Proteas squad that faced Malawi Queens in a three match Challenge Series.

In March this year, the player represented SA in 2021 Spar Challenge Tri Nations Series, which featured Uganda and Namibia.

When asked about her future plans Chukwu said; “For me personally, now I go back to work.

“Netball wise I am yet to find out actually, it’s very interesting.

“I would like to become the best version of myself, I’d like to be more than what I am now. I have a particular goal, definitely I can tell you I have not reached it yet but, I hoping that someday I can reach it.

Chukwu was hesitant to give more insight  on her “particular goal” when asked to do so and said: “Hmmm …. You’ll have to wait and find out.”

Photo 1 Caption: Eastern Cape Aloes and Spar Proteas goalkeeper, Pamela Chukwu, believes she is on the right track towards achieving her goal of becoming the best version of herself on the netball scene. Photo: Supplied