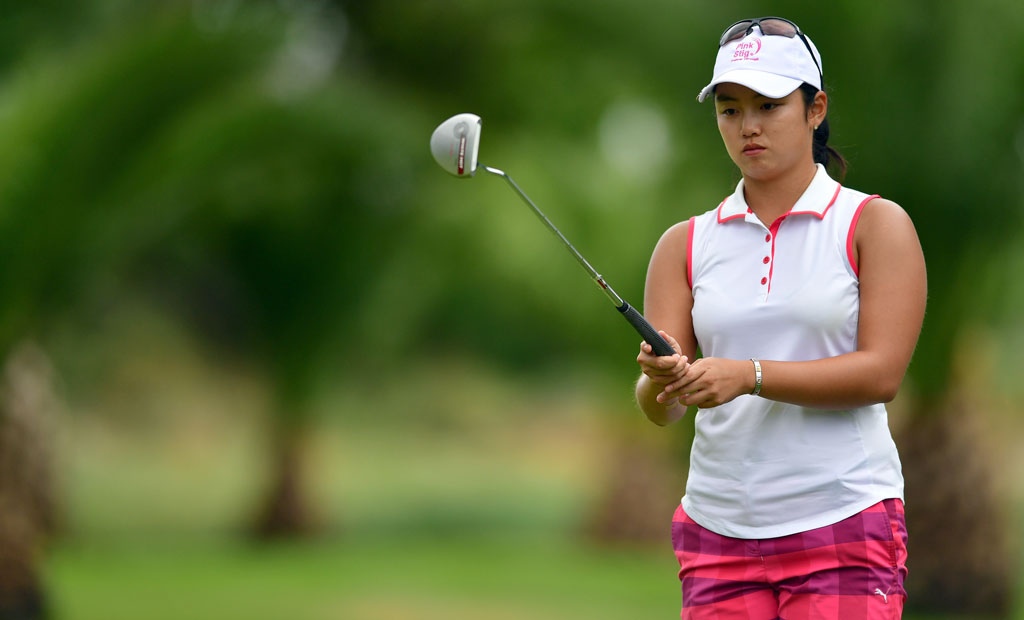 Carrie Park continues to make a name for herself as one of the hottest prospects on the Sunshine Ladies Tour.

The young South Korean fired a flawless four-under-par 68 on another testing day at Rondebosch Golf to open up a two-shot lead over former champion Ashleigh Buhai (nee Simon) in the second round of the SA Women’s Masters in Cape Town.

All eyes have been on South African number one Lee-Anne Pace in her first start in the 2017 Chase to the Investec Cup for Ladies and she did not disappoint – a second successive 70 moved South Africa’s top export to third at four under.

Nicole Garcia and England’s Kiran Matharu, who shared the first round lead with Park and Simon, slipped to a tie for fourth with a pair of 72s.

Buhai, Garcia and Matharu all surrendered shots over the first five holes, but Park made the most of the benign conditions with a string of pars before she laid down a marker with a birdie at the par three sixth.

“I hit it stiff at the short hole and tapped in the first birdie,” Park said. “The wind was better than in the first round, so you could take a few more chances. I made a 10-footer at nine for birdie and holed two more putts around 10 to 12 foot at 11 and 13.

“The greens are tricky and I am struggling a little with the pace. It helped a lot to play with Lee-Anne, because she came back strong on the back nine and that raised my game also. She is experienced and famous, so it was great to play with her because I learned a lot.”

Pace made a solid start as she aimed to shore up the gap on the first round leaders with a birdie at the first, but bogeys at four and nine kept her out of contention. The back nine was vintage Pace, though, and she made good ground with birdies at 11, 13 and 17.

“I definitely found more pace on the greens coming home and I’m in a good position for the final round,” said Pace, looking to push her winning tally on the Sunshine Ladies Tour to 10.

“It was great to have some crowds out here, especially around the 18th and I’m looking forward to playing the last round. Ashleigh is always a fierce competitor and it’s great to see Carrie holding her own, as well. We should give them a great show tomorrow.”

Buhai said the three-putt start and three-putt finish wasn’t ideal, but everything in between was solid.

“I’m feeling great out there with the new clubs, although I still have a little misfire every now and then” said Buhai, who won the SA Women’s Masters as a 14-year-old amateur. “It was a good day, despite the bogey start and finish. Hopefully I can limit the mistakes and take it to the bank tomorrow.”

Park, meanwhile, has little fear of starting the final 18 in such esteemed company.

She was just 13 when her father brought her from Seoul to Pretoria, enrolled her at the GFG Golf Academy and boarding school at Southdowns College in Centurion.

Park represented the Gauteng North Golf Union and – on her way to becoming the country’s number one ranked amateur in 2013/2014 – she was the subject of a lot  of good-hearted teasing from her peers, because she ‘goes into the zone’.

For instance, the petite 19-year-old had no idea she had won the 2013 Sanlam SA Stroke Play Championship and the second round of the R500 000 showpiece proved no different. “I’m leading,” shrieked Park with a huge after a quick look at the live scoring leaderboard.

“Oh look, I didn’t drop any shots. Very good, no bogeys and I’m leading. Wow, okay, that’s pretty cool.” Those who have followed her meteoric rise over the last five years, were not surprised.

“She began playing on the IGT Challenge Tour in 2014 and she had a bunch of top 10 finishes against the men,” said Garcia. “She even chased Anton Haig to the finish line twice. Last year she finished third at the SA Women’s Open in her Sunshine Ladies Tour debut, and she made the top 10 field for the Investec Cup for Ladies Final. She is fearless.”

Park said she feels good about her chances. “I was very solid for two days, so yeah, I am feeling good.

“This is a huge tournament to win, but I’m excited to be in the last group. I have a lot of support from my dad, Pink Stig and coach Graeme (Francis). The fans have been amazing, so I don’t think I will have too much nerves.”

Photo 1 caption: South Korean Carrie Park focusses on her game during Day 2 of the 2017 SA Women’s Masters in Cape Town, and marked the day’s end with a 2-shot lead over a packed leaderboard at the Rondebosch Golf Course on Friday. Photo: Johan Rynners