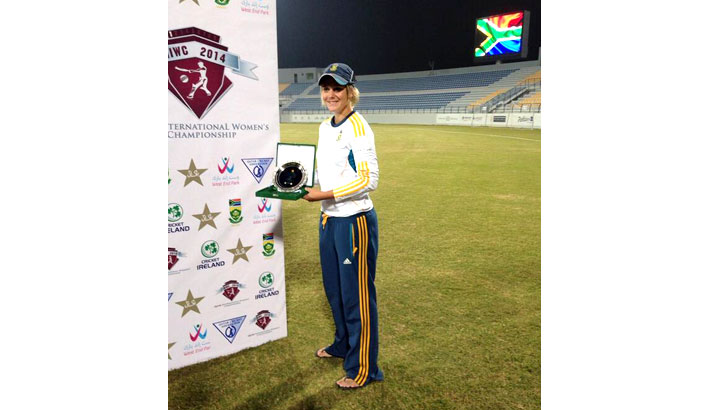 The Momentum Proteas women held their nerve to pull off a three-wicket victory over Pakistan in their second clash during the Qatar International Women’s Cricket Championship triangular series on Wednesday.

Ireland are the third competing team.

Leg-spinner Dané van Niekerk took a remarkable five wickets for 17 and Shandré Fritz scored an unbeaten 43 runs to get their side the hard-won result when wickets were tumbling in the end.

Pakistan posted a modest total of 101 before they were bowled out, thanks to Van Niekerk’s outstanding effort. Yolandi Potgieter provided good support, taking two valuable wickets for 18 runs in her six-over spell.

Bismah Maroof was once again Pakistan’s leading run scorer, this time managing 30 off 82 balls before she was caught by SA captain, Mignon du Preez, off Van Niekerk.

South Africa got off to a rocky start when they lost two wickets in the first five overs. Lizelle Lee was trapped leg before for 10 by Sumaiya Siddiqi at the end of the second over, and Trisha Chetty was caught behind for four, off Qanita Jalil, at the start of the fifth.

The batters put together some handy short-lived partnerships. Du Preez and Marizanne Kapp shared a 15-run, third-wicket partnership before the latter lost her wicket for 11.

Du Preez (13) went on to share a 22-run partnership with Fritz before she was beaten by a great delivery by Sana Mir. It was the fifth-wicket, 34-run stand of Fritz and van Niekerk (12) that gave the South African innings some impetus.

Tensions began to mount as Dar dismissed Nadine Moodley (3) and Yolandi Potgieter (0) to cap off her 3/23, but Fritz maintained her poise and with Chloe Tryon (3*), got her side safely over the finish line.

South Africa’s relieved captain is happy with the win, but noted that her side still has a few more kinks to work out before the final against Pakistan on Friday.

“It is always tough playing against Pakistan,” she said. “There’s a fair amount of competitiveness between our sides, and it was great to be able to pull off that win today.

“The team showed great character and dog fight during the tough patches, and that is the kind of commitment that will win us big matches in the near future.

“With every win, it is important to look at what we could have done better and there are a few areas where we know we need to improve on if we want to beat them (Pakistan) in the final on Friday,” Du Preez concluded.

Pakistan top the log with six points. South Africa, who lost only their first match against Pakistan, are in second place with five points. Their opening match of the tournament against Ireland was abandoned without a ball being bowled due to rain.