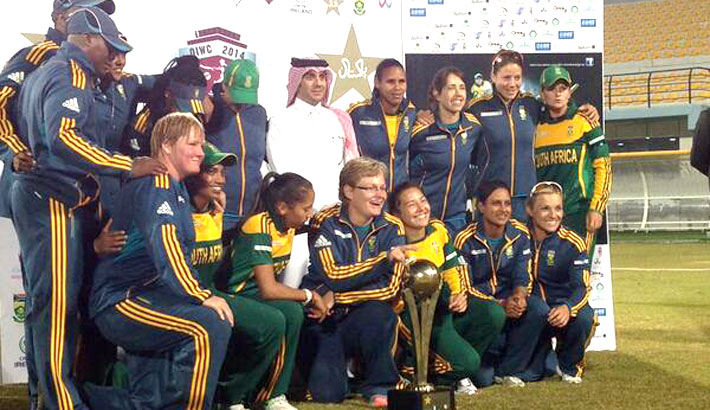 The Momentum Proteas women sealed a tough, four-wicket victory against Pakistan to win the Qatar International Women’s Cricket Challenge triangular series in Doha on Friday. Sunette Loubser produced a notable, all-round performance with both bat and ball to lead her side to a well-fought win.

Pakistan were restricted to just 94 runs in 46.3 overs after they were asked to bat first by South Africa. Javeria Khan top scored with 30 runs off 60 balls, while the rest of her teammates were confined to 14 and less by an impressive bowling attack led by Shabnim Ismail (3/25).

Moseline Daniels (2/13) and Loubser (2/19) provided her with good support, while Marizanne Kapp and Dané van Niekerk kept things tight and took a wicket each for their efforts.

Marcia Letsoalo did not pick up any wickets, but she bowled an impressive five-over spell that conceded just 10 runs including a maiden.

“I was very happy with our bowling effort today,” Loubser said. “We wanted to be clinical and with the exception of a few bad balls, we achieved our goal.

“The bowlers have really gelled well on this tour and we’ve learned a lot from our mistakes in previous matches. The key is more game time so we can iron out the creases even better before we reach the T20 World Cup in March, which is now just a few weeks away,” she finished.

South Africa once again lost two quick wickets up front when they batted. Lizelle Lee was the first to depart when she was trapped leg before for four off Asmavia Iqbal, just three balls into their innings.

Momentum SA captain Mignon du Preez receives the trophy for the inagural Qatar International Women’s Cricket Challenge, for her third series win in the sub-continent as captain. “It’s a huge accomplishment winning a series on the sub-continent,” said du Preez, “And I have to commend the girls for their hard work and commitment to our cause.” Photo: Charlie Gouveia on twitter

The captain, Mignon du Preez, also fell to a similar delivery off Sana Mir at the start of the fourth. Trisha Chetty (13) and Marizanne Kapp (15) were on their way to building a good partnership when Sumaiya Siddiqi (2/14) struck twice in the 21st over, dismissing them both.

Sunette Loubser (25*) and Shandré Fritz (19) initiated the revival of the innings with their 31-run, fifth-wicket stand. Loubser also led the 24-run partnership for the sixth wicket with Chloe Tryon (7), who lost her wicket with just two runs needed to win.

Du Preez was delighted with her side’s performance and believes that it bodes well for the T20 segment of the triangular series starting on Sunday, 19 January.

This is her third series victory in the sub-continent as captain. She previously led her side to victory against Bangladesh at home in an ODI and T20 series in October 2012. “I’m very happy and proud of the team today,” she exclaimed. “It’s a huge accomplishment winning a series on the sub-continent and I have to commend the girls for their hard work and commitment to our cause.

“We are making winning a habit in our side and we hope to bring the confidence gained this week into the T20 series starting Sunday.”

The team will now switch gears and prepare for the opening match of the T20 triangular series, once again against Pakistan.