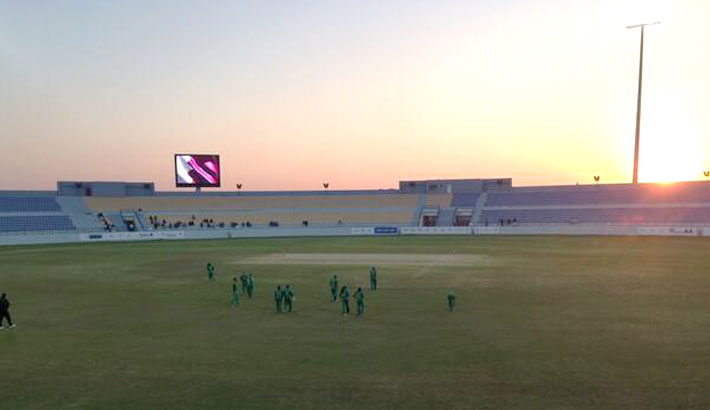 The Momentum Proteas women beat Pakistan by seven wickets to pull off a double-win in the T20 segment of the Qatar International Women’s Cricket Champions in Doha on Wednesday, simultaneously securing their place in the final, also against Pakistan, at the West End Park International Cricket Stadium on Friday.

The bowlers once again put their hands up, bundling Pakistan out for 96 in their 20 overs.

Moseline Daniels was the leader of the pack, taking three wickets for 19 in her four overs. Seventeen-year-old Suné Luus bounced back well in this match, taking 2/10 in her four overs after going for 15 off the only over she bowled against Ireland earlier in the day.

Shabnim Ismail took 2/20, while Marcia Letsoalo chipped in with a single wicket.

Proteas captain Mignon du Preez receives her Player of the Match trophy, after leading her team to their second win of the day, beating the Qatar International Cricket triangular hosts Pakistan by 7 wickets. Photo: Charlie Gouveia on twitter (@CharlieG812)

Pakistan struck early on in the South African reply, removing Trisha Chetty for one at the start of the second over. Lizelle Lee and Mignon du Preez (38) shared a 60-run partnership for the second wicket before Lee was dismissed by Sania Khan for 30.

The loss of a wicket did not slow the innings down, however. Marizanne Kapp (21*) added a 31-run, third-wicket stand with her skipper to put the side well on the path to victory before Du Preez was stumped off Sana Mir in the 12th over.

Shandré Fritz (1*) did not have much to do but keep her wicket intact as Kapp led the chase to a well-deserved victory, with five balls remaining.

“It’s been a long day, but very rewarding for our team,” SA captain, Mignon du Preez, said. “I’m so proud of the professionalism that the team displayed today. Everyone put their hand up, whether they were playing or not and everyone contributed to the success of the day.

“Lizelle (Lee), Trish (Trisha Chetty) and Kappie (Marizanne Kapp) did really well with the bat and our bowlers did a great job to set up the match for us. Moosie (Moseline Daniels), Shibby (Shabnim Ismail) and Sunétjie (Suné Luus) made sure that the wickets were constantly falling and kept the pressure up all the way to the end.

“I’m also happy to have been able to contribute with the bat and on the field. Nothing makes a captain happier than a solid team effort, and that’s what we had today,” said Du Preez.

Proteas newcomer Lizelle Lee earner the Player of the Match award for her T20 half-century, which was instrumental in placing the South African in their winning position. Photo: Charlie Gouveia on twitter (@CharlieG812)

Earlier in the day, Lee scored a speedy 53 runs off 52 balls to lead the Proteas women to their second tournament triumph in Doha on Wednesday, their first T20 of their double-header assignment of the day.

Ireland managed 101/7 in their allotted 20 overs after they were asked to bat first. The bowlers played as a unit, with Daniels, Letsoalo, Kapp, Ismail and Loubser all taking a wicket each.

South Africa made a swift reply. Lee and opening partner Chetty (27*) once again laid the foundation for a strong chase with their 83-run opening stand, before the former was dismissed by Amy Keanley at the end of the 12th over. The Irish bowlers struggled with their lines, conceding 14 runs through extras.

Chetty and skipper du Preez (8*) kept their composure, adding 19 runs to get their side to victory. Du Preez was happy with the win but was reserving any celebrations for the end of the day.

“It was a great game played by the team,” she said.

“Today we executed our game plans well and, even when things went slightly off course, we were able to bring it back really well. That’s one out of two, now we look towards Pakistan later this evening.”

South Africa will turn their focus to the T20 final on Friday at the same ground. Play starts at 17:00 local time, 16:00 South Africa time.

Main Photo Caption: The Momentum SA Proteas take to the field at the start of their second T20 International fixture in Doha on Wednesday, 22 January, 2014. The Proteas started off the day by beating Ireland by 9 wicket, before beating tournament hosts Pakistan by 7 wickets, to qualify for Friday’s final, at the top of the group-stage log. Photo: Charlie Gouveia on twitter (@CharlieG812)