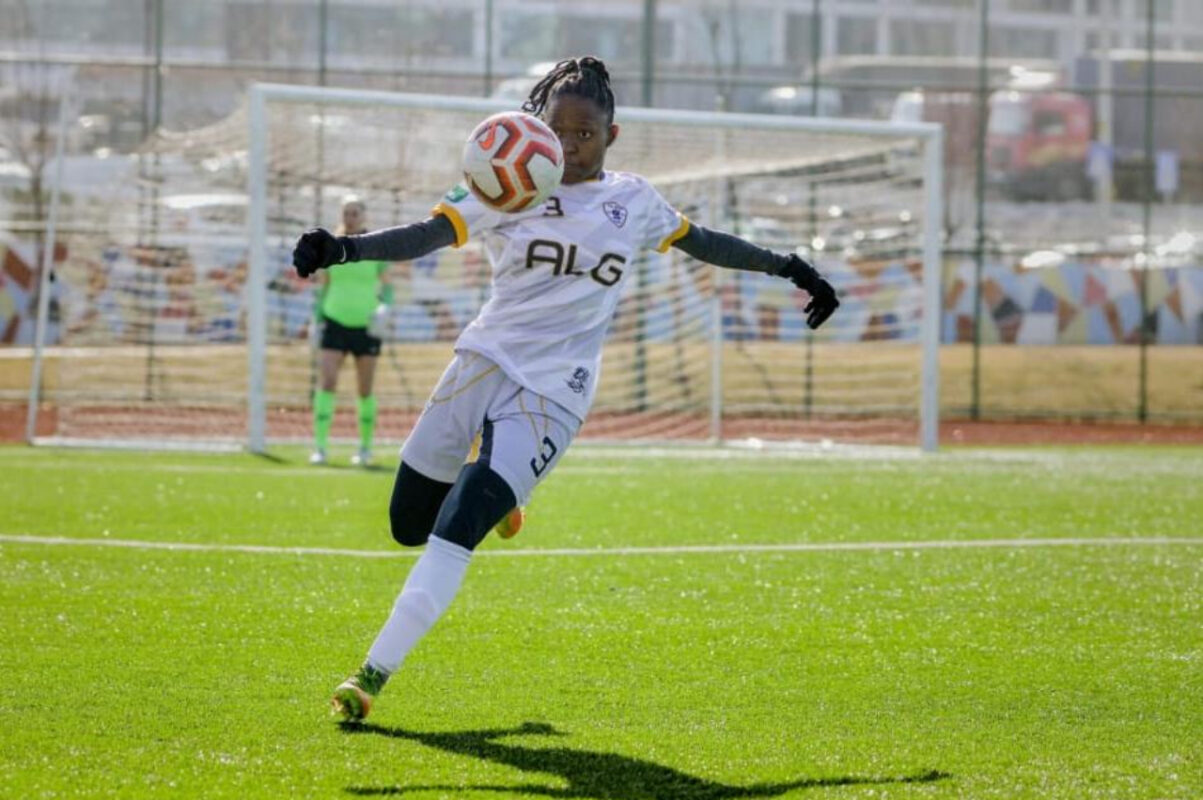 South African footballer Rachel Sebati is counting her blessings as her star continues to rise on the international stage.

The TUT product showed versatility throughout the season as she was converted from her natural position as central midfielder to left fullback.

The 27-year-old is relishing every moment playing in Europe and having the opportunity to rub shoulders with the world’s best in the UEFA Women’s Champions League.

gsport caught up with the high-flying Sebati.

Rachel, it is great to chat with you. How does it feel being a league champion?

It feels great! It’s an honour and a privilege to be part of a team that made history, something I will forever be grateful to God for.

How would you sum up your first season with the club and your undeniable contributions?

It has been an awesome season. It was not an easy season; we had our ups and downs but thank God the ups were always in dominance. We were blessed with such an awesome team that made our stay in Turkey magnificent. Our teammates were so bubbly, loving and caring. We also feel that in general the Turkey nation is filled with warm hearts. One will never go hungry nor thirsty whilst there. It was a fascinating experience. Our team was accommodative. We jelled effortlessly. We worked together towards one goal which was obviously to win the league. Everyone was absorbed by the vision and we worked so hard for each other to reach our objective.

“I played as a left fullback most of the time. Well, initially I’m a central midfielder, so playing as a fullback was one of the finest experiences for me.” – South African international footballer, Rachel Sebati.

I played as a left fullback most of the time. Well, initially I’m a central midfielder, so playing as a fullback was one of the finest experiences for me. Thus, having three assists is an enormous accomplishment for me.

The league victory means that the team will participate in the UEFA Women’s Champions League. You previously featured in the competition with Minsk in Belarus. Please tell us about that experience.

It was an experience of a lifetime I must say. It was really challenging of course; I mean the level and intensity at that stage is extremely high. When playing against the best teams you get an opportunity to see what your defects are and how you can improve some of your qualities as a player and as a team. Their technical quality is on point. Every player knows their tactical role and the ball possession of the team is on another level. The experience was awesome! Through such experiences we get to learn so much, compared to playing against teams that are on the same level as ours.

Letago Madiba recently spoke to us about sharing her football journey with you. How has it been for you to have her by your side?

Letago and I have formed a very solid bond since we got here. It is a blessing to have her by my side every single day. There is never a dull moment when we are together. I believe God joined our paths for a good cause and it is already manifesting, and it will continue to. Playing with her is always special, we played together since we were in SA. Our journey began in 2016 playing for TUT to this day. Playing with her on an international scene is a privilege. Our combination has improved, and we understand each other better than before.

Where does Rachel’s passion for soccer come from?

“I started as a ball girl and eventually the coach allowed me to train with them. That’s how the journey started. I played for Dikgading Ladies in Botlokwa up until I finished Primary School. I was then selected to play at the HPC (High Performance Centre) and I was there throughout my High School journey. The HPC had a great impact in my football career. I went on to play in the Sasol League for UWC for 3 years, moved to TUT and played 3 years.” – Sebati reminisces of how her journey in football began.

My sister Velly Sebati used to play football, so I used to follow her when she was going to training. I watched her train most of the time and then their coach Mpota who I call Bashen called me to be their ball girl. I started as a ball girl and eventually the coach allowed me to train with them. That’s how the journey started. I played for Dikgading Ladies in Botlokwa up until I finished Primary School. I was then selected to play at the HPC (High Performance Centre) and I was there throughout my High School journey. The HPC had a great impact in my football career. I went on to play in the Sasol League for UWC for 3 years, moved to TUT and played 3 years there until I got this chance of playing abroad.

Living your dreams does not come free of disappointments. What have been the lows?

One biggest disappointment was when I captained Bantwana during the Under 17 2010 World Cup in Trinidad and Tobago where we were beaten 10-1. Well, it was one of the greatest achievements don’t get me wrong. We are the first group to have qualified for the World Cup. Nevertheless, the disappointment emerged when I came to realise how behind our nation is in terms of women’s football development. It was disappointing to understand that we were actually thinking that we were good enough but only to learn that we were just amateurs and there is still so much work our country still needs to do in order to improve the level of women football.

What changes do you think need to be made in that regard? [woman football development]?

There are so many changes I wish could take place in SA women’s football. Women’s football in SA should be recognized and be of high importance to our federation the same way in which men’s football is. I mean a typical example; in women’s football there are often more financial difficulties as compared to males. I believe changes will only take place if SAFA could make it their priority to engage with companies to come on board and assist to make sure that there is better dispensation for women. It is vitally important to mention that Sasol is appreciated for coming on board since 2009. Their loyalty is indeed appreciated by all women involved.

Also, an improved coaching qualification and introduction of minimum requirements for league coaches would be much appreciated too.

We are seeing many South African female footballers signing contracts with international clubs. How do you see this influencing our national team?

I think this increase of SA female footballers signing contracts with international clubs positively impacts the growth of the national team. It is indeed beneficial to our nation because more players will gain experience playing abroad when/if they play frequently. Also, when we represent SA well abroad it also opens more opportunities for others back home.

What advice would you give to young girls looking to make a career out of playing football?

Firstly, it is a privilege to be able to do what you love, I mean that’s something that not everyone gets to do. To the young girls looking to make a career out of football, do what you love, believe in your ability and know that there will be trails and tribulations along the way. Nonetheless, the important thing is to not quit but keep going because at the right time, at the right place, God will most definitely show up. Do not quit!

“Football is not a lifetime career; it can end anytime. It is not an assured career that you can lean on for the rest of your life. Therefore, it is important that one goes to school and obtain their qualifications to have something to fall back on.” – Sebati shares advice to upcoming female footballers.

Secondly, football is not a lifetime career, it can end anytime. It is not an assured career that you can lean on for the rest of your life. Therefore, it is important that one goes to school and obtain their qualifications to have something to fall back on. There is life after football so it is wise to not only lean on that, it doesn’t last longer than one wish it could.

When all is said and done and you reflect back on your football career, which box or boxes would you say are top priority?

My greatest ambition in football is to always win trophies and competitions that I partake in. The motive behind this is I want to finish my football career and assertively say predominantly to myself, “You did yourself proud.” That would be the best reward for myself at the end of my career.

Additionally, I would love to be a good example to the upcoming generation. I want them to look at me and feel inspired and have a reason to continue in whatever they might be striving to accomplish.