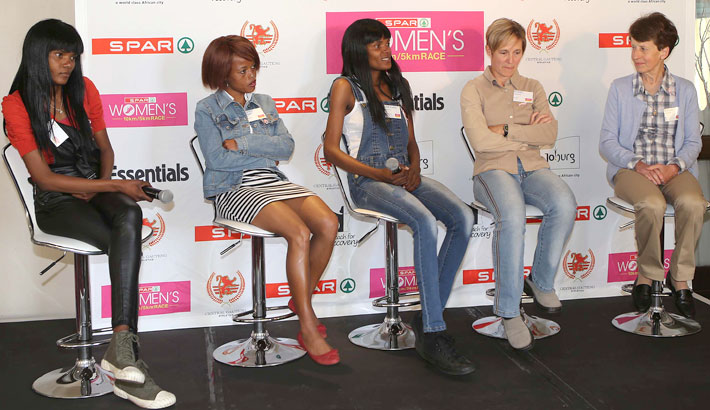 With the recent cold front moving away, City of Gold residents’ thoughts have turned to spring and the SPAR Women’s 10km Challenge, which like the 5km Fun Run, will start at the Wanderers Club in Illovo on Sunday, 12 October.

The race boasts a course designed by the evergreen Sonja Laxton, one of South Africa’s most successful runners of all time.

The 10km route takes the runners along Corlett Drive and Oxford Road as far as Riviera Road in Killarney, before zig-zagging back through some of Johannesburg’s leafiest suburbs.

While the race is really about the thousands of women who will take to the streets on 12 October, there is fierce competition for line honours among South Africa’s elite road runners.

Diana-Lebo Phalula is virtually assured of winning the Grand Prix and receiving the keys to her own Nissan Micra, but a number of runners could finish second on the ladder and win a cheque for R50 000.

Among those jostling for second place are three times Grand Prix winner, Rene Kalmer, Phalula’s twin sister Lebogang, who finished third in the Pretoria race on Saturday, after winning the Durban race a week before, and last year’s Grand Prix winner Mapaseka Makhanya.

Irvette van Zyl, who has won the Grand Prix twice, has made a late surge, winning the Pretoria race in record time, and on current form, she could pose a real threat to the front-runners.

For the more casually-inclined of runners, the 5km route meanders through the plush suburbs of Illovo, Melrose, Birdhaven and Atholl-Oaklands, giving runners a chance of peeking at some of the most beautiful gardens in Johannesburg.

The race is well-known for the congenial atmosphere, with many entrants making friends for life with someone they met on the road. There is plenty of entertainment at the finish, with acclaimed pianist and singer Bongi Mthombeni ready to have everyone clicking their fingers and tapping their toes.

There is also a Kiddies Area, where youngsters will be cared for and entertained while their mothers take part in the race.

As always, there are wonderful prizes on offer, including a lucky draw for a Nissan Micra, the Bring-a-Buddy competition, where an entrant and her friend can win New Balance shoes, and the schools competition, where the school with the most entrants can win prizes from electronics giant Mustek.

The Johannesburg Challenge coincides with Breast Cancer Awareness Month, and proceeds from the race will go to Reach for Recovery, a support group for women who have been diagnosed with breast cancer.

The Reach for Recovery volunteers have all had their own encounters with the disease, and so they are in a perfect position to talk to and counsel women who have just heard those ominous words “you have breast cancer.”

Entries for the race opened on September 1, and close on September 27, although late entries will be accepted between October 9 and October 12. Entry forms are available from all SPAR, Superspar and Kwikspar stores, or online at to www.spar.co.za or www.sparwomensrace.co.za.

Photo 1 caption: Among the frontrunners expected for the 2014 Johannesburg leg of the SPAR Women’s Challenge are (from left) Lebo Phalula, Poppy Mlambo, Lebogang Phalula, Ronel Thomas and the evergreen racer Sonja Laxton, pictured during the race launch on Tuesday, 2 September 2014, at the Wanderers Sporting Club, Illovo in Johannesburg. Photo: Reg Caldecott