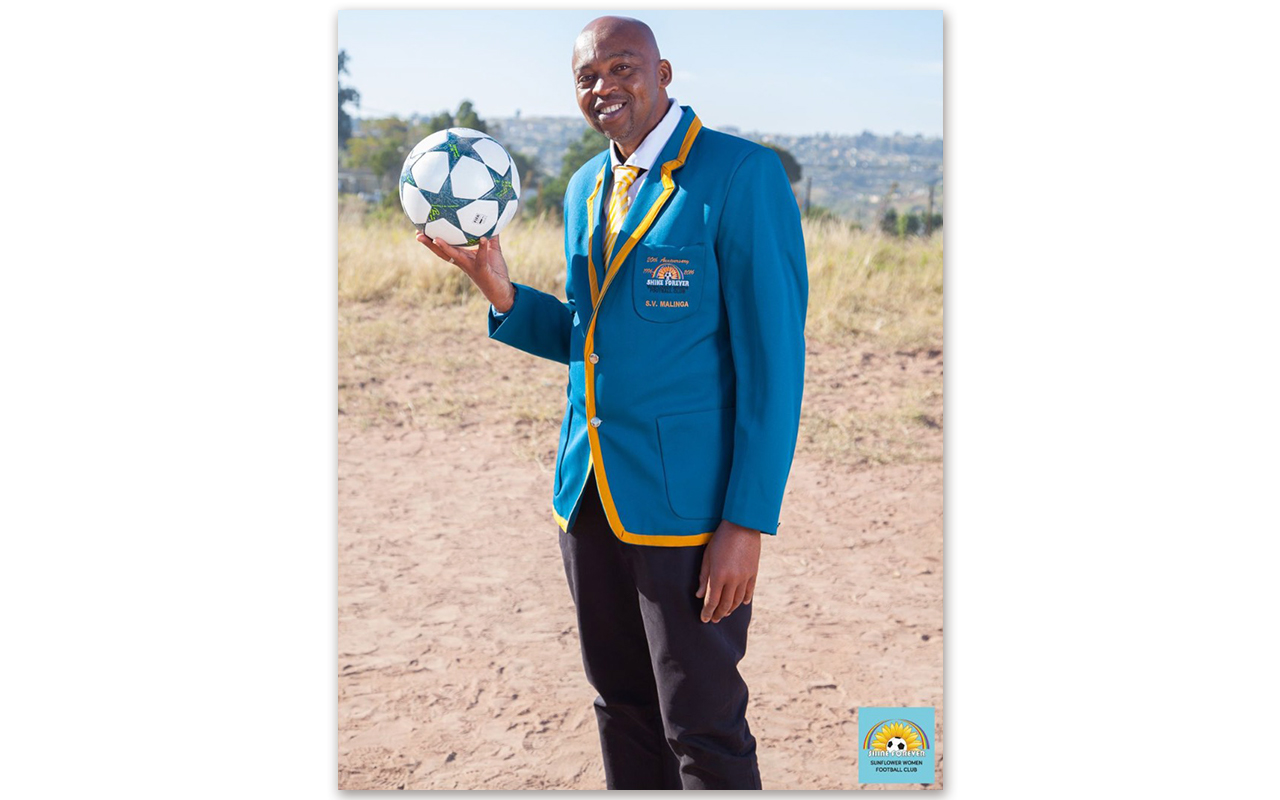 In celebration of Sunflower FC’s 25th anniversary, founder and head coach, Siyabonga Malinga, is aiming to continue building on the club’s vision to keep young girls off the street uplift and focused on pursuing their footballing dreams.

Over the years, the team has been growing from strength to strength, with two players – Ongeziwe Ndlangisa and Ntombifikile Ndlovu – earning national team call-up’s.

Coaching a female club has brought about many challenges, however, Malinga is determined to overcome them by drawing in more sponsors to ensure stability within the club’s structures.

Malinga admits that he feels that he should play his part to develop female athletes and is determined to help his team gain promotion into the SAFA National Women’s League.

Speaking with Babsie Kutwana, Malinga reveals the team’s plans to create an excellence centre for football in Hammersdale and equalling the playing field in the sport.

Hi Siya, thank you for taking time out to chat! Recently, Sunflower FC got off to a winning start in the Sasol League. What has it been like to have football in action after months of inactivity?

A breath of fresh air after being indoors for a long time, literally. Players missed this moment; it was evident during their training sessions and also in matches.

We can only imagine! Let us talk more about the club, what inspired you to form Sunflower FC?

In 1995/1996 there were Love Life games tournament that included boys and girls. I formed a girl’s school team from Ingede Higher Primary School comprising of 100m & 200m athletes and a few girls. They played very well winning games and competing up to National Level.

In the year 1996, I decided to form a ladies’ team because I wanted to keep the talent, so it does not go to waste, and I continued with grooming and maturing them. I also wanted to protect the girls from social ills such as early pregnancy and substance abuse that can hinder their progress with playing football.

You have a great passion for women empowerment where does it stem from?

That is very true. I have noticed that we still not treating women’s football equally as men, yet women are the backbone of the nation. We need to take care of them. They need to feel very special in many ways. No need to segregate them as if they are not capable of doing anything. They need to prove themselves without feeling restricted.

How have you managed to maintain a relationship with your sponsors?

We have invested on our administration capacity by using past players, parents and our friends to assist with detailed reports. Transparency and mutual respect on both ends, and obviously making sure that we deliver the best results possible that can make our relations with sponsors sustainable.

Sunflower FC is more than just a football club, it contributes to the community. Why is this important to you?

The club is more than just a football club, it is a family because it is made up of players, parents, Executive Committee (EXCO) and community members. One player is representing a family, if you help one player you have automatically helped the whole family. Our players are coming from destitute families and others are from child-headed backgrounds, it is therefore our responsibility as the club to assist where we can.

You have two players (Ongeziwe Ndlangisa and Ntombifikile Ndlovu) who have represented the National team and are not the first nor the last. How do you feel whenever your players are selected to represent the nation?

We pride ourselves as a club whenever our players are getting call-ups. That simply outlines our hard work as a club and on the right track of developing and grooming players.

How has your family played a role in their support of you and your dream?

The club is governed by EXCO members made up of parents and former players so the support to sustain the vision has been made possible in particular by that support not only my family but the whole Hammersdale and KZN sport family.

What are your hopes for the clubs?

It is the clubs desire to qualify for SNWL (SAFA National Women’s League), however that will be a reality if the job is done here at home in KZN.

What challenges do you face as a coach of a Women’s team?

Challenges are facilities and transport, yes participating in the league is advantageous on players growth but growth is hindered by            lack of facilities and travelling funds hence we call upon corporates for financial injections towards the club’s vision.

Our future plans is to create an excellence center, which is the main club’s vision.