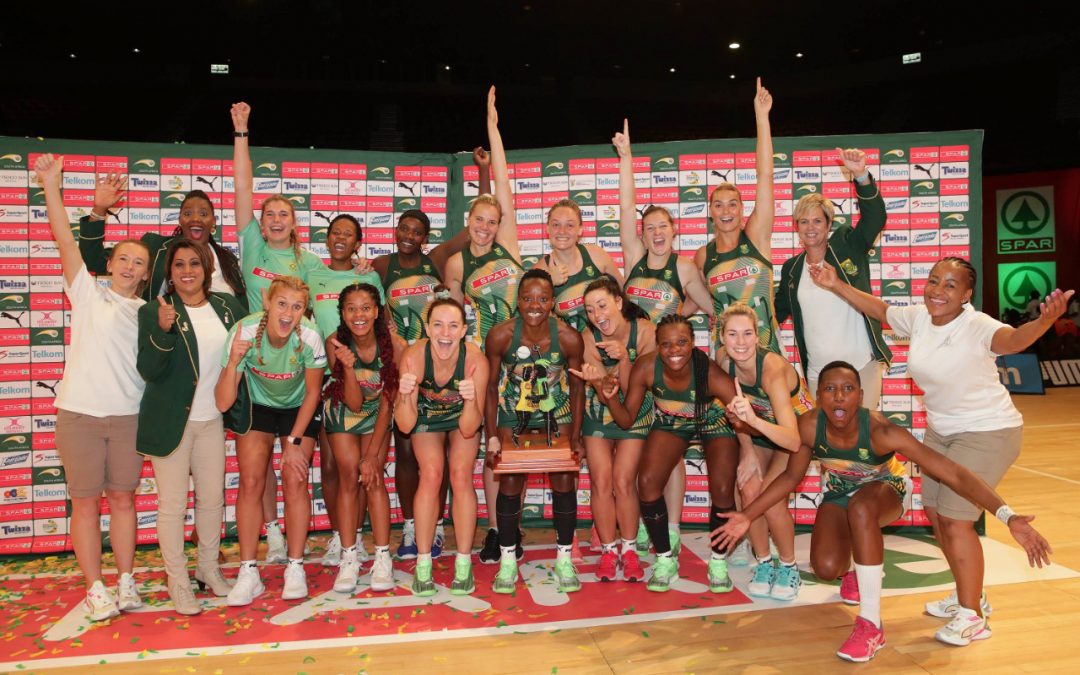 South Africa made a clean sweep of the three-match SPAR Challenge Netball Test series against Malawi with a record-breaking 41 goal win in the third and final Test at the Sun City, Superbowl on Sunday, 29 November 2020.

The SPAR Proteas won the match 69-28, after leading 36-16 at halftime. The winning margin was one goal better than the previous record, set on the first match on Thursday night.

The start was scrappy, with both sides making mistakes and losing their circle, and the first goal was scored only in the third minute of play.

Captain Bongi Msomi left the court with an injury in the first minute, and was replaced by Tshina Mdau.

The first quarter was a bit of a dogfight, with Malawi achieving their best start of the series. South Africa were 14-9 ahead at the end of the quarter and won the second quarter 22-7.

“We achieved more than we expected in this series.” – SPAR Proteas coach, Dorette Badenhorst

The defenders on both sides were very effective, achieving numerous turnovers.

South African goalkeeper Phumza Maweni and goal attack Shadine van der Merwe were a formidable combination, and lead once again gave SPAR Proteas coach, Dorette Badenhorst the freedom to bring on the rest of her team in the second half.

The SPAR Proteas surged ahead, outscoring the Malawi Queens by 20 goals to four in the third quarter and 13-8 in the final 15 minutes. The last quarter was their worst of the tournament, with a number of wild passes and sloppy mistakes but they got the job done.

“We achieved more than we expected in this series,” said Badenhorst. “It is not often when you play African teams that you are able to play all 15 players in your squad. We met the targets that we set in each of the matches and I am very satisfied.”

Malawi coach Peace Chawinga-Kaluwa said she was disappointed with the outcome of the series.

“This has been a big wake-up call.” – Malawi coach, Peace Chawinga-Kaluwa

“We are grateful to have played some international netball but when we go home, we know that we have to make sure the players don’t remain idle, but that they keep fit for action.

“The lack of match fitness was a problem, and they were unable to take the momentum through to the later stages of the match,” she said.

Shadine der Merwe was named Most Valued Player and Player of the Series, Lenize Potgieter scooping the Best Shooter award, Khanyisa Chawane getting the nod as Best Mid-Court, and Phumza Maweni Best Defender.

The SPAR Proteas will play a series against Uganda in early 2021.

South Africa are currently ranked fifth in the world, with Malawi sixth and Uganda seventh.