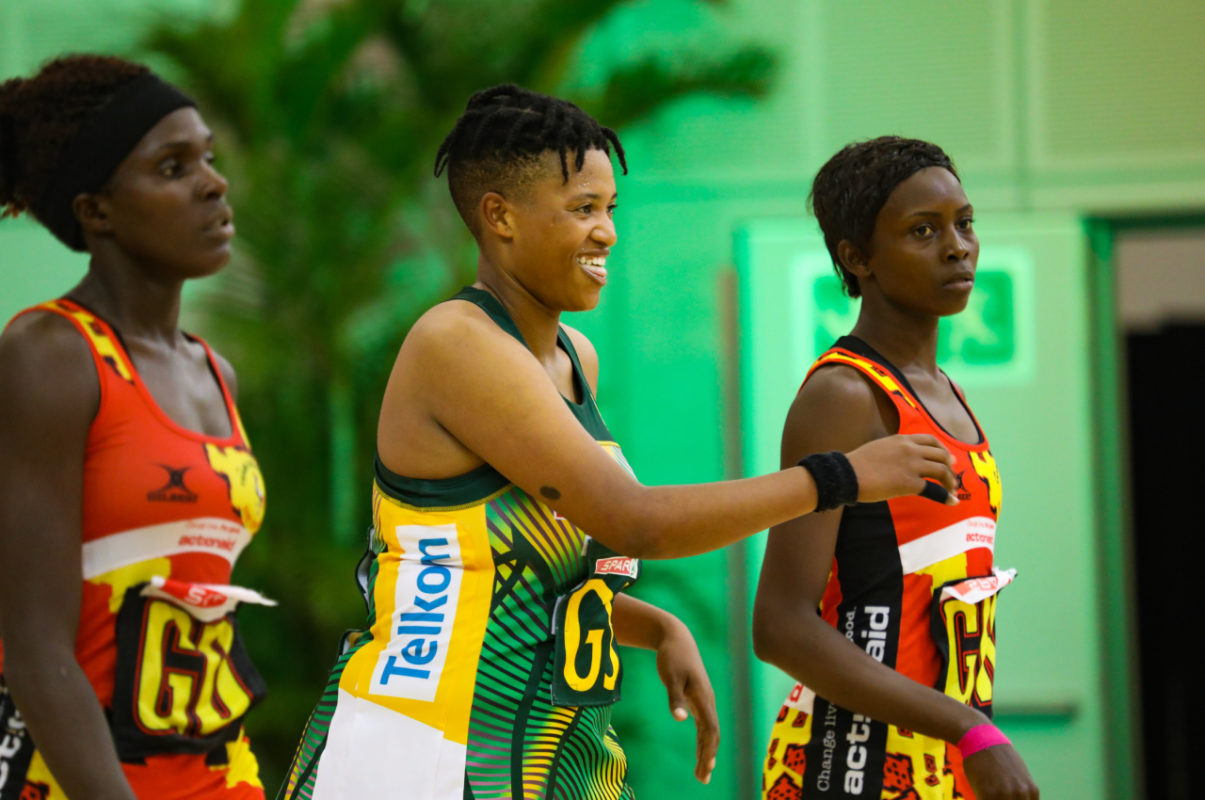 The SPAR Proteas got off to a winning start in the SPAR Challenge Tri Nations tournament at the Cape Town International Convention Centre on Thursday, 25 March 2021, with a convincing 58-30 victory over Namibia.

With a number of Proteas unavailable for selection because they are playing league netball in Australia, New Zealand and the United Kingdom, head coach Dorette Badenhorst fielded a blend of experience and youth, with five new caps. She was able to use all 12 members of the squad, giving the less experienced players valuable game time ahead of the more challenging match against Uganda on Thursday evening.

“We played well for a first game,” said Badenhorst.

“Our conversion rate from centre pass was good, but there were still a lot of mistakes. The team needs to adapt to the new circle players, without regulars like star shooter Lenize Potgieter.

“With hard work, I am sure they will be at the World Cup in 2023.” – SPAR Proteas head coach, Dorette Badenhorst, speaks on the new players in the national team.

“I was pleased with the performance of the new caps. They will have got rid of some of their jitters, which is important, because this evening’s (Thursday) match against the Uganda She Cranes will be a different story.”

She praised the Namibian Debmarine Desert Jewels, saying they were an exciting up and coming team.

Namibian coach Julene Meyer expressed frustration at the number of unforced errors from her team.

“We were conceding between six and eight goals a quarter because of unnecessary mistakes,” said Meyer.

“I think we are still in third gear. We need more exposure to the speed and intensity of a match against one of the world’s top teams.”

South Africa Proves to be a Stronger Opponent Against Uganda

A clash between the SPAR Proteas and the She Cranes was never going to be an easy one. Both teams are ranked fifth and seventh, respectively, in the world according to the International Netball Federation. The last time these teams met, South Africa won and therefore Uganda came into this match with revenge in mind whereas South Africa had no intentions of losing on home soil.

This match was dubbed as the match of the day and it sure lived up to expectations as both teams did not hold back and brought everything they had to each other. Badenhorst started her game with the same team that started in the opening match.

The first quarter was a closely contested affair with South Africa taking a narrow lead of a single point 11 -10. The second quarter was just as tight with both teams cancelling each other’s goals out. The SPAR Proteas enjoyed a slim lead of a point throughout the second quarter and went into half time leading 22 -21.

Badenhorst did not really tamper much with the formation of the team as she only made two changes of Tshina Mdau and Izette Griesel the entire game. This strategy yielded positive results as the team won 49 -34 at the end of the clash.