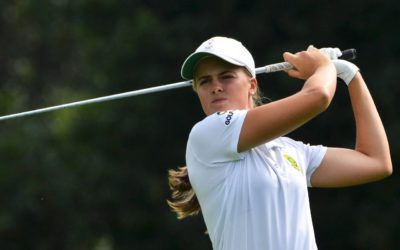 Durbanville golfer, Kaylah Williams, put the perfect exclamation mark on her final competitive appearance for the 2020 season with a masterful victory in the prestigious Ackerman Championship.

Defending champions Gauteng will be up against tough competition in the A Section of the Pick ‘n Pay Inter-Provincial Golf Championship, which takes place at Clovelly Golf Club in […]

On Monday Kelli Shean had a rough first round of the Stroke Play event, but went on to shoot a course record of 6-under par in the afternoon, to tie […]

Round two of the 2007 Sanlam SA Amateurs Championship at the magnificent George Golf Course contrasted sharply for the two tournament favourites, as day 1 leader  Kelli Shean disappointed to […]

Defending Champion Ashleigh Simon shot a reasonable first-round 1-under par 71 to stay in contention for the 2007 Sanlam SA Amateurs at the George Golf Club on Sunday, but it […]

Western Province will field a strong team at the upcoming Inter-Provincial Golf Tournament happening in Germiston from September 17-22.

As female golfers from around the country prepare for the Inter-provincial golf tournament in Germiston later this month, the Southern Cape Ladies Golf Association (SCLGA) is celebrating the successful hosting […]