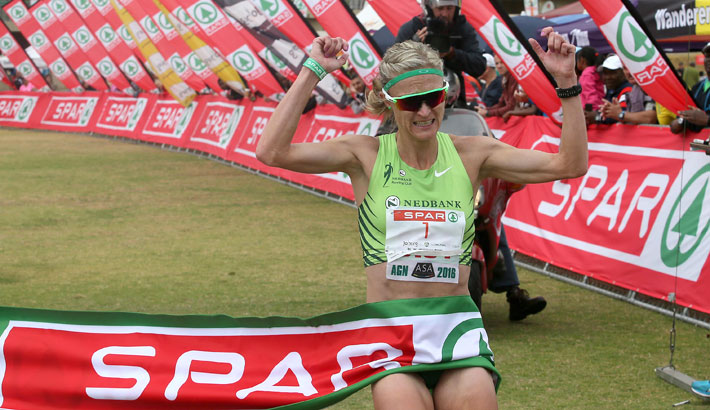 A determined Irvette van Zyl (Nedbank) led from start to finish in the Joburg SPAR Women’s 10km Challenge at the Wanderers Sporting Club to win in 34.58 minutes. At the same time she made sure of winning the 2016 SPAR Grand Prix for the third time.

Mapaseka Makhanya (Olifantsfontein) came from nowhere to claim second place in 35.46 minutes, ahead of Rutendo Nyahora (Nedbank), who finished in 36 minutes.

Van Zyl, who had to withdraw from the Olympic Marathon in Rio in August because of a stress fracture in her foot, set the pace from the start and opened up a 40 second gap before the first kilometer mark. Van Zyl won the first three races, in Cape Town, Port Elizabeth and Durban, but was unable to run in Pretoria because of her injury.

“I knew what I had to do to win the Grand Prix. I got into the lead on the first uphill and decided that I was going to run my own race. If the others wanted to catch me, it was up to them,” said an elated Van Zyl.

“I’m so happy to have won and I am so glad it’s over – I have had nightmares about this race for about four weeks.

“I really wanted to win, to make up for my Olympic Games disappointment. I had planned to use the Olympic Games to compensate for my previous Olympic disappointment, when I had to drop out of the race in London, so I really need something good to happen.

“I think possibly I went out too fast and I forgot about one or two hills, so I struggled a bit in the last two kilometer’s, but I kept thinking about my little boy and my husband LJ, and was so happy when I got to the finish line and they were waiting for me,” she said.

With Van Zyl in command throughout the race, the real battle was for second place. Nyahora and last year’s winner Lebogang Phalula ran together for the first seven kilometers, with the lead changing hands frequently, before Makhanya surged ahead to claim second spot.

“I have been battling with injury for some time, and it was good to be running pain free,” said Makhanya. “I am very strong mentally and I am very patient, and I used my patience today to surge at the right time. This 10km race is part of my training for the Shanghai Marathon at the end of October, and I am feeling very good,” she said.

“I was strong on the hills and that is what helped me.”

Nyahora said she was very happy to be on the podium and delighted to see her teammate Irvette van Zyl back in form. “The SPAR race is always very important to me,” said Nyahora.

“Lebogang and I were challenging each other, but I think what helped me was that I was stronger on the hills. I am grateful to her, because she helped me push myself because I was determined I was going to beat her.”

Phalula, who ran her first marathon three weeks ago, dropped off the pace about midway through the race, and finished in sixth position, behind Glenrose Xaba and the Botswana runner, Onneile Dintwe. Phalula’s twin sister, Diana-Lebo, finished eighth.

Photo 3 caption: Nedbank runner Van Zyl completed her fourth title win in the 2016 SPAR Grand Prix in a winning time of 34:58, after maintaining her lead from start to finish. Photo: Reg Caldecott

Photo 4 caption: Welcoming race winner Irvette van Zyl at the finish line were her Olympian husband, LJ van Zyl and baby boy LJ junior. After the race, Van Zyl described how the thought of her husband and son helped her to cross the line during a difficult final two kilometres. Photo: Reg Caldecott 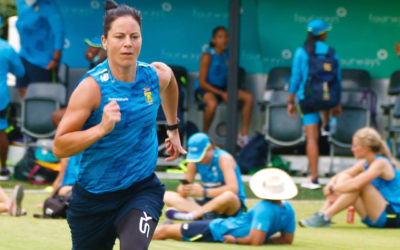