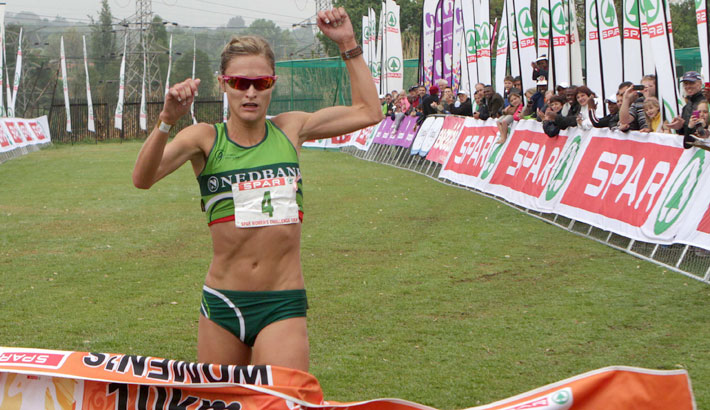 Watch Out, Phalula… Van Zyl is Back

After a break of nearly four months, the SPAR Women’s Grand Prix gets under way again over the next two weekends, with the Durban and Pretoria Challenge races in quick succession, and the race to the Grand Prix title is hotting up with the return to form of two time Grand Prix winner, Irvette van Zyl.

The Durban race will be run from Kingsmead on Sunday August 24 and the Pretoria Challenge takes place on Saturday August 30 at Supersport Park in Centurion.

Maxed Elite runner Diana-Lebo Phalula has a headstart after winning the Cape Town and Port Elizabeth races. With bonus points for beating the previous years’ time in both races, she now has a massive 60 points on the leaderboard – 26 ahead of her nearest rival, Mapaseka Makhanya.

While Phalula may feel she has one hand on the key to the Nissan Micra which will be presented to the overall Grand Prix winner, she may be casting a nervous eye over her shoulder at Van Zyl, who has come storming back into contention after struggling with injuries for nearly two years.

Nedbank’s Van Zyl gave notice on August 9 that she was once again a force to be reckoned with when she won the Totalsports Women’s race in 32.20 minutes – the third fastest 10km by a South African woman. Van Zyl’s time equaled that set up by 17-year old Zola Budd in Bloemfontein in 1983.

Van Zyl recently changed coaches and says the training programme devised by Lindsey Parry has brought her back to where she was before she was injured.

“For the first time in 15 months, I’m running pain free. Lindsey had me swimming and cycling during my rehab period, and this kept me fit. Now I’m faster than I was before my injury.

“I am feeling very good, and I am over the moon about my time in Stellenbosch. It came as a bit of a surprise – I’ve been preparing for the Cape Town Marathon in September and didn’t think I had the speed for a time like that.”

Phalula won the Port Elizabeth Challenge in 32.27, so there could be a great tussle for line honours in Durban between Phalula and Van Zyl, while Makhanya and Kalmer can be expected to give them a good run for their money in both races.

“I think it’s going to be a very fast race,” said Van Zyl. “Lebo, Mapaseka, Rene and I will all be giving it our all.”