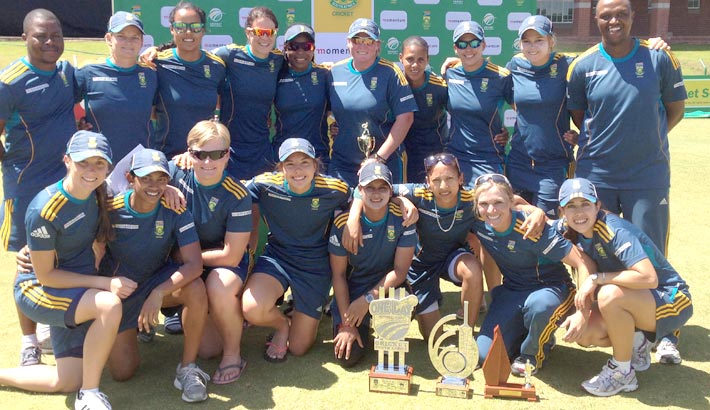 Mignon du Preez played a captain’s innings to lead the Momentum Proteas women to their second consecutive T20 series victory, when they beat Sri Lanka by five wickets in Potchefstroom on Monday.

Sri Lanka were restricted to the modest score after they were put in to bat by Du Preez. Loubser produced a fine all-round performance when she made the initial breakthrough, removing Lasanthi Madushani in the first over and following that up by scoring an unbeaten 37 runs in her side’s reply for the win.

The Sri Lankan top order once again struggled at the start of their innings. They lost Madushani, Chamari Atapattu and Yasoda Mendis for 10, zero and one respectively. Skipper, Shashikala Siriwardena (21), shared a 70-run partnership with Eshani Kaushalya (50) to give their side a fighting chance.

They started out well with the ball when Maduri Samudikka got rid of Lizelle Lee in the second over without scoring. Siriwardena took a wicket in each of the four overs she bowled, removing Trisha Chetty (13), Marizanne Kapp (7), Dané van Niekerk (6) and Chloe Tryon (1) to frustrate the hosts and forced the required run rate up.

Du Preez and Loubser entered the fray when South Africa were in a difficult position but calm heads prevailed. Loubser hit two sixes and a four to reach her 37 not out, while Du Preez smashed five boundaries (including the winning shot) to take her side all the way.

“It’s been a really good few months for us and it’s all due to the members of the team who have each taken on our plans and the direction that we want to take it,” commented Du Preez.

“It’s a great privilege to play with a bunch of girls who are keen to get the job done and want to play positive cricket, be positive influences on one another and build each other up,” she said.

Loubser was pleased with her batting effort after not having had to play a major batting role in a long while. The 31-year-old is enjoying her cricket more than ever. “This is only the second opportunity I’ve had to bat in the last few months because our batters have been in such good form.

“Mignon really kept me calm and helped me enjoy the match. It’s really great for me to see that I’ve still got it at my age, and I’m just really grateful to still be able to make a contribution to the team.”

Siriwardena was disappointed with the loss but happy to see good individual performances coming out from her side. She acknowledged that she has a young and an inexperienced team but is content with the growth she has seen in her players as the tour has progressed.

“I’m happy with the individual performances, we are learning a lot, but we have to improve our game sense,” she said. “It is important to get a good start, that is where we are struggling but we are taking back a lot of positives and we also have a new coach who is teaching us a lot of things so we are fairly happy with the tour in the end.”