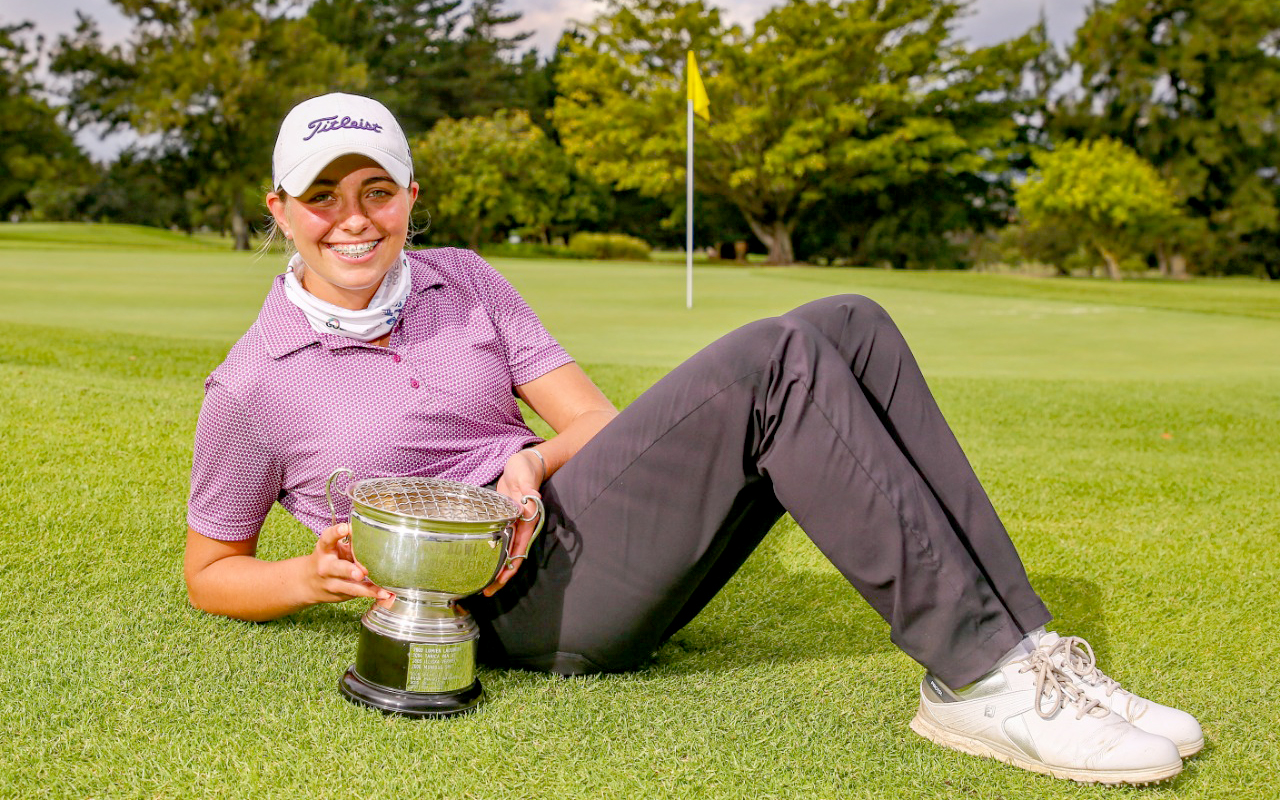 Isabella van Rooyen closed out victory in the Nomads SA Girl’s Rose Bowl Championship on Monday, 26 April 2021, to secure her first national title and open the door to a new chapter in her young career.

The 18-year-old Clovelly junior cruised to a two stroke victory at Durbanville Golf Club, resisting the pressure from the chasing pack with a mature and consistent final round performance to close with a one-under-par 71 and finish the week victorious on five-under 211.

Van Rooyen was inducted into the GolfRSA B-Squad earlier this year and winning one of two crown jewel junior events on the national circuit meant much more than just bagging her first big title.

“I knew that my selection to the squad was based on performance, but to be honest, I felt under pressure to prove that I was worthy of the honour,” she said. “Now I feel like I can stand proud, because I’ve shown everyone that I am deserving of the spot.

“I’m surprisingly calm, given that I really felt the pressure down the stretch. I thought I would be completely exhausted. That’s probably going to come later, because right now I just feel joy about this achievement.

“From the moment you tee it up in your first Nomads SA Girls tournament you want to win one. For me it was my first Rose Bowl at Royal Cape three years ago. I tied for 25th that year and in every SA Girls after I improved. To stand here now holding the trophy means the world to me. This is going to inspire me in the biggest way to keep raising my game and my goals.”

Van Rooyen opened with a level par round of 72 to stake an early claim in the top five.

She was still a few shots off the pace through the turn in the second round, but a birdie on the 12th and an eagle on the par-five 15th for a four-under 68 propelled her into the top three. She began the final round two shots behind Whateley on six under and one behind Brown on four under.

“You just have to get over the ball, put a good swing on it, walk after it and hole putts.” – Van Rooyen speaks on her performances.

“I was nervous, because you can’t control what your opponents do on the day. You just have to get over the ball, put a good swing on it, walk after it and hole putts,” Van Rooyen said.

Holing crucial putts on the two par fives in her outward loop was how the Grade-12 learner gained the lead and kept her advantage going.

“The wind was up on the last day and made things a lot tougher. My drive on the fifth finished just off the fairway. I didn’t have a great lie, so my dad (Jan) and I decided to go with the 3-wood. If it came out well, I’d reach the green and it if didn’t, I’d be just short and still have a chance,” she explained.

“I landed it just short right, chipped to five feet and boxed the birdie putt. I drove it down the middle in the same spot on the fifth all three rounds, leaving me with about 165m to the pin. On the last day, I hit it pin-high right and I holed a huge swinging right to left putt for eagle to get to six-under.”

Leading for the first time, the junior made crucial par saves, dropping just one shot on her home.

“The best two par saves was at 11 and 14. I pitched it pin-high right on 11, but I got a huge bounce and finished in the trees. I had no green to work with, so my best option was the pitch it in the fringe. Bobbi had a chance for eagle, but she missed, so that par save really saved my round.”

On 14, her lob-wedge approach pitched and bounced off the back, but she saved par with a superb up-and down.

“I lipped-out for par on 15 after doing a great job to get on the green, so that was unfortunate. The wind pushed my drive into the trees, but I had a tiny gap and punched out and I left my third just short of the green. I hit a great chip, but then my par putt lipped out.

“I have to credit my dad for doing an awesome job. He only got one club wrong in the tournament but he made up for it with great advice and keeping me focussed and in the moment.”

Van Rooyen rose to ninth in the Open Rankings on the back of runner-up finishes in the KwaZulu-Natal and WP Women’s Amateur Championships this season and victory in the Nomads SA Girls Rose Bowl boosted her to fifth in the Junior Rankings.

“I am really happy with my performance and the way I grinded through the tough moments. It was definitely a benefit that I’ve played in these events before. Our GolfRSA tagline is #itstartshere and I would like to give Nomads South Africa a huge shout-out for their continuous support of junior golf in South Africa. It really starts right here in the Nomads junior tournaments.

“This win is really meaningful, because it brings me closer to my big goal, which is to earn national colours. Hopefully I can put in a few more strong finishes before the Nomads SA Girls in July, because I’d love to do the double this year.”

Ashley Huysamen went wire-to-wire with rounds of 78, 82 and 86 to celebrate a popular home win in the Silver Division. She triumphed on 14-over with a four-stroke victory over Gia Raad from Country Club Johannesburg. Tyla Potgieter from Atlantic Beach Links placed third.

Tamsen Skippers lifted the Bronze Division title. The Kuils River junior was counted in as the winner after tying with Kimberley’s Alexandria Botes. The pair tied on 72 points, with Skippers carding rounds of 32 and 40, while Botes registered scores of 35 and 37.