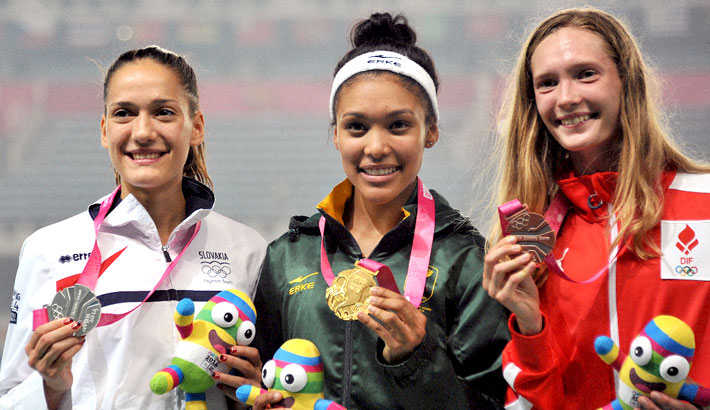 Magerman the Toast of Team SA in Nanjing

The sun shone down brighter on Monday than it has since Team South Africa arrived in Nanjing, China, and there was a glorious golden glow about the team after Gezelle Magerman ran her way into the record books and won South Africa’s first medal of the 2014 Youth Olympic Games.

The slimly built Paarl athlete ran what was ultimately an extremely clever race, to win the girl’s 400-metre hurdles final in fine style.

Her time of 57.91 seconds was yet another personal best – PB’s seem to rain down on this youngster much like the rain shower that soaked the Olympic Stadium during the evening finals. Its also an SA Youth record.

When Magerman was crowned African Youth Games champion in Gaborone, Botswana three months ago, the gazelle-like athlete won in a personal best time.

And in the Youth Olympic Games heats, there was another personal best time, and then she bettered that again in the final. “The best moment of my life,” she beamed afterwards, the national flag proudly draped over her shoulders.

“This medal is so precious, no-one’s going to touch it right now, I’ll be sleeping all night with it,” she grinned.

There was definitely some anxiety as the Games went into the ninth day of competition with no medal for the team, and Magerman said she had felt it her build-up.

As for the race itself, Magerman gave everyone more than a little bit of stress as she bounced up out of her blocks and virtually crawled around the opening 100m. Going through the last bend and into the home straight she was lying seventh, and then fifth.

But then the afterburners kicked in and it looked like the field were frozen still in the glow of the Olympic flame, as the young South African blasted past her rivals for what was eventually a pretty easy win.

Runner-up Michaela Peskova of Slovakia was clocked at 58.26, meaning that the pearl from Paarl was 0.35sec clear at the line.

And while the second fastest qualifier, Ellen Demes of Germany walked crying down the tunnel after a fall going into the home straight, Magerman’s smile reached all the way to the southern tip of the African continent.

“I did have a slow start but I don’t really know why,” she said. “I lengthened my strides from about 300m, probably because I didn’t want to fall over a hurdle, and then going around the final bend I kept on remembering how many times I’d practised that final bend with Chris, and then I just pushed hard for the line.

“To be honest, although I knew I was quite far back in terms of position, I never thought I wouldn’t catch them.”

Soon the SA talent have to turn her thoughts back from track to classroom as she starts writing exams in two weeks time, but for now she’s the toast of Nanjing, South Africa and best of all… the world.

Fighting back the tears, American-born coach White said: “This is just the best feeling ever, and making it that much more satisfactory is that we were the first code to win a medal for South Africa.

“I’ve worked with Gezelle since May and African Youth Games, but here my job was mainly to oversee her programme, fine-tune here and there, and mostly to just manage things smoothly.”

Photo 2 caption: Magerman had a slow start, and was trailing in seventh position on the final bend before she concentrated her powers to burst past the competitors, and claim SA’s first medal at the Youth Games. Photo: Wessel Oosthuizen / SASPA

Photo 3 caption: “The best moment of my life,” Magerman beamed after winning, the national flag proudly draped over her shoulders. “This medal is so precious, I’ll be sleeping all night with it,” she grinned. Photo: Wessel Oosthuizen / SASPA