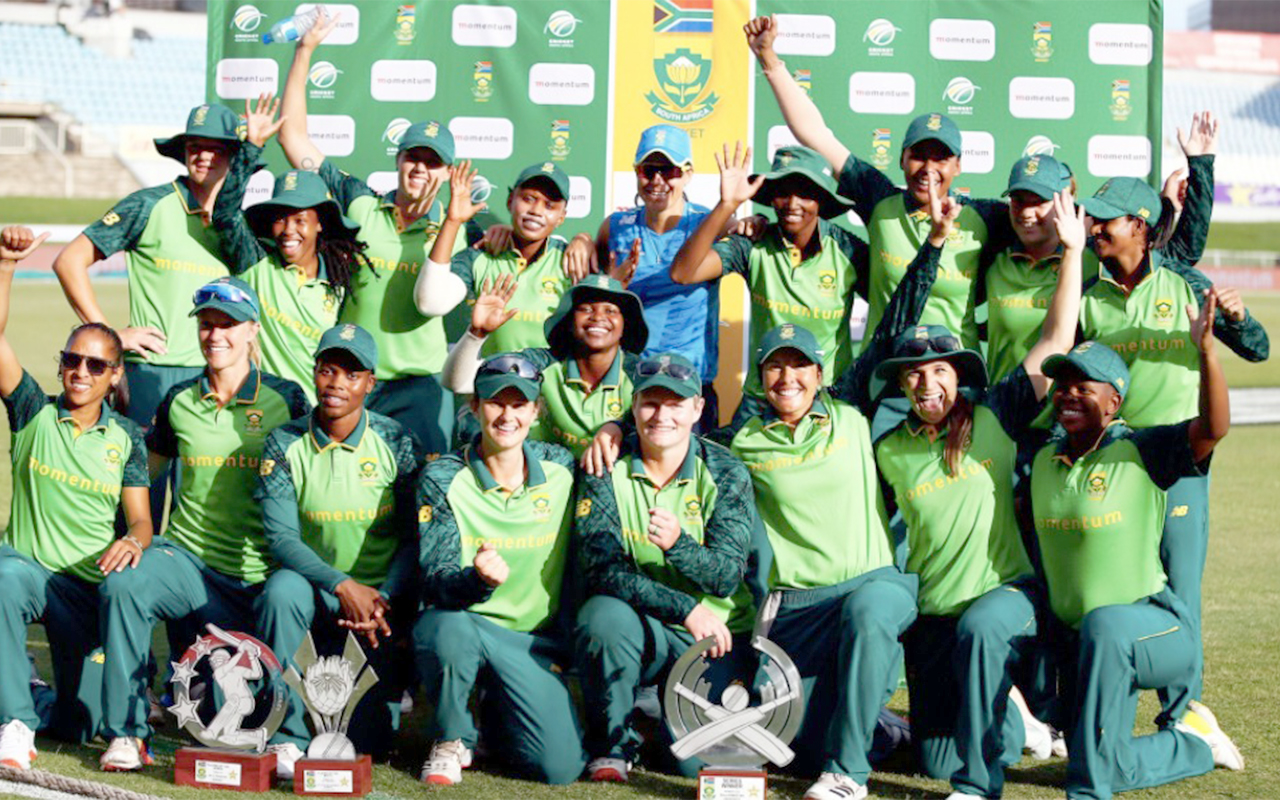 Momentum Proteas head coach Hilton Moreeng is not getting too excited despite all the good signs displayed by South Africa when they returned to action for the first time in nearly a year against Pakistan in Durban.

The three-match One-Day International series ended 3-0 in favour of the hosts, who then went on to claim the Twenty20 International leg by a 2-1 score-line.

It had been a tough 12 months before that for the South African team – indeed all professional sportsmen and women faced uncertainty and disruption that Covid-19 brought with it.

But they responded admirably as competitive action returned via a bio-secure environment (BSE) in Durban.

“This series was a good opportunity to get the girls playing again and build towards the World Cup, especially the one-day part of the tour,” Moreeng said.

“Overall we felt the skills got better as we went along, the bowling and the fielding in particular.

“Batting yes there’s still a few elements we can work on, but the progress made so far from game one shows that the team is moving in the right direction.”

All the matches, the first for the Momentum Proteas since the World Twenty20 in February, were played at Hollywoodbets Kingsmead Stadium.

“One could see the rustiness was there initially and a bit of nerves here and there, but once the competitive edge started taking over you could see the nerves settling and the players starting to execute their skills well.” – Momentum Proteas head coach, Hilton Moreeng

During the ODI series, the dependable Laura Wolvaardt was the leading run-scorer for the hosts with 125 runs in three innings, second overall behind Pakistan’s Aliya Riaz (136). Visiting bowler Diana Baig (nine wickets) lead the way with the ball, two ahead of Shabnim Ismail and Ayabonga Khaka, although the latter only played two games.

During the T20s, Tazmin Brits (118 runs) was the only batter to cross 100 runs even though she played just two of the matches, while Ismail proved world-class by claiming seven wickets on her way to becoming the first South African – male or female – to take 100 international T20 wickets.

Moreeng continued: “One could see the rustiness was there initially and a bit of nerves here and there, but once the competitive edge started taking over you could see the nerves settling and the players starting to execute their skills well. So as far as ODIs go we feel the team is heading in the right direction.

“The same can be said for the T20s, we improved as we went along. It was also good to see youngsters who got the opportunity how they went and it’s for us to make sure we can broaden the base and keep improving in every facet of the game.

“We realise there is still a lot of work that needs to be done. To win the series 3-0, watching how the experience players came through when the chips were down and we had to dig deep as a team that was very pleasing as well.

“With a year to go to the World Cup, the feedback that we have thus far, we showing progress in the right direction.” – Moreeng speaks on the team’s progress heading into the World Cup.

“With a year to go to the World Cup, the feedback that we have thus far, we showing progress in the right direction.”

The women’s game has made enormous gains in recent years, from Cricket South Africa (CSA) awarding national contracts and the establishment of fully-fledged Women’s Super League (WSL). The spin-offs have been the Momentum Proteas reaching the World Cup semi-final in England during 2017 and then the last four of the World T20 in Australia last year.

Moreeng knows they can go even further. “When you have such a long lay-off there are a lot of things that need to be sharpened up,” he adds.

“Players have played a lot of T20 cricket around the globe, so when we have to reset and start playing 50-over cricket again, you can see things happen slowly.

“That competitive cricket between now and then will be very important and that is something we realise and just build on that.”