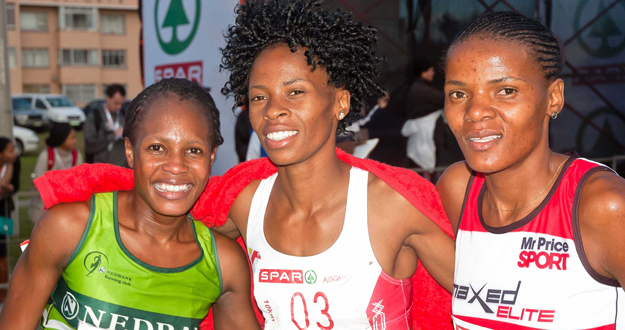 Diana-Lebo Phalula (Maxed Elite) finished second in and Mapaseka Makhanya (Transnet) finished third of the 13,149 runners that took part in the 20th running of the Port Elizabeth edition of the the popular women’s road race.

The top three runners went into the lead from the start, in cold, blustery conditions, running in a close pack. Nyahora moved ahead at the five km mark, and Makhanya dropped back.

“At the start, I was happy to stick with the others, but I decided at five kms that I must make my move and go ahead,” said Nyahora. “I was aiming for 32 minutes, but the wind was strong so that made running quite hard,” she said. “Lebo set a good pace, and really helped me to win.”

Nyahora said she would take a short break, and then start training for the Durban SPAR Challenge race. “I want to win all the SPAR races this year,” she said. “I know that as a Zimbabwean I can’t qualify for the Grand Prix, but I am still determined to make this my year.”

Phalula, who won the Port Elizabeth Challenge in 2011, said she had just gone out to do her best. “I’m not in 100 per cent condition at the moment, but I’m happy with my race. I just decided to go out there and do my best.

“Now it’s back to the drawing board,” said Phalula, “and I will be ready for the Durban Challenge in June. But before that, I’ll be running in the South African 10km Championships in Durban on May 19.”

Makhanya, whose third place put her on top of the Grand Prix ladder, after her second place in Cape Town, said she had battled in the race because of the conditions. “I got very cold, and just couldn’t get warm,” she said.

Makhanya, who has done most of her running on the track, said she was new to road running, but was enjoying the experience. “I’ve got the speed from the track, but I need to put in the mileage on the road,” she said. “I’m moving upwards from 800 metres to 1500 and 5000 metres, and the road running will be very helpful.

“Eventually, I plan to move over to marathons – I plan to run my first marathon in 2016,” said Mahkanya.

Irvette van Zyl, twice winner of the SPAR Grand Prix, said she had had a bad race, finishing in seventh place. “I think I still had the London Marathon in my legs, and I have been struggling for some time with numbness in my left leg. I had to stop at four kms to stretch it, and you can’t afford to do that in a 10km race,” she said.