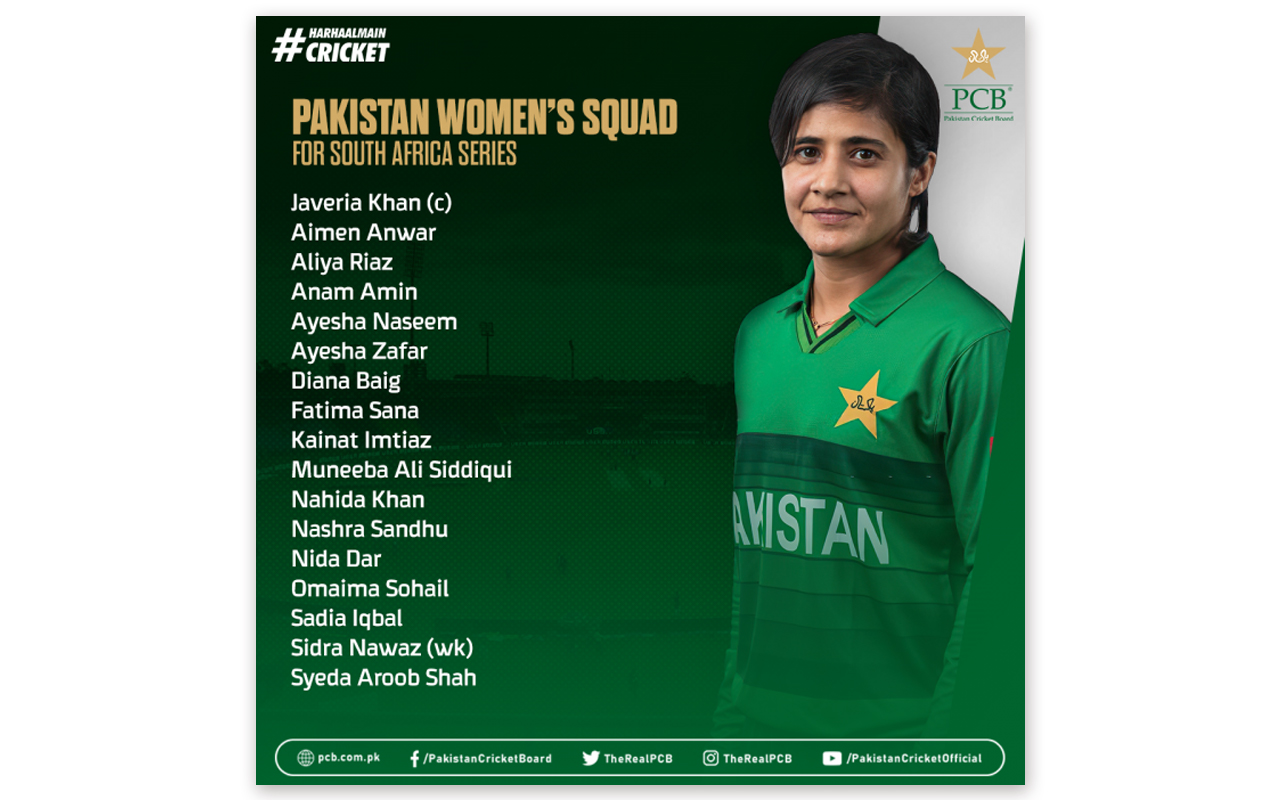 The women national selection committee announced a 17-player squad for ODI and T20I series against South Africa, which will be played in Durban and Pietermaritzburg.

Javeria Khan will take the captaincy responsibilities in the absence of Bismah Maroof.

Urooj Mumtaz-led selection committee, which also includes Asmavia Iqbal and Marina Iqbal, considered on-field performances in the National Triangular T20 Women’s Cricket Championship, played from 22 November until 1 December in Rawalpindi, along with form and fitness of the players in the High Performance and probables camp while finalising the squad.

“Our last tour to South Africa in 2018 produced high-quality cricket and we are looking forward to yet another competitive tour.” – Urooj Mumtaz, chair of the Pakistan National Women Selection Committee.

Ayesha Zafar, Kainat Imtiaz, Nahida Khan and Nashra Sandhu return to the women’s national team for the tour in which they will play the hosts in three ODIs and as many T20Is.

Nahida Khan finished the National Triangular T20 Women’s Cricket Championship as the leading run-scorer with 154 runs at an average above 51 from her four outings. Her PCB Dynamites teammate Ayesha Zafar was the fourth best batter in the tournament with 111 runs.

All-rounder Kainat Imtiaz was awarded player of the tournament award as she scored 111 runs from four outings, getting dismissed once, and took three wickets, while left-arm spinner Nashra Sandhu finished as the joint leading wicket-taker in the tournament with four wickets at 25.

“Selecting a squad is never a stroll in the park, and naming 17 players for this tour was no different.” – Urooj Mumtaz

When the team takes the field for the first one-dayer at Kingsmead Stadium, Durban, on 20 January, it will mark their return to international cricket after over 10 months due to the Covid-19-enforced hiatus.

After the second one-dayer at the same venue on 23 January, they will move to Pietermaritzburg where they will play the third ODI on 26 January and first two T20Is on 29 and 31 January.

For the last T20I on 3 February, which will also be the last match of the tour, the team will return to Durban.

Urooj Mumtaz, the chair of national women selection committee: “The squad has been selected after closely observing the players in the recent High Performance and probables camps and the National Triangular T20 Women’s Cricket Championship.

“We have seen significant improvement over the last three months in the intent and mindset of the players and the team is shaping up well for the upcoming series.”

“The squad is well balanced and possesses a good blend of youth and experience for what promises to be an exciting tour.” – Urooj Mumtaz

“Javeria Khan is an experienced campaigner and has the desired understanding of the game which is necessary to lead the national women’s team. She has undertaken this responsibility in the past and I am certain she will rise to the occasion and inspire the players.

“Our last tour to South Africa in 2018 produced high-quality cricket and we are looking forward to yet another competitive tour, which will be instrumental for the new head coach David Hemp as well as in our preparations for the ICC Women’s Cricket World Cup Qualifiers.

“Selecting a squad is never a stroll in the park and naming seventeen players for this tour was no different. David and I have identified key areas of the game where these players must continue to improve. We will be having honest conversations with the players who were unable to make it this time, as they remain an integral part of our plans.”

The 17-player squad will continue to prepare for the tour in the bio-secure environment, which was set up on 20 December for the probables camp, in Karachi before their departure on 11 January.

Photo caption: The PCB has announced a 17-player team for its tour of South Africa, in Durban and Pietermaritzburg, from 10 January to 3 February, 2021. Image: PCB