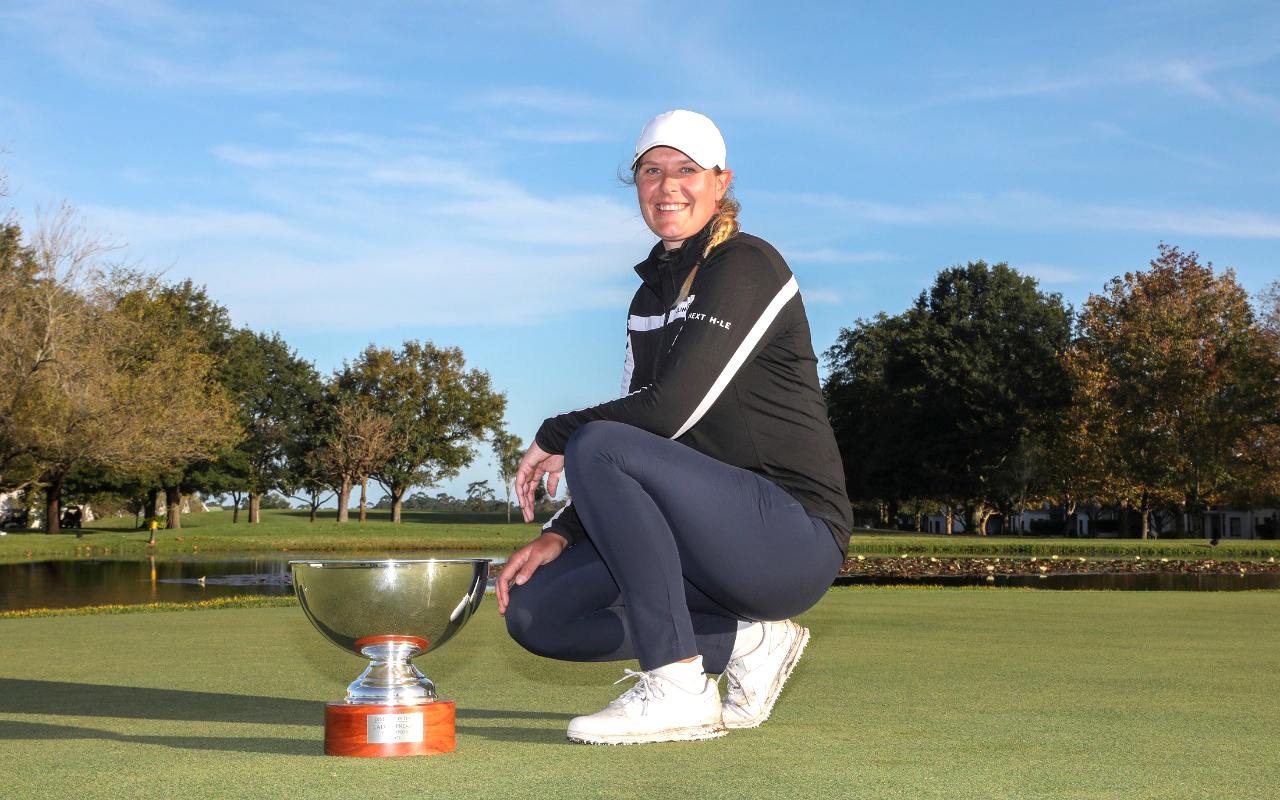 Marianne Skarpnord sealed the Dimension Data Ladies Open title in stunning fashion after a final round 70 gave her the chance to emerge triumphant in a four-way play-off in George.

On a sun-drenched final day in the Sunshine Ladies Tour showpiece on the Montagu Course at Fancourt, the Norwegian clinched her 10th professional title with two massive birdie putts in a dramatic final hour of play.

The first birdie, which came on the 18th in regulation play, left her tied for second on one-under-par 215, alongside reigning Joburg Ladies Open champion Casandra Hall and former winner Lee-Anne Pace.

The second came after the trio watched in astonishment as Germany’s Olivia Cowan threw the trophy in the water.

Cowan, the overnight leader who started the day with a five-shot lead and needed just seven to seal the win, hit a great drive down the 18th and laid up with her second to leave herself a short iron into the island green.

She paid a hefty price for going for the flag when her ball spun off the green into the water. Visibly shaken, Cowan three-putted for a triple bogey 8 and signed for 79, which gave Skarpnord, Hall and Pace another shot at the title in the ensuing sudden death shoot-out.

The quartet headed back to the 18th and this time, all four players were on the dance floor in three.

Skarpnord used her magic wand and hit a birdie putt with perfect pace. The ball caught the edge of the hole and dropped, handing her the win.

“With three other people trying, I had to go for it. I hit a nice wedge and a good putt and here we are.” – Dimension Data Ladies Open title winner, Marianne Skarpnord

The victory at Fancourt was her second on SA soil since she won the South African Women’s Open in 2013, and her first since she banked the Australian Ladies Classic title in 2019 for her fourth Ladies European Tour (LET) win.

“That was not even on the planet for me, to be honest,” said Skarpnord, who began the round seven shots off the pace. She offset three bogeys with a trio of birdies to finish level par for the day.

“I’d been finished for 30 minutes and I was a little stiff, but I was first off and of course, I started with a nice little pull in the trap. I got it out nicely, but I was in the rough with a bit of mud on the ball. With three other people trying, I had to go for it. I hit a nice wedge and a good putt and here we are.

“It was a surprise for me; for all of us really and it’s a shame that it happened this way. I would have loved to see Olivia win. She is a good golfer, but obviously she had a tough day. But her win it not far away. Obviously I am happy to be standing here, but it’s always a bit weird when it happens like that.”

However, it was also a timeous win for the 35-year-old Norwegian.

If Skarpnord can back up the win at Fancourt with another strong performance in the Investec SA Women’s Open at Westlake next week, she will definitely be on the radar of International team captain Catriona Matthews, who will make her Captain’s Picks for the Solheim Cup at the AIG Women’s Open.

“The last few weeks have been amazing. It’s absolutely fantastic to start the season this way. It was completely unexpected, but I couldn’t be happier. I haven’t won for a few years and this has been one of the best weeks on tour and I’ve been on tour for a long time,” said Skarpnord.

Pace had a chance to extend the play-off, but her birdie putt slid just past the hole, while Hall’s effort overshot the cup. But joint second means the South African pair keep their one-two positions on the Investec Order ofMerit heading into the season-finale in Cape Town next week.

SuperSport Ladies Challenge winner Michaela Fletcher, who retired with an injured shoulder in the final round, sits in third on 821.50. Skarpnord overtook Nicole Garcia for fourth with 744 points.

The Investec South African Women’s Open will draw the curtain on the 2021 season.

The event is co-sanctioned with the Ladies European Tour and will also serve as the U.S. Women’s Open qualifier this year. The championship carries a purse of €200 000 and will be contested over 72 holes at Westlake Golf Club from 13-16 May.