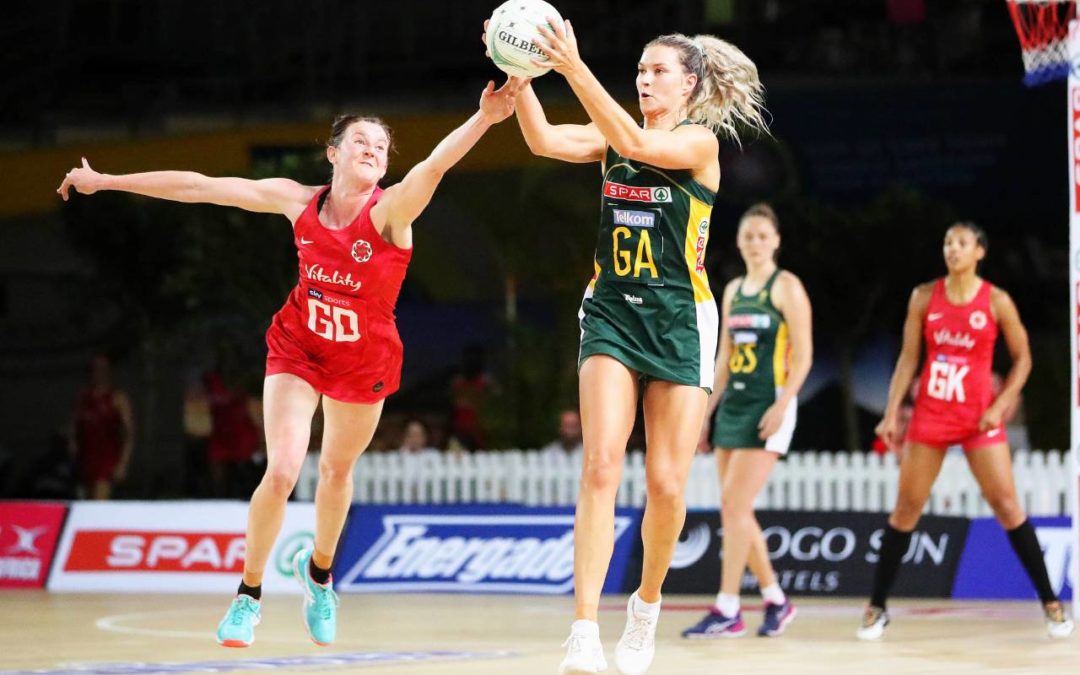 Although Commonwealth Champions England won the series two-one, the South Africans can hold their heads high, after forcing the first Test on Friday into extra time.

The SPAR Proteas, current African Champions, were on fire from the start on Sunday. Five minutes into the match, they were five goals ahead and they kept up the pressure. Phumza Maweni was outstanding as goalkeeper, succeeding with several turnovers. The Vitality Roses appeared slightly bemused by the pace of the South Africans and by the end of the quarter, the SPAR Proteas were 16-10 ahead.

They continued the pressure in the second quarter, but England fought back, and the two teams shared the quarter with 11 goals each. (27-21) Lenize Potgieter appeared to be adapting to her new role of goal attack, with Ine-Mari Venter at goalshooter.

The Vitality Roses continued their fight back in the third quarter and after 10 minutes, were level on 35-all.  But the SPAR Proteas once again stepped up another gear and finished the quarter 41-36 ahead.

In the final quarter, Potgieter returned to her preferred position as goalshooter, with the young Lefebre Rademan as goal attack. The large crowd became increasingly enthusiastic as the game continued, cheering every goal and turnover. The Vitality Roses had no answer as the SPAR Proteas extended their lead, at one stage leading by 10 goals.

“This win will do wonders for our confidence ahead of the Vitality Nations Cup in the United Kingdom in January, when we play England, Jamaica and New Zealand.” SPAR Proteas head coach, Dorette Badenhorst.

Although the Vitality Roses won the last two quarters, by one goal and two goals respectively, the SPAR Proteas had done their work in the first quarter and made it almost impossible for England to come back.

Potgieter, who had 100 per cent accuracy in the first three quarters, was named player of the match and wing defence Shadine van der Merwe the player of the series.

South Africa last beat England in the Quad Series in London earlier this year, although they lost twice to the host nation at the World Cup in Liverpool in July.

“Two-one is much better than three-nil,” said Badenhorst.

“It was a great game between two very good teams. We won the match in the first quarter, because we achieved our goal of getting five goals ahead, which meant that England were playing catch-up.

“It was a great team effort. The players on the court played with heart and had the backing of the bench. They are beginning to trust one another.”

She praised the crowd, which was very vocal in its support.

“In Liverpool, the crowd got behind the Vitality Roses and it was good to have the support behind us today. The more we play at home, and the more people see how good we are, the better for netball,” she said.

“This win will do wonders for our confidence ahead of the Vitality Nations Cup in the United Kingdom in January, when we play England, Jamaica and New Zealand.”

Earlier, the SPAR Baby Proteas wrapped up the series against Lesotho Under-21, beating them 79-22 to win the series three-nil.