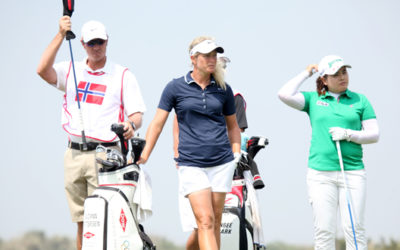 Stacy Bregman and Lee-Anne Pace take South Africa to 13th place tied out of 19 teams contesting the 2013 Mission Hills World Ladies Champs in China earlier today, with Bregman satisfied with her 22nd-place finish in her first outing of the year.

Team SA Steady as She Goes at Mission Hills

Even-par Team SA watch the leaders increase the distance in round two at Mission Hills in tropical Hainan, southern China, on Friday, while Spain’s Carlota Ciganda breaks the course record after shooting a nine-under-par 63 to move from 26th position into the runners-up slot at the tournament’s halfway mark

Round One Promise as Bregman and Pace do SA Proud

Stacy Lee Bregman and Team SA partner Lee-Anne Pace did the country proud on Day 1 of the Mission Hills World Ladies Championship at Mission Hills in China, carding a 142 to finish joint fifth overnight with Norway, one better than defending champions China