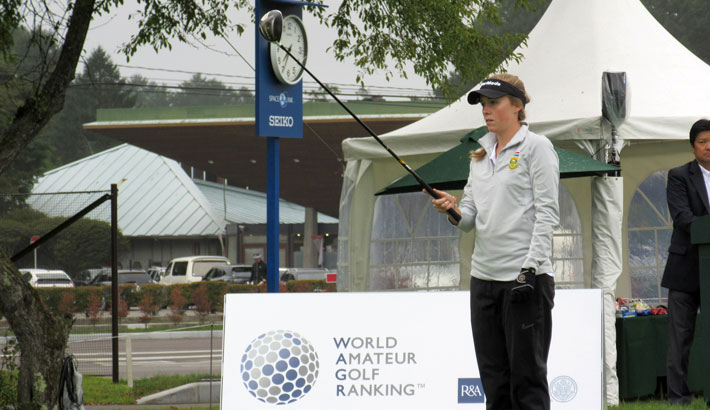 The South African team is in a challenging position after first round action in the Espirito Santo Trophy at the World Amateur Team Championships wrapped up in at the Karuizawa 72 East Golf Club in Japan on Wednesday.

KwaZulu-Natal’s Michaela Fletcher and Cara Gorlei from the Western Province combined for an opening two-under-par 142 at the Oshitate Course to claim a share of seventh alongside Mexico, Spain and United States of America.

Fletcher settled down with pars after a bogey, bogey start and caught fire after the turn, reeling in birdies at the 11th, 13th, 14th, 15th and 18th holes for an opening three-under-par 69.

Gorlei was equally solid with a lone bogey on each nine and a birdie at the 15th to sign for a 73, while Monja Richards from Mpumalangaposted a non-counting 76.

National coach Val Holland was delighted with the team’s performance. “We have three very talented players, and I am proud of the opening act they produced,” Holland said.

“We woke up at 4 am and got going with a gym session, followed by breakfast and our warm-up routine, by which time the girls were champing at the bit to get going.

“Michaela settled quickly after a shaky start and blazed her way around the back nine to put us on the front foot with a 69. Monja had a few unlucky breaks on the greens, but overall, she and Cara played solid golf with very few errors.”

Canada leads the 49 teams competing in the 50th edition of the prestigious event after Brooke Henderson and Augusta James combined for nine under with respective rounds of 66 and 69.

The Republic of Korea is two shots back in second, while France slipped into third at four under.

“I think we are in a very challenging position at seven under, because only three shots separate the rest of the teams in the top 10,” Holland said.

The team will have an early start at 07h30 at the Iriyama Course and hope to close the gap on the frontrunners.

Photo 1 caption: Michaela Fletcher (pictured) combined with Cara Gorlei to give Team South Africa a great boost in the first round of the Espirito Santo Trophy at the World Amateur Team Championships in Japan. Photo: Karen Olivant / WGSA