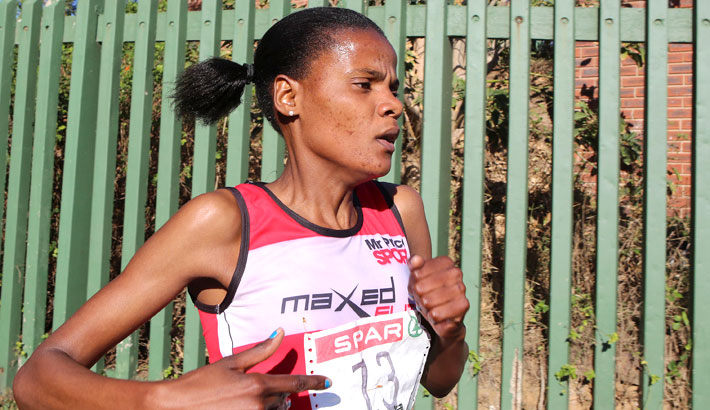 Barefoot runner Diana-Lebo Phalula is getting very excited at the thought of collecting the keys to a brand-new Nissan Micra, as winner of the 2014 SPAR Grand Prix.

“I don’t have just one hand on the key – I’ve got it in my back pocket,” laughed Phalula. “I’m really looking forward to winning that car, because I’m tired of being a pedestrian.”

With just one race left to run in the five-race SPAR Women’s 10km Challenge series, Phalula has an almost unbeatable lead.

She won the first two races, in Cape Town and Port Elizabeth, in record time, and top four finishes in the Durban and Pretoria races, she has a total of 94 points, 28 ahead of her nearest rival, three-times Grand Prix winner Rene Kalmer, who has 66 points.

Phalula ran the Durban and Pretoria races with a strained hamstring, but she hopes to have recovered by the Johannesburg Challenge at the Wanderers Club on October 12.

While her position is virtually insurmountable, there is close competition for the second prize of R30 000.

Kalmer, who finished eighth in Cape Town, second in Port Elizabeth, third in Durban and fifth in Pretoria, is just two points ahead of last year’s Grand Prix winner, Mapaseka Makhanya, who has 64 points.

Phalula’s twin sister, Lebogang, who won the Durban race and finished third in Pretoria, and Irvette van Zyl, who won in Pretoria in a course record time, are in joint fourth position, with 57 points.

Two-times Grand Prix winner Van Zyl, who missed the Cape Town race because of a long-term injury, had a golden weekend, winning the Pretoria Challenge on Saturday afternoon and then going on to win the Mandela Marathon in Kwa-Zulu Natal on Sunday, with record times in both events, and she has sent a strong signal to Kalmer, Makhanya and Lebogang Phalula that she is the one to beat if they hope to claim that second prize.

In the club competition, Boxer heads the table with 214 points, ahead of Nedbank, with 161 and Transnet with 108.

Photo 1 caption: Despite finishing fourth in the Pretoria SPAR Women’s challenge on Saturday, Diana-Lebo Phalula still remains top and probably out of reach of the other runners contesting the 2014 SPAR Grand Prix leader board. With just one SPAR women’s challenge race left for 2014, from the Wanderers Club in Illovo on 12 October, Phalula is keen for a fast finish to ensure her prize. Photo: Reg Caldecott