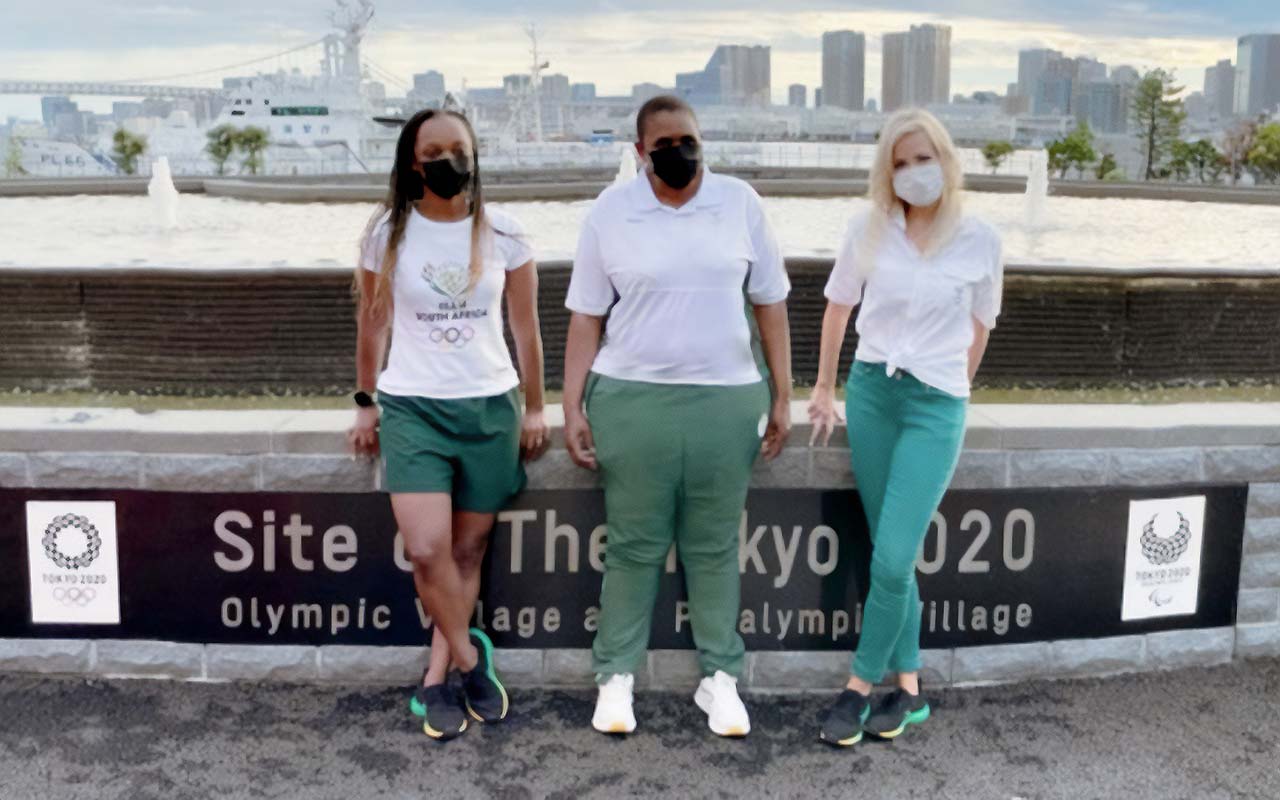 There’s a popular expression which says, “If you want a job done properly then give the task to a woman”. That could be applied to Team SA at the Tokyo 2020 Olympics as the curtain comes down on what was a highly successful campaign for women.

The team’s fate was in good hands on and off the field of play in what was a unique Olympics and one which went ahead in the most trying of circumstances given the Covid-19 pandemic and the restrictions and regulations relating to the Playbook protocols.

Behind the scenes though things ticked over like clockwork. At the heart of Team SA’s backroom management was Chef de Mission, Patience Shikwambana, Chief Medical Officer, Dr Phatho Zondi and Head of Media, Bronwyn Roets.

All three reflected on what was, at times, a challenging experience.

“In 2012 I became the first African Black woman to be Chef de Mission for South Africa at an Olympics,” said Shikwambana.

“It’s something I’m proud of and it was again an honour and a privilege to have the title here at Tokyo 2020.

“The women of Team SA have taken the lead at Tokyo. We had our medals won by Tatjana Schoenmaker and Bianca Buitendag and there has been a strong and influential presence of women right through the management team. A fine job has been done and if everyone is moving forward together, then success takes care of itself,” Shikwambana added.

Dr Zondi has also put in a great deal of work: “Our work started long before the Tokyo Olympics got under way,” she said.

“It has, at times, been incredibly challenging managing the protocol related to Covid-19 and the Playbook, while still ensuring we meet all other clinical needs of our team. A huge thank you to the entire medical staff, which includes the team of physiotherapists and doctors who have worked tirelessly throughout. I’m thankful that Team South Africa has come through stronger, together.”

Roets managed the Media with aplomb: “We had a relatively small team but we managed to service South Africa’s needs.

“We were able to conduct many radio and TV interviews for both local and internationally-based media.

“It was an honour working with my fellow Team SA members and proud that we pulled it off under such testing conditions.”

1: This is the first time in South Africa’s Olympic history that women won ALL the country’s medals at the Games. Tatjana Schoenmaker (2) and Bianca Buitendag won the medals.

2: Tatjana Schoenmaker broke the only women’s individual swimming world record in the pool, in the women’s 200m breaststroke when taking the gold medal. Caleb Dressel, the USA superstar, was the only other swimmer to break an individual world record.

3: On a management side, TeamSA was led by a woman in Patience Shikwambana and the chief medical officer and media lead, Dr Phatho Zondi and Bronwyn Roets, respectively, were women.

4: South African waterpolo was represented for the first time in the Olympic women’s competition.

5: The South African woman’s waterpolo coach, Delaine Mentoor, became the first woman’s water polo coach in Olympic history. Every other country’s head coach has been a male up to this point.

6: The youngest person on TeamSA at the Tokyo Olympics was a woman, Boipelo Awuah, who is still only 15. She was chosen to represent at skateboarding but was injured before the competition.

7: South Africa’s Michelle Joubert had the honour of being selected as an umpire in the women’s bronze medal hockey match between Great Britain and India.

8: The artistic swimming duet of Clarissa Johnston and Laura Strugnell were representing South Africa in their sport in the Olympics for the first time since 1992. They broke the South African record in attaining 72.1667 points in the free routine preliminary – the first time over 70 points have been scored by South Africa.