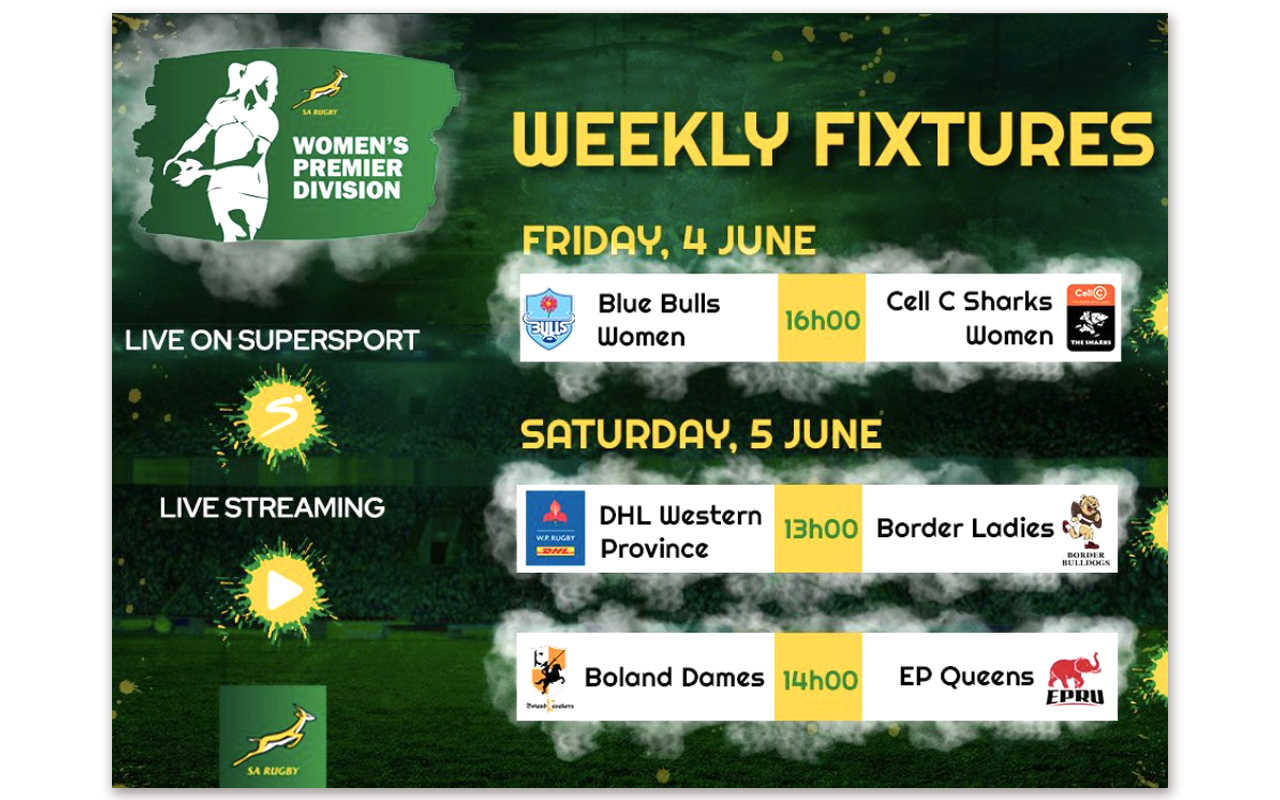 The Women’s Premier Division will strike the halfway mark in dramatic fashion this weekend as the competition pace-setters, Border Ladies and DHL Western Province, meet in a repeat of the 2019 final where both teams’ unbeaten status will be on the line.

The showdown between these arch-rivals will take centre stage in a bumper round, which kicks off on Friday afternoon with the Blue Bulls Women hosting the Cell C Sharks Women in Pretoria. This clash will be broadcast live on SuperSport (16h00).

Saturday’s action will see defending champions, DHL Western Province, hosting the Border Ladies in a top-of-the-table clash in Cape Town (13h00), and the Boland Dames welcoming the EP Queens to Wellington (14h00), with these matches being streamed live on Springboks.rugby.

In Pretoria, the Blue Bulls Women will be determined to build on their first victory of the season last week when they cross paths with the Cell C Sharks Women, who are hurting from back-to-back defeats in which they failed to score any points.

While the Durbanites have been slightly better on defence than the women from the Highveld, they have been less effective on attack, which is an area they will be determined to improve on as the competition heats up.

Interestingly, the Cell C Sharks Women won the last two matches between the teams, which will inspire them going into the clash.

The match-up between DHL Western Province and the Border Ladies is expected to be epic given the teams’ impressive form this season and the history between them, which has seen them battle it out in every final since the 2016 season.

The team from East London hold a slender one-point lead on the standings after both sides got their campaigns off to firing starts with four victories in a row. But this could come to dramatic halt for one of them on Saturday.

While the sides have been closely matched on defence with DHL Western Province conceding two points fewer, the Capetonians have also been in superior form on attack, boasting 32 more points in their opening four matches.

DHL Western Province will enter the match with confidence after registering victories in the last three matches between the sides – two of which were finals – and a favourable track record of four wins in their last six outings.

The Boland Dames and EP Queens will both look to bounce back from defeats when they take the field in Wellington.

The visitors, however, will have to step up their defence in particular to achieve this feat, as that area of their game has been a cause for concern, although their attack has been marginally better than the opposition in the opening rounds.

In their last outing against the Bolanders, the EP Queens walked away with a rewarding 36-0 victory in Wellington.

Click on the image to review the latest tournament standings:

Photo 1 Caption: The Women’s Premier Division will strike the halfway mark in dramatic fashion this weekend as the competition pace-setters, Border Ladies and DHL Western Province, meet in a repeat of the 2019 final where both teams’ unbeaten status will be on the line. Photo: WomenBoks (Twitter)