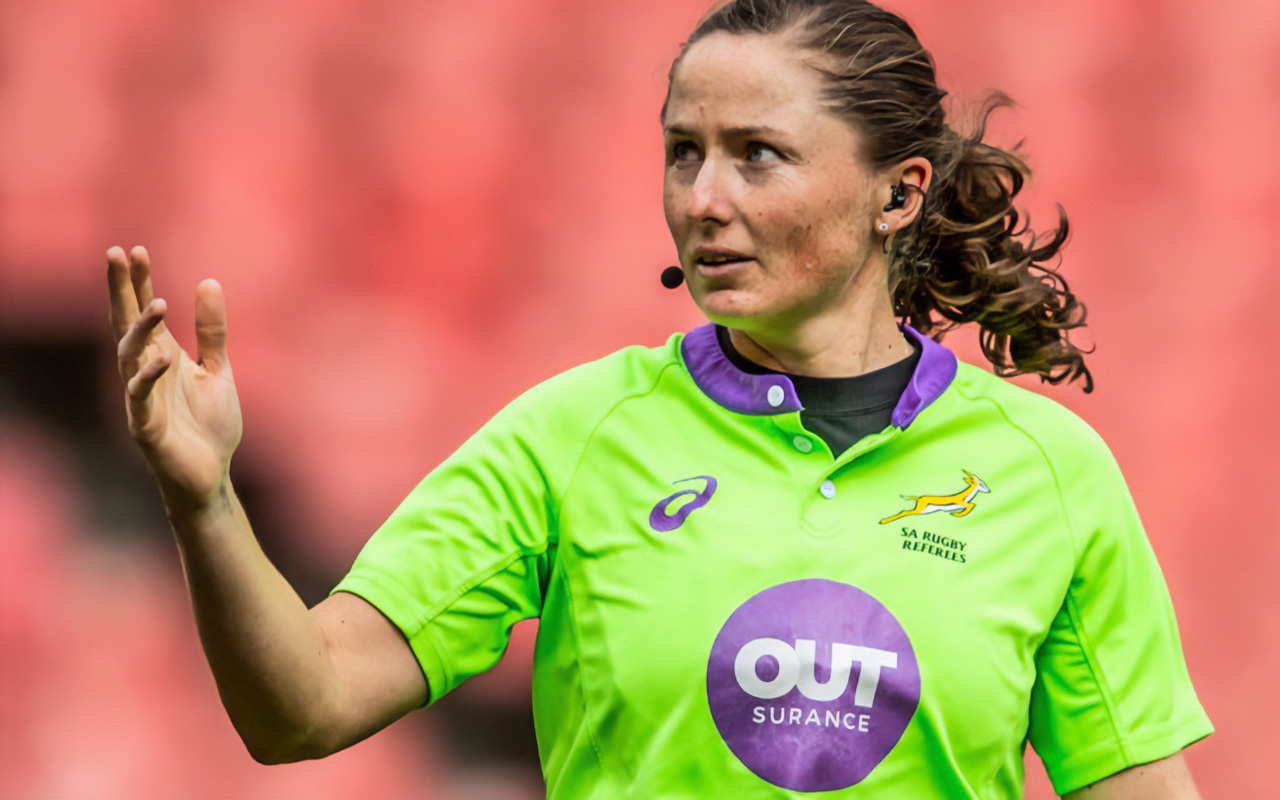 Five years after her first refereeing appearance at a Rugby World Cup, Aimee Barrett-Theron will do so again later this season in New Zealand after being included on an 18-member match official panel for the global showpiece from 8 October to 12 November 2022.

Barrett-Theron, the only South African on the panel, is one of nine referees for the Rugby World Cup 2021 (playing in 2022). The other nine match officials on the panel will share assistant referee and TMO duties.

Barrett-Theron’s selection marks another significant milestone in her refereeing career, which has flourished in recent years. Apart from taking the whistle in the Carling Currie Cup and Vodacom United Rugby Championship, she has also officiated at the 2016 Rio Olympic Games, the HSBC World Rugby Sevens Series, the Women’s Six Nations and the Rugby World Cup Qualifiers.

“We are very proud of Aimee and how she has only progressed in her refereeing career over the last few years.” –  Mark Alexander, President, SA Rugby

“I would like to congratulate her on this remarkable achievement,” said Alexander.

“Only the best referees in the world are selected to officiate at the Rugby World Cup, and the fact that Aimee has consistently featured on various international and national panels in the last seven seasons is a testament of the high quality of her refereeing.

“She been an inspiration to all women’s referees in the country, and we wish her luck for her second World Cup”.

“It is the prestige event with the best of the best teams in action, and the quality of women’s rugby at the moment is amazing and it’s going to be a privilege to be a part of it all!” – Aimee Barrett-Theron

“I was very fortunate to go to the 2017 event in Ireland, but I was very much a rookie at that stage. I learnt so much from that, but with the support of SA Rugby and World Rugby, I’ve gained a lot of experience over the last couple of years, and I can’t wait to implement that later this year.”

“Fifteen of the 18 match officials selected being female not only demonstrates the strength and depth of elite level match officials across the globe, but also the commitment that World Rugby and its member unions have made to developing women in rugby and increasing the visibility of females within our sport across multiple pathways.

“Rugby World Cup 2021 promises to be an exceptional celebration of women’s rugby and we wish the team of match officials the very best for their final months of preparation.”

World Rugby Referee Talent Development Manager, Alhambra Nievas, added: “After a comprehensive process we are delighted to be able to confirm the team of match officials for Rugby World Cup 2021. Selection followed a rigorous process that was based on merit and form, and with such strength and depth in the pool of match officials we are fortunate to work with, selecting a final team of 18 was not easy. I’d like to personally congratulate everyone on their selection and thank all of those involved in the process.

“We have been working hard to foster a strong team ethic among the group; something that is just as important for match officials as it is for players. Trust and cohesion are vital, and we look forward to seeing the hard work pay off on the field of play in New Zealand.”

The Springbok Women will make their first appearance at a RWC since 2014 in their Pool C opener against France at Eden Park in Auckland on Saturday 18 September, at 04h15 (SA time).

This will be followed by matches against England – the No 1 team in the world – on Thursday, 23 September, at 09h15 at the Northland Events Centre in Whangarei, and Fiji on Tuesday, 28 September, at the Waitakere Stadium in Auckland at 05h45.

Photo 1 Caption: South African rugby referee Barrett-Theron has been selected by World Rugby as the only South African on its panel of nine referees for the Rugby World Cup 2021 in New Zealand (playing in 2022), starting this October. Photo: @WomenBoks on Twitter