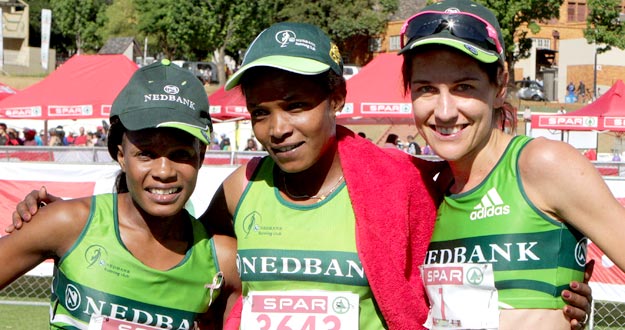 Ethiopian Gezashigh Hunduma Gemeda, running in the Nedbank colours, romped to victory in the SPAR Women’s 10km Challenge at the Wanderers Club in Johannesburg on Sunday in a time of 33.49 minutes.

Running on the new route through some of Johannesburg’s leafy northern suburbs, Nyahora took the early lead, but the Ethiopian, who arrived in South Africa on Saturday, surged to the front after three kilometres, and retained her lead for the rest of the race.

“It was a lovely race – I liked the route and I enjoyed the atmosphere,” said Gemeda.

Kalmer said she had an awesome race. “It feels good to be running injury free again, and I was feeling very good. I didn’t know what to expect from Gezashigh, because I haven’t run against her before, but I tried my very best and I am pleased with the way I ran,” she said.

“I feel I am back in the swing of things, and I am looking forward to next year,” said Kalmer

“It is slightly bitter-sweet to lose to a foreigner running in my own club colours, but it is always good to test yourself against world class runners,” said Kalmer.

Nyahora, who won the first two races in the 2013 Challenge Series, said she was happy to be back in the top three in the race. “I finished fourth in Pretoria, so it was nice to feel I was back again. Third place was a victory for me.”

The leader on the SPAR Grand Prix ladder, Mapaseka Makhanya in Transnet team colours, who won the Durban and Pretoria legs of the series, finished outside the top 10, but she had built up such a substantial lead that she will still receive the keys to the Nissan Micra presented to the overall Grand Prix winner.

What a great way to end the season. Holiday Mauritius here I come?

Irvette van Zyl, who was the only runner who stood a statistical chance at overtaking her, was unable to run on Sunday because of a knee injury.

So I am out of Spar Ladies JHB on Sunday. Have a torn meniscus. Going for an op on Monday. Bad timing #heartbroken

Nearly 11 000 women took part in the 10km Challenge and the 5km Fun Run, which meant the designated charity, Reach for Recovery, which is a support group for breast cancer patients, received a substantial cheque. Race organisers received positive feedback on the new route: “There was one section after Killarney where we ran through a grove of trees, it was so beautiful. A great route.”