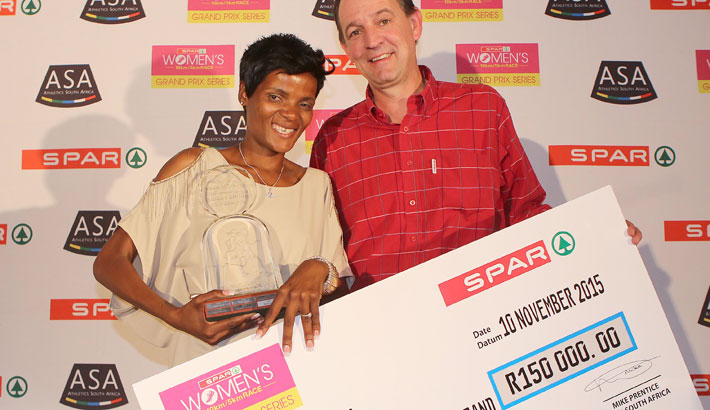 The Phalula sisters, Lebogang and Diana-Lebo, took top honours in the 2015 SPAR Grand Prix, with Lebogang the runaway winner of the award, and her twin the runner-up.

Lebogang has had a spectacular year on the road, notching up victory after victory, winning in Durban and Johannesburg, and finishing in the top three in Cape Town, Port Elizabeth and Pretoria, racking up an impressive total of 95 points to ensure that she walked away with the prize of R150 000.

Lebogang was overjoyed at winning the prestigious Grand Prix title. “I have had to work hard to get back to the top after being suspended for using a banned substance,” she said.

“I wanted to prove that I could do it, and that I wasn’t a cheat. Winning the Grand Prix means so much to me. My sister won it last year, and I decided this year was going to be my year.”

Her twin, who won the title in 2014, finished in second position, with 75 points, for prize money of R50,000. Diana-Lebo won the Grand Prix in 2014, and her sister made it clear then that she intended to win the title this year.

Another previous Grand Prix winner, Mapaseka Makhanya equalled Nolene Conrad’s 67 points to finish joint third, and they will take home R27,500 each. They were closely followed by Cornelia Joubert, with 65 points.

Three times Grand Prix winner Rene Kalmer was sixth, with 58 points, and her sister, Christine, was seventh, with 53.

Diana-Lebo, who missed the Cape Town race because she was doing national duty at the World Cross-Country Championships in China, said she and her sister would share their winnings.

“We have shared the car that I won last year, and we will also share our prize money. We are each other’s biggest fans, and we share everything. I am very happy for Lebogang, but I’ve told her to watch out – it’s my turn next year.”

The twins said they would focus on trying to qualify for the Olympic Games in Rio de Janeiro next year. Lebogang will be aiming for the 1500 and 5000m events, while Diana-Lebo is still trying to decide whether she wants to stay on the track or aim for the marathon.

Another former Grand Prix winner, Irvette van Zyl, showed she is still a force to be reckoned with, after she finished ninth, with 39 points. Van Zyl ran three races while pregnant, and she came 11th in the Johannesburg race, only five weeks after giving birth to her son Louis.

“Next year I will be back with a vengeance,” she said. “I want to start winning SPAR races again, and I am also going to try to qualify for the 10,000m at the Olympic Games.”

SPAR Marketing Executive Mike Prentice said the Grand Prix awards had become one of the supermarket giant’s most important sponsorships. “The Grand Prix will be 10 years old next year, and it has gone from strength to strength.

“We are thrilled at the way the runners have responded to the series, and we are delighted that so many of the top runners and clubs try to compete in as many of the SPAR races as possible.

“Our Challenge races are all about the thousands of women who take to the streets every year, but the elite runners give the races credibility as major events on the road-running calendar,” said Prentice.

Photo 2 caption: Phalula smiles after taking hold of her 2015 SPAR Grand Prix Awards trophy on Tuesday, saying: “I wanted to prove that I could do it. Winning the Grand Prix means so much to me.” Photo: Reg Caldecott