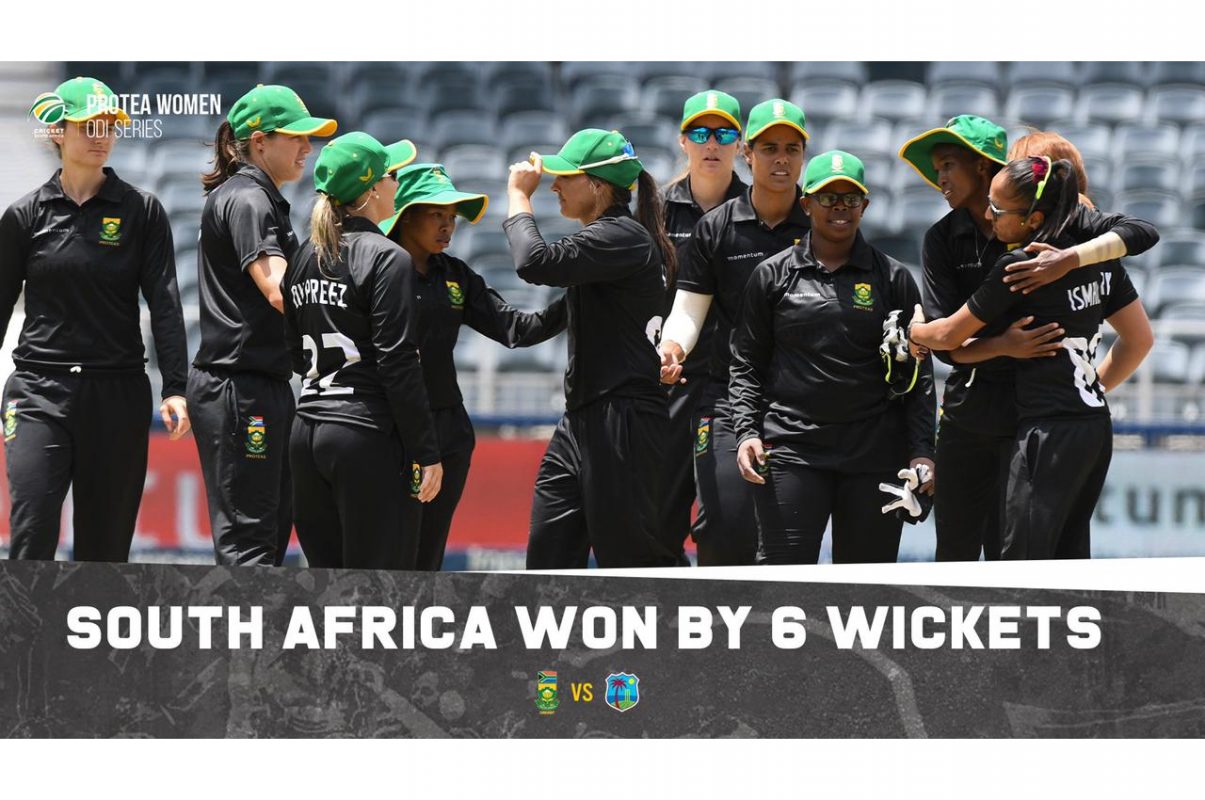 The Momentum Proteas earned a comprehensive six-wicket victory in the fourth and final One-Day International to claim a 2-1 series victory over West Indies at Imperial Wanderers Stadium on Sunday, 6 February 2022.

The South Africans pitched up in their black kit for #BlackDay as they took a stance against Racism and Gender Based Violence.

Going into the match, head coach Hilton Moreeng made two changes to the starting line up with Andrie Steyn, Trisha Chetty and Tumi Sekhukhune coming in for Anneke Bosch, Sinalo Jafta and Raisibe Ntosakhe.

The visitors won the toss and elected to bat first, but lost their first wicket in 4.4 overs when Shabnim Ismail dismissed Rashada Williams for 6(15).

The world class Deandra Dottin and Kycia Knight put on a 65-run partnership for the Caribbean side, before Dottin was dismissed by Ismail for 36 (63).

The flood gates opened as Laura Wolvaardt took a stunner of a catch to send Hayley Matthews to the stands off the bowling of Tumi Sekhukhune.

West Indies found the going tough as they battled to maintain a steady partnership and get runs on the scoreboard.

Knight fell two runs short of a fighting half century as she was dismissed on 48 (76) off the bowling of Chloé Tryon.

Ayabonga Khaka stood tall once in the bowling unit as she took two wickets to add to her tally.

With just 175 to win, the South Africans got off to a good start with Laura Wolvaardt and Tazmin Brits putting on a 38-run partnership before Wolvaardt was dismissed for 23 (33 balls) off the bowling of Aaliyah Alleyne.

The Proteas lost 2 wickets in 2.5 overs before Andrie Steyn and Captain Suné Luus steady the ship with an 88-run partnership that kept the hope of winning the series alive.

Luus was trapped LBW by the Captain Anisa Mohammed for 47 (80 balls) three runs short of a what would have been a well-played half century in the 44th over.

Steyn reached her fifth ODI half century. She was unfortunately bowled by Mohammed for 52 (73 balls) in 36.3 overs, with the Proteas needing just 25 runs to win.