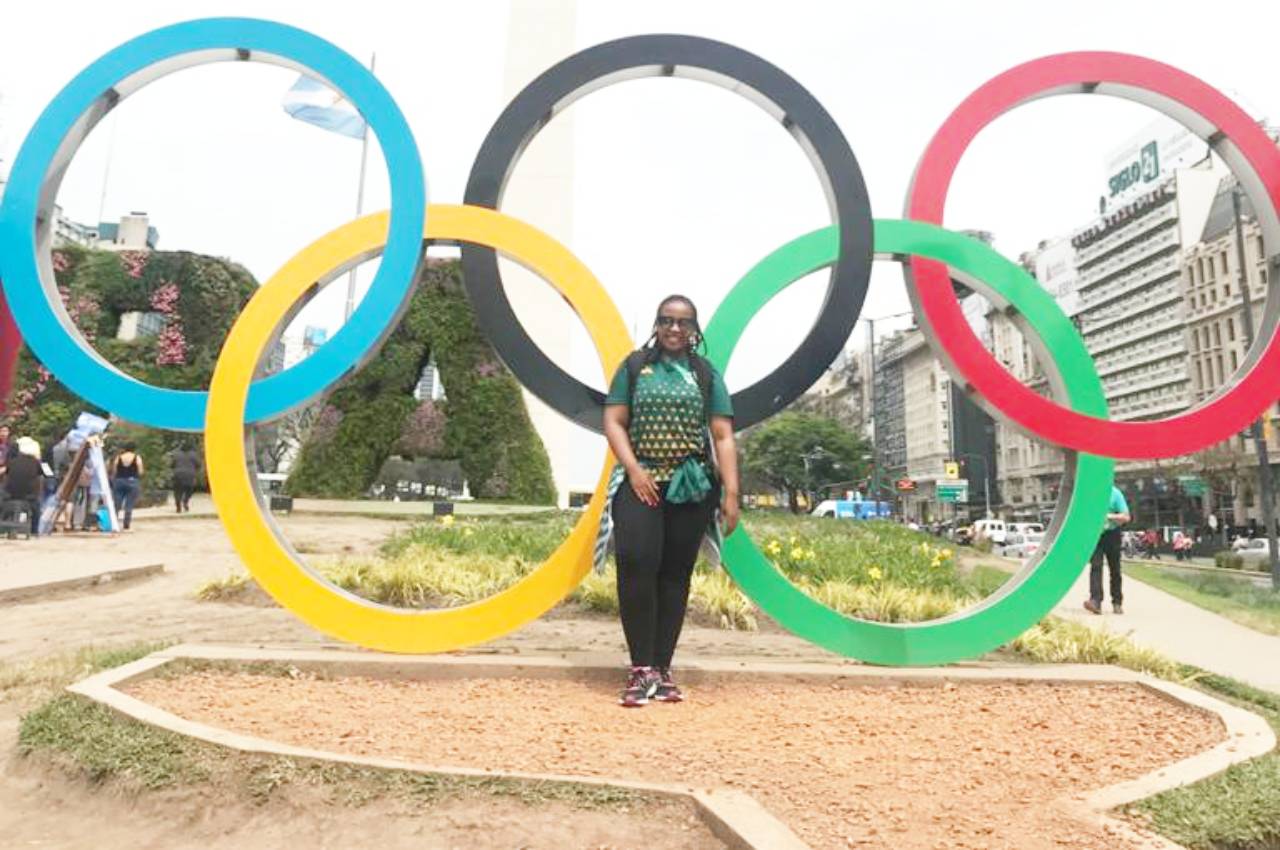 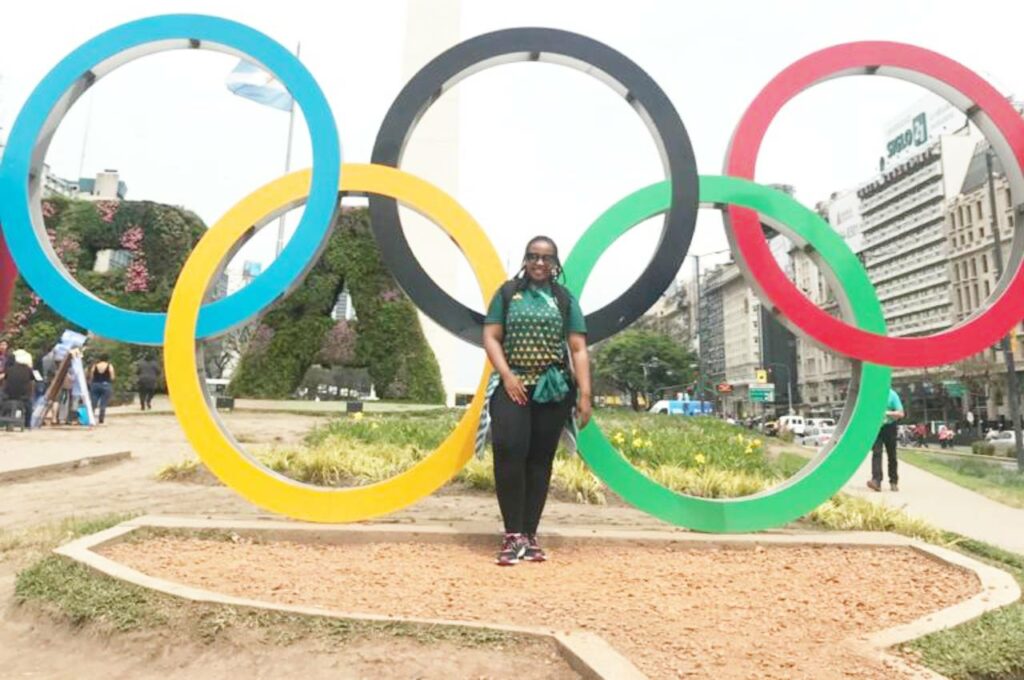 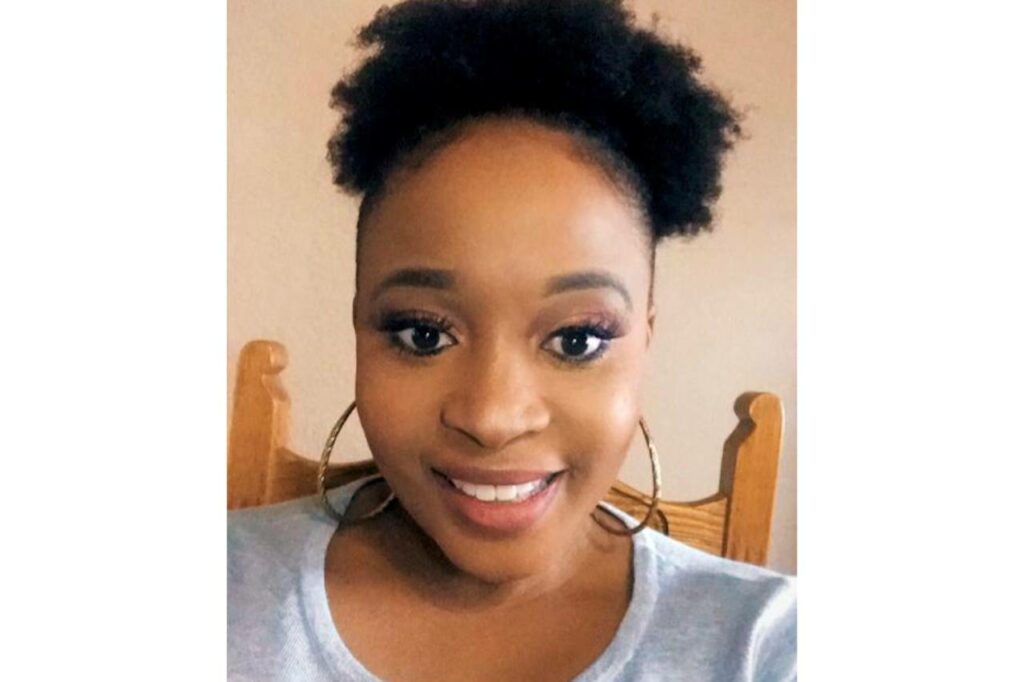 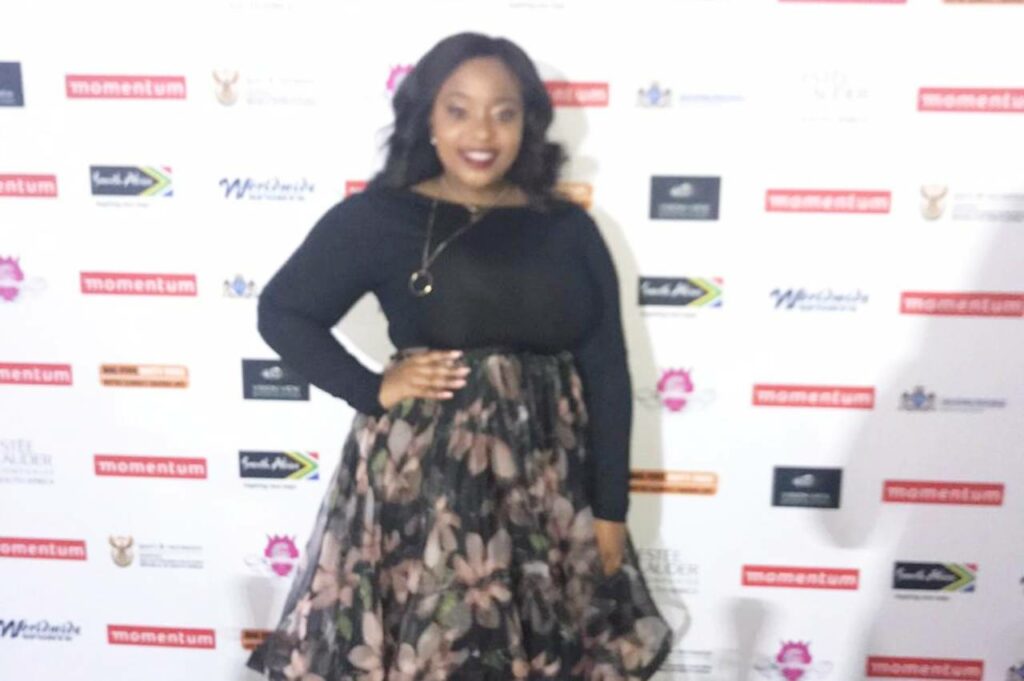 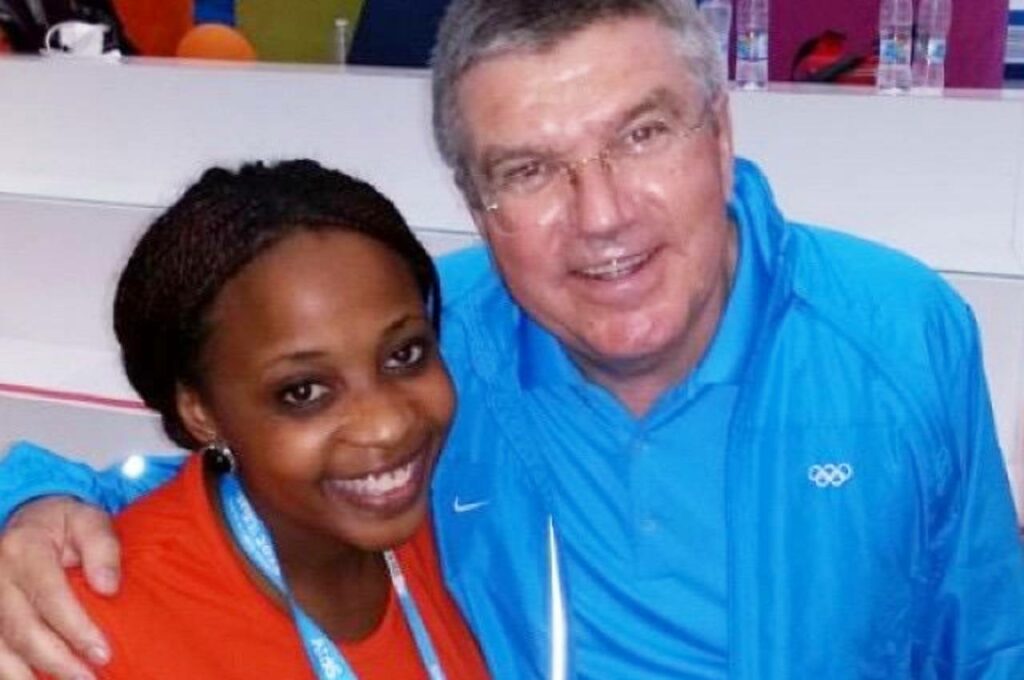 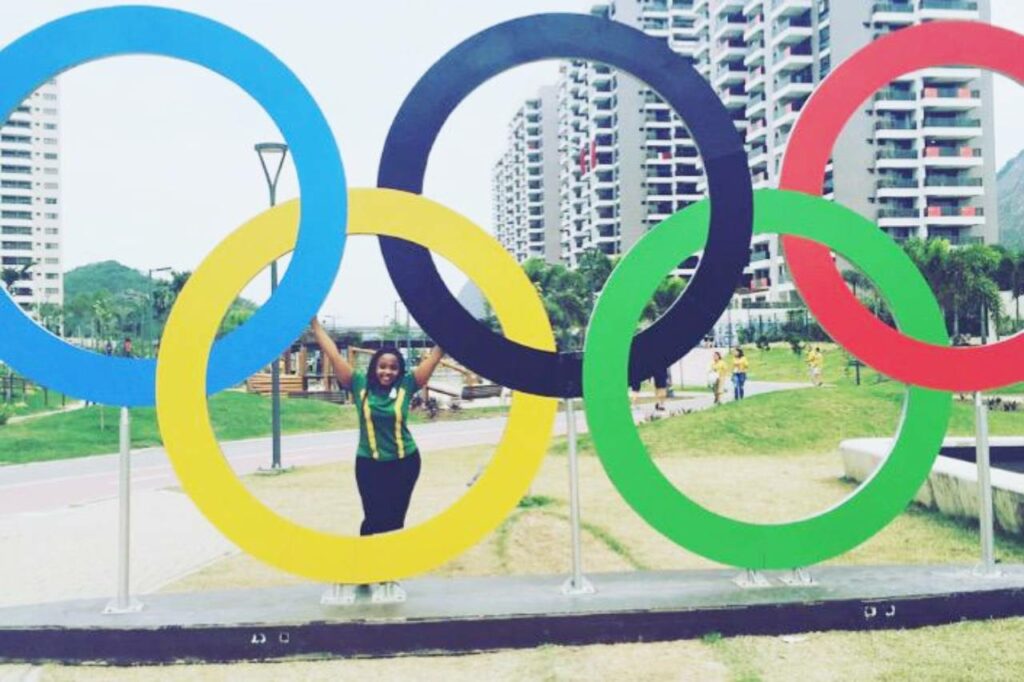 Reabetswe Mpete’s passion for sport has seen her work closely with South Africa’s athletes in her five years at the South African Sports Confederation and Olympic Committee (SASCOC) and gain valuable experience with the Youth Olympics, as she dreams of one day opening her own management agency.

Growing up in the Eastern Cape, Mpete’s family was grounded in the province’s tradition of supporting rugby, tennis and cricket, and she was introduced to sport at a young age.

When she was three, her parents enrolled her into swimming and she also began playing hockey in Grade one until injury struck and her career came to an abrupt end in high school.

She was not going to let her setback deter her from pursuing a career in sport and turned to writing and became the sub-editor of the sports section of her high school newspaper.

Once she matriculated, she became Head of the Sport Portfolio while studying at University of Johannesburg and when she got to her Honours year, she worked with the Sports Bureau on various events and projects.

To date, Mpete has worked on SASCOC’s Operation Excellence (OPEX) program with the Olympic Elite Athletes but admits that working with the Youth Olympics team holds a special place in her heart.

Speaking with Celine Abrahams, Mpete chats about the lessons that she has learnt along the way and what South Africa needs to do to develop more athletes in the country.

Rabi, these past few months have been interesting times, especially working in sport and in media. How has this time impacted on your work?

These current times have not been the easiest at all, but our goal has always been to put athletes first. In doing so, I went back to my Youth Olympics family and decided to host live chats with former Olympians who had ties with the Youth Olympics to inspire and motivate all the athletes who were stuck around the world in different levels of lockdown and restrictions.

What did you have to do differently when it came to you putting out content?

I had to tap into the personal side of the athletes that I was interviewing and chatting with; this was a way to get the athletes who tune in to the Lives on Instagram to personally connect with the professional athletes who shared their experiences and motivations through COVID-19 lockdowns and restrictions

How have you been able to keep yourself motivated?

I have been meditating and going on walks to keep my mind clear while working with professional athletes whose drive and motivation to get back to training has kept me motivated.

I come from a sporting family who loved to play and watch rugby, tennis and cricket a true Eastern Cape tradition. My parents put me into swimming at the age of 3 and I started playing field hockey in Grade 1 and played until I got injured in Grade 10.

What is it about sports that intrigues you?

“The best is watching an athlete coming out of the blocks later than others but still coming out on the podium. The fire and the drive to make it to the top and the mental strength is what intrigues me most about sports.” – SASCOC General Team Manager, Reabetswe Mpete

This is such a tough question for me to answer since I love every aspect of sports. But what intrigues me and keeps the fire burning is the drive to keep going. You could be losing the game and come back to win the game by 2 goals, or you could learn about yourself and how you can lead your peers to winning a tournament. The best is watching an athlete coming out of the blocks later than others but still coming out on the podium. The fire and the drive to make it to the top and the mental strength is what intrigues me most about sports.

Please tell us about your journey so far.

Wow, what a journey it has been for me! My journey started in school as an athlete and when I stopped being an athlete I turned to writing and became the sub-editor of the sports section of my High School newspaper. Once I matriculated, I was part of the University structure as the Head of the Sport Portfolio for my Day House at the University of Johannesburg. Once I got to my honours year I worked with the Sports Bureau on different events and projects. I am now currently working for SASCOC and have been working for them for 5 years.

What are you enjoying the most working with SASCOC and on the Youth Olympics?

Now coming full circle having been the (Young Ambassador), now known as Young Change-Maker for the 2014 Summer Youth Olympic Games in Nanjing, China for Team South Africa and then being a part of the management team for Team South Africa at the 2018 Youth Olympic in Buenos Aires was a highlight of my career. I have a great relationship with the IOC Youth Olympics team and they gave me the platform to host Instagram live interviews over the past few weeks with the aim of getting athletes to stay positive over this time and to #StayActive.

What are your views on youth sports and the direction that is being taken to give our up and coming athletes a platform to show their talents?

I believe that we as a country have only scratched the surface of the talent that we have in our country. My view is that as a country all sporting codes should have more “Craven Weeks” for the consistent development and chain of continuation for our youth.

“Changes need to come from all of us the experienced, privileged, qualified and those sports professionals who were lucky enough to be exposed to these sports at a young age.” – Mpete speaks about the changes that need to be done to allow young athletes in every sphere of the country to be exposed to various sporting codes.

Not all of our youth are exposed to all the sports that our country excels in, but this should not be the case in 2020. Changes need to come from all of us the experienced, privileged, qualified and those sports professionals who were lucky enough to be exposed to these sports at a young age.

What are some of the challenges that you have faced so far in your career?

I have faced criticism and being undermined because of my gender, my race and the assumption that I am not qualified or knowledgeable/well versed and experienced in High Performance Sport, Sport Management or Sports Marketing/Communication. These are challenges that I have faced and overcome.

What lessons have you learnt along the way?

DON’T GIVE UP! It will be hard, and it will feel like you may be on the wrong path but trust your gut, passion and knowledge of what you are doing. Being led by your passion will help you to the making the right decisions.

What are some of your highlights in your career?

In the next five years, what state would you like to see women’s sport in?

In the next five years I would love to see every South African women’s team being contracted and paid by their national federation and have professional leagues for all women’s sports with a clear pathway for continuous growth and succession of women in sport.

In the next few years, I will be opening up my own management agency that focuses on nurturing athletes’ talents on and off the field with the motto of Athletes First!

Photo 1 Caption: Reabetswe Mpete’s passion for sports and nurturing athletes’ talents has seen her spend five years working with SASCOC, playing an integral part in the Youth Olympics and she is planning to open her own management agency soon. Photo: Supplied

Photo 2 Caption: Growing up in the Eastern Cape, Mpete was introduced to sport from a young age as her family were grounded in the province’s tradition of supporting rugby, tennis and cricket. Photo: Supplied

Photo 3 Caption: At the age of 3, her parents enrolled her into swimming and she also began playing hockey in Grade 1 until injury struck and her career came to an abrupt end in High School. Photo: Supplied

Photo 4 Caption: She was not going to let her setback deter her from pursuing a career in sport and turned to writing and became the sub-editor of the sports section of my High School newspaper. Photo: Supplied

Photo 5 Caption: Once she matriculated, she became Head of the Sport Portfolio while studying at University of Johannesburg and when she got to her Honours year, she worked with the Sports Bureau on different events and projects. Photo: Supplied