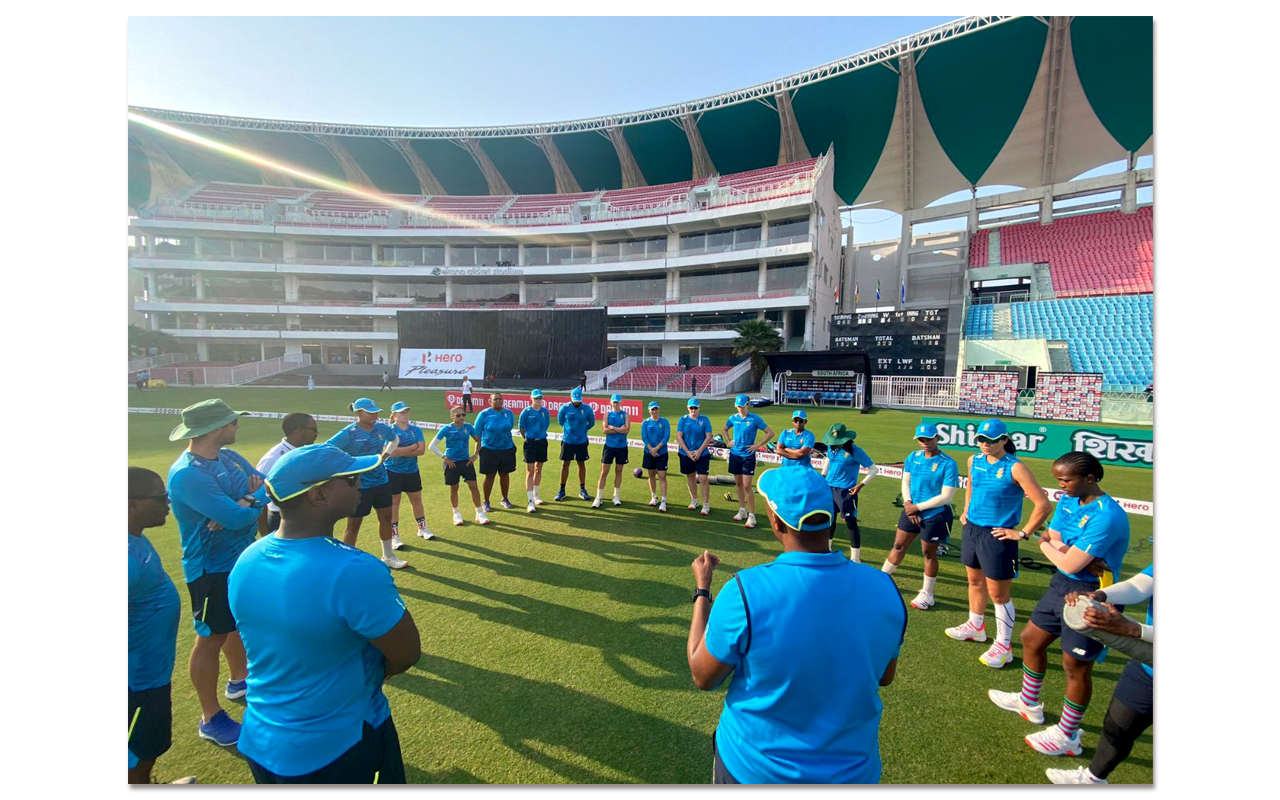 The Momentum Proteas are being lauded around the cricket world after they chased down their highest-ever total in 50 over cricket to win their first ODI series in India since 2014.

Injured SA captain, Dané van Niekerk – who was ruled out of the Indian tour due to injury – took to Instagram to laud her team in an emotional post.

She congratulated Suné Luus for leading the team with passion in her absence, and also lauded Laura Wolvaardt for stepping up when Luus was ruled out of action in the third and fourth matches.

Van Niekerk described the victory as a “collective and satisfying series win” and said glowing things about stars from both India and South Africa. 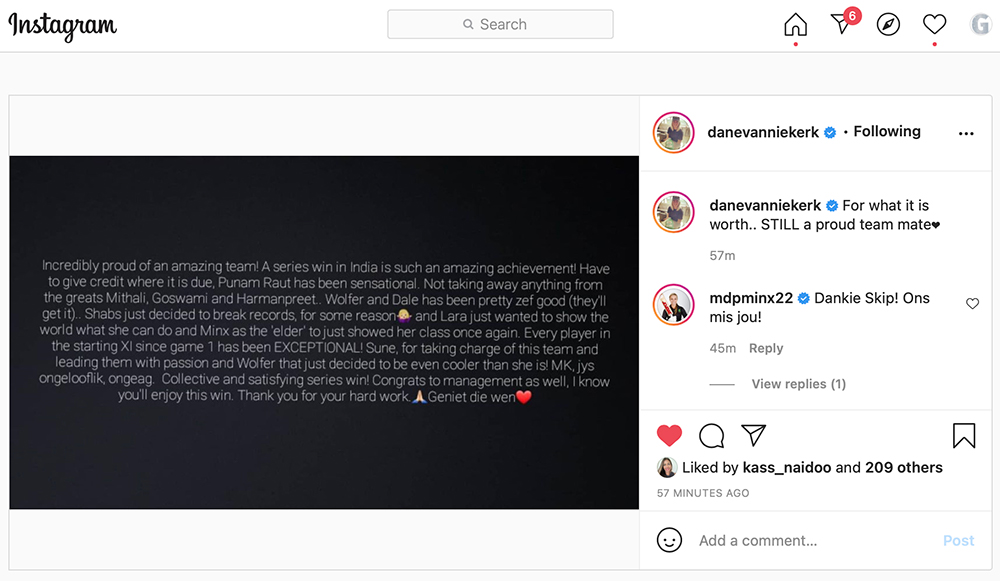 “Incredibly proud of an amazing team! A series win in India is such an amazing achievement! Have to give credit where its due. Punam Raut has been sensational. Not taking away anything from the greats Mithali (Raj), (Jhulan) Goswami and Harmanpreet (Kaur).

“Wolfer (Laura Wolvaardt) and Dale (Lizelle Lee) has been pretty zef good (they’ll get it) Shabs just decided to break records for some reason and Lara just wanted to show the world what she can do and Minx as the “elder” just showed her class once again,” she wrote.

History made as the #MomentumProteas record South Africa’s highest run chase in Women’s ODI cricket, chasing down 267 runs against India to win the fourth ODI and seal the series with a game to play 👏👏👏 #AlwaysRising #INDvSA #GoGirls pic.twitter.com/aciuWoziWg

Earlier, she watched with pride, as Lara Goodall’s career-best half century helped the Momentum Proteas complete their highest successful One-Day International chase as they beat India by seven wickets to surge into an unassailable 3-1 lead at the Ekana Cricket Stadium in Lucknow on Sunday, 14 March 2021.

Their chase beat the previous highest of 265 against England at Centurion in 2015/16 and also secured a third successive series triumph after they beat New Zealand (2020) and Pakistan (2021) in their previous two 50-over outings.

In between that, coach Hilton Moreeng’s charges also reached the T20 World Cup semi-final in Australia last year, an indication that they are a team making substantial gains in the world game.

What a series win for @OfficialCSA 🇿🇦, missing their two skippers Sune, Dane and Cherry they have managed to chase their highest total in ODI!! Very impressive and are building up nicely as an extremely strong contender for the @cricketworldcup in 2022. 👏🏽👏🏽

They had been impressive in their two wins so far on their tour to India, which is taking place in a bio-secure environment (BSE) in Lucknow, with their latest result meaning they have secured the series with a game to spare.

But they will go into that game on Wednesday full of confidence following Sunday’s assured win, built around the batsmen.

The bowlers had earlier conceded 266 for four after Wolvaardt, again standing in as captain for the injured Suné Luus, won the toss and opted to field first.

Harmanpreet Kaur also plundered 54 off 35 balls (7 fours, 1 six), while there were useful contributions from skipper Mithali Raj (45) and Priya Punia (32).

Brilliant from the Proteas. This is the reward for stability in selection and proactive promotion of women's cricket amidst a pandemic.

For the South Africans, Nondumiso Shangase (1/41) was most impressive, along with Ayabonga Khaka (0/26). Shabnim Ismail (1/50) also claimed a wicket, while the most successful bowler was Tumi Sekhukhune with two for 63.

With a huge target in front of them, the Proteas set out towards the target with an impressive Lee-Wolvaardt stand that yielded 116. The two set the tone from the outset by scoring 79 in the first 15 overs and that allowed for their side to stay ahead of the chase.

After both fell in quick succession, the baton was taken up boldly by Du Preez and Goodall. The two added 103 for the third wicket to drain the Indian bowlers and continue the momentum in favour of the tourists.

Du Preez was removed with 31 to get, but Marizanne Kapp stepped in an blasted 22 off 18 balls to help Goodall complete the job.

Photo 1 Caption: The Momentum Proteas team huddle after their impressive highest successful One-Day International chase as they beat India Women by seven wickets to surge into an unassailable 3-1 lead at the Ekana Cricket Stadium in Lucknow on Sunday, 14 March 2021. Photo: Koketso Gaofetoge (Twitter)